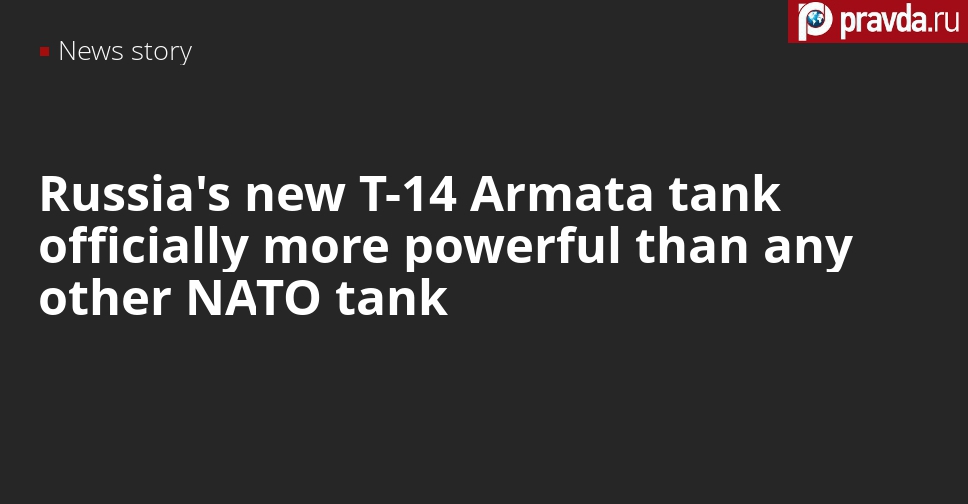 The range of the Russian Armata tank is three times higher than that of any other tank.

Russia’s state-of-the-art heavy tank T-14 Armata is capable of striking targets from 125-mm gun at distances up to 12 kilometers. This tank is three times more powerful than any other tank that exists in the world today. According to The Military Watch Magazine, such powerful performance of the Russian tank enables the Armata to single-handedly destroy enemy tanks even before they can come within the firing range.

The 3UBK21 Sprinter projectile was designed to surpass all known competitors and is reportedly capable of penetrating more than 900 mm of armor, which is considered sufficient to neutralize any existing NATO tank.


“The American M1A2 Abrams, which is widely considered the leading Western tank, by contrast has an engagement range of only 4 km meaning that the T-14 can shoot three times as far. The runner up to the T-14, the South Korean K2 Black Panther, can engage targets up to 8 km away, meaning the T-14 still has 50 percent more range than its top competitor,” The Military Watch Magazine said.


Experts note that systems of the Russian T-14 Armata tank can exchange data with other systems and complexes. In all likelihood, the tank can effectively strike targets at such large distances because of this peculiarity.