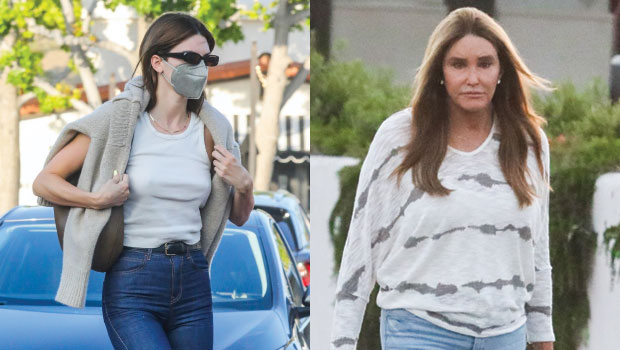 Kendall Jenner, 26, spent some quality time with Caitlyn Jenner, 72, on May 28. The model and her dad were photographed arriving at and leaving Lucky’s restaurant in Malibu, CA on Saturday as they donned casual but stylish outfits. Kendall’s outfit included a white tank top with a tan sweater, dark blue jeans, and black heeled boots while Caitlyn’s included a white and gray patterned long-sleeved top, jeans, and tan sandals.

Kendall added sunglasses to her look as her hair was down and she wore a gray face mask while around others. Caitlyn’s accessorized with earrings and had her hair down. Both of them carried purses and appeared relaxed as they chatted and laughed near the door of the dining location.

Kendall’s relaxed outing with her dad comes a week after she attended her older sister Kourtney Kardashian and Travis Barker‘s wedding in Italy. The beauty brought along her boyfriend Devin Booker as her date for the epic celebration and was spotted holding his hand as they mingled with other guests at one point. She also wowed in a tan sleeveless dress with a floral pattern at the event and her beau looked handsome in black blazer over a white button-down shirt and black pants.

Since Kendall and Devin tend to be as private as possible when it comes to their relationship, the wedding date was a bit of a surprise. A source recently told us the reason she thought it’d be “special” to bring him along to the romantic setting. “Kendall and Devin have been dating for a few years, but this was the first widely publicized family event that they attended together,” the source EXCLUSIVELY told HollywoodLife.

“It was really a last minute decision because they weren’t sure if Devin would be playing or not,” the source continued. “But the season for The Suns just came to an end after Game 7 so Kendall thought it would be special to have him join them in Italy. The whole family was hoping he could join them so it all worked out perfectly.”

The source concluded by revealing bringing Devin to the wedding was ” a big deal” because “she knew this would be taking the next step” in their relationship. “You can’t help but feel in love during such a romantic event, and it was definitely something they’ve talked about in recent months,” the insider explained. “They both know how young they are and that they have a huge career to juggle. But it’s working for them and being together at Kourtney’s wedding only brought them closer.”