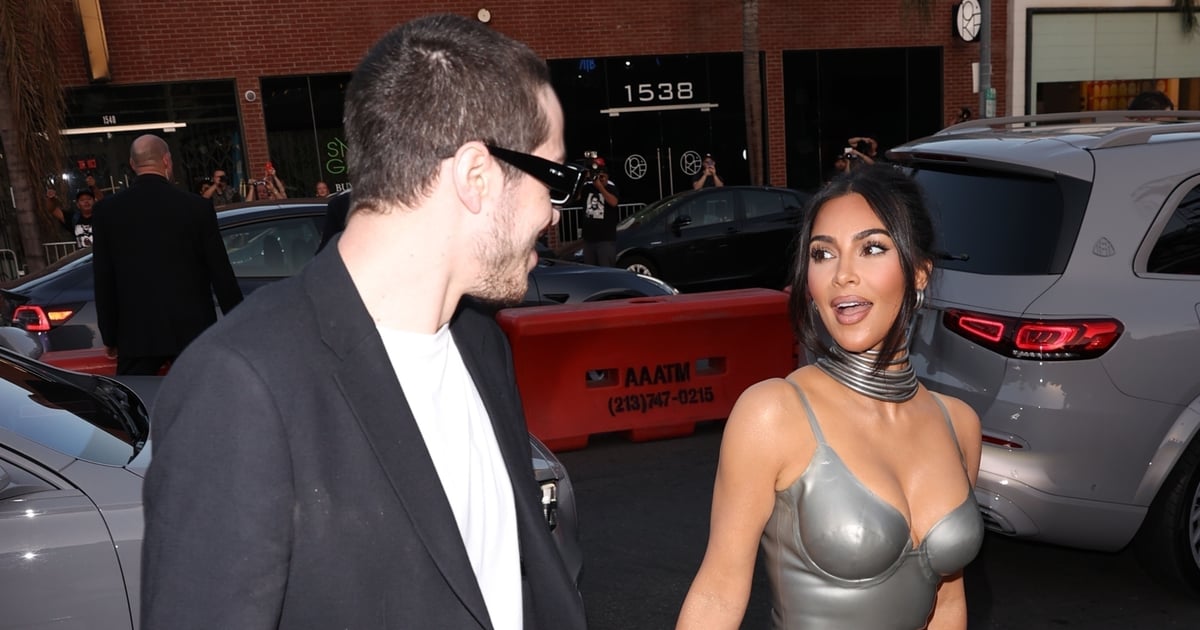 The Kardashians exuded “main character” energy at the premiere of their own show, “The Kardashians,” which will launch on Hulu on April 14. The family took over the red carpet at Goya Studios in Los Angeles in dazzling outfits that made it clear who the women of the hour were. Kim Kardashian paid tribute to the late Thierry Mugler in a custom body-sculpting gown styled by Dani Levi and designed by Mugler himself before he passed away in January this year. The Skims founder‘s metallic latex gown was quite a sensation with a built-in plunging bra top, a fitted bodice, and a floor-length mermaid hem featuring a thigh-high slit. That curved cutout detail allowed for a glimpse of her pointy mules, which had clear straps that nicely complemented the dress. The space-age ensemble was accessorized with a stack of metallic chokers that adorned Kim’s neck and were matched with silver bangles visible on both hands. Joining her at the premiere was her new boyfriend and comedian Pete Davidson, who donned a black suit by Midnight Studios by Shane Gonzales.

Meanwhile, Kourtney Kardashian also dressed as the star of the show, made an entrance in a dramatic Valentino cape dress from the fall 2022 collection. Flashing an underboob cutout that betrayed her otherwise demure silhouette, she posed with her fiancé, Travis Barker, whom she had an impromptu wedding ceremony with just days earlier.

“The Kardashians” is a follow-up to the long-running hit series “Keeping Up With the Kardashians,” which premiered in 2007 and aired its final episode in 2021. The Hulu show is said to provide a more intimate view of each family member rather than the family as a whole, as Kim told People in an interview. “Our last show showed us all together as a family all the time, so you’ll really see us individually and what we do on a daily basis and then kind of coming together,” she said. “It’s definitely more documentary style.”

Other notable attendees of the premiere include longtime family friends Khadijah Haqq McCray, Malika Haqq, and Jonathan Cheban; Scott Disick and his new girlfriend, Rebecca Donaldson; and Teyana Taylor. Catch all the red carpet looks ahead.