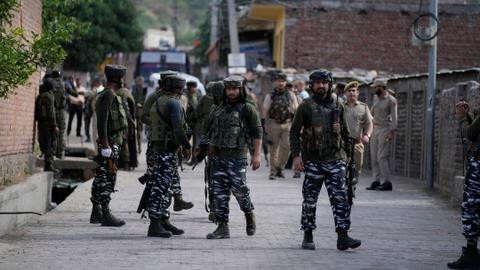 Two suspected separatists and a paramilitary officer were killed in a gunfight on the outskirts of the southern Jammu city, while government forces killed another four in Malwah, a village northwest of Srinagar city.

Six suspected rebels and an Indian paramilitary officer have been killed in two separate armed clashes in India-administered Kashmir.

A gunfight broke out on the outskirts of the southern Jammu city early on Friday after police and soldiers spotted a group of rebels in Sunjwan, a garrison town, police said on Friday.

Two rebels and a paramilitary officer were killed, and at least two soldiers and two police officials injured in the ensuing fighting, police said.

Troops were scurrying through the garrison area, which saw a major attack in 2018 that left at least five soldiers and one civilian dead.

At least four soldiers and a policeman were also injured in the fighting, a police statement said.

Police identified one of the slain rebels as Yousuf Kantroo and said he had been the longest surviving rebel commander in Kashmir.

The incidents come ahead of Prime Minister Narendra Modi’s visit to the disputed region.

Some 15 kilometres (9 miles) from Sunjwan, Modi is scheduled to speak on Sunday in his first public event in the region since New Delhi stripped it of its semi-autonomous status in 2019 and divided it into two directly governed territories.

The region has remained on edge ever since. Modi’s two earlier visits after 2019 were to military camps to celebrate a Hindu festival with soldiers.

India and Pakistan both claim the divided territory of Kashmir in its entirety. Rebels in the India-administered portion have been fighting New Delhi’s rule since 1989.

Tens of thousands of civilians, separatists and government forces have been killed in the conflict.