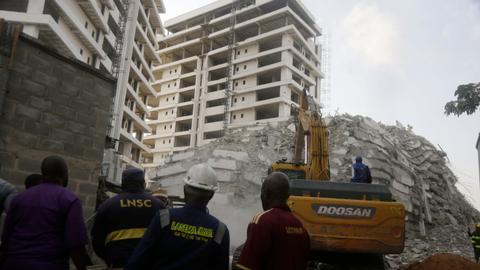 At least four people have been killed and dozens missing in Nigeria when a residential high-rise under
construction in the country’s commercial capital Lagos collapsed.

Lagos Police Commissioner Hakeem Odumosu confirmed the deaths, but added that three survivors had been pulled from the rubble in Ikoyi by Monday evening.

Officials arriving at the scene were confronted by crowds of people venting their anger that rescue efforts started several hours after the collapse.

Two workers at the site in the affluent neighbourhood of
Ikoyi, where many blocks of flats are under construction, told
Reuters that possibly 100 people were at work when the building
came crashing down.

There were heaps of rubble and twisted metal where the building once stood, as several workers looked on.

Olayemi Bello told The Associated Press that five of his friends were trapped in the building and he feared the worst.

It was not immediately clear what caused the collapse.

Breaking: Reports of people trapped after a 21 story building under construction collapsed in Lagos, Nigeria. pic.twitter.com/6KnzrfxlYu

“All first responders are at the scene while heavy duty equipment and life detection equipment have been dispatched,” the agency said in a statement.

The building was part of three towers being built by private
developer Fourscore Homes.

In a brochure for potential clients,
the company promises to offer “a stress-free lifestyle, complete
with a hotel flair”.

The cheapest unit was selling for $1.2
million.

Calls to the numbers listed for Fourscore Homes and the main
building contractor did not ring through.

Building collapses are frequent in Nigeria, Africa’s most populous country, where regulations are poorly enforced and construction materials often substandard.

Literally saw my life before me. A 12-storey building in Ikoyi collapsed before my eyes. A reminiscent of the 9/11.

I don’t think I’d be alive to tweet this if it were the one closer to our window. Our office was vibrating as the building was collapsing.