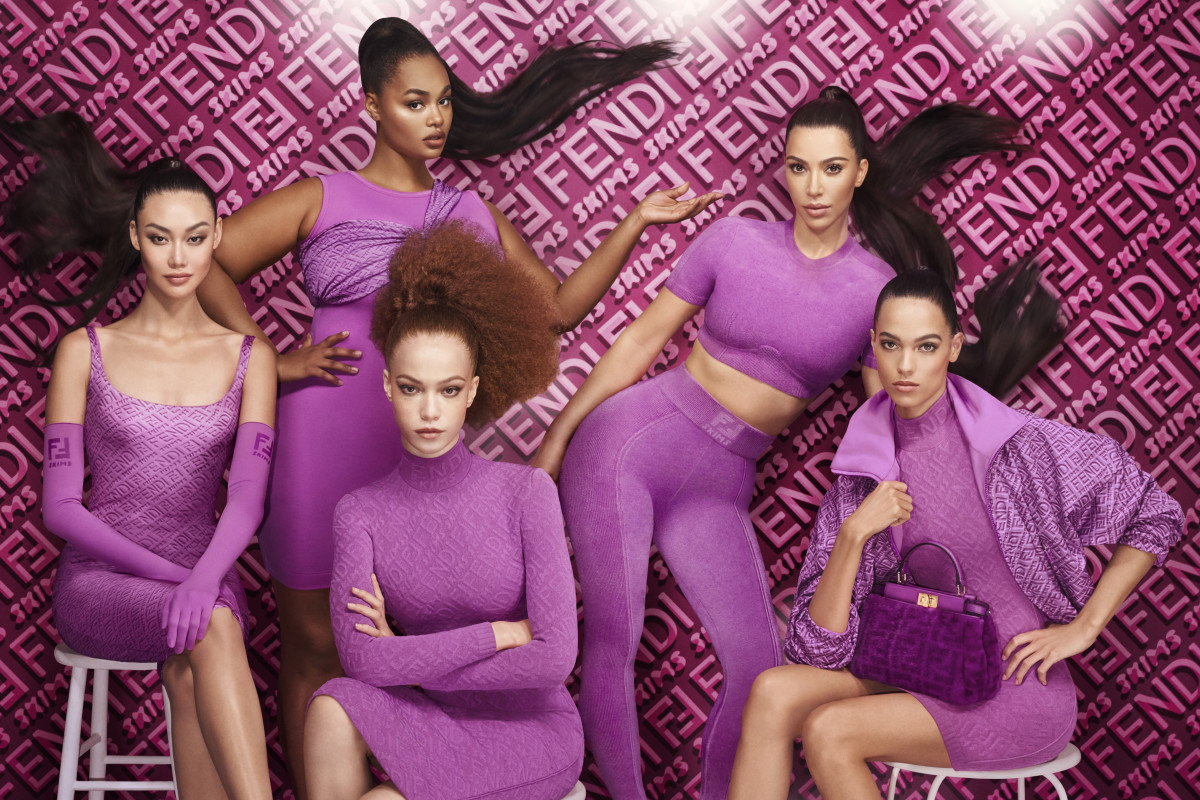 All the rumors are true: Kim Kardashian West is collaborating with Fendi on a co-branded Skims capsule, launching next month.

Kardashian confirmed the news on Instagram on Monday morning, posting a series of images of herself in a variety of pieces — a sheer black bralette and matching tights, a green bodysuit and lined puffer jacket, a brown bodysuit and a black long-sleeved bodysuit, all featuring both Skims’ and Fendi’s logos. “Introducing FENDI x SKIMS — a first of its kind collaboration that unites the luxury of @Fendi with the innovation of @SKIMS,” she wrote. “This limited edition collection launches on November 9 at 6am PST at www.fendiskims.com. #FENDIxSKIMS.”

There has been much speculation about a Kim x Fendi collaboration since Kardashian West visited the brand’s headquarters in Rome over the summer. (Plus, designer Kim Jones, currently creative director of womenswear for Fendi, has long been a friend.) The rumors intensified when a U.K.-based personal shopper posted what appeared to be images of the collection from a market preview to her Instagram Story in October, which were quickly deleted — but not before fans on social media screenshot and shared the pictures widely.

This marks Skims’ first big design partnership. According to Kardashian West’s post, the collection will be sold on its own website, fendiskims.com, starting on Nov. 9 at 9:00 a.m. EST/6:00 a.m. PST. She didn’t offer more details about the scope or the pricing of the line, but Jones did post more images of the collaboration, shot by Steven Meisel, to his Instagram.

Mark your calendars, folks — because this one is guaranteed to sell out.

The capsule was inspired by a Karl Lagerfeld collection from 1979, the brand said, “which placed a focal point on twisted tube tops, pop colors and tight sashes.” It spans apparel, swim, shapewear, underwear and hosiery.

In a statement, Kim Jones gave some more background about the origins of the surprising partnership: “The idea for the collaboration came about when my team and I were sitting around a table at the studio in Rome. Suddenly, all the women went silent and started looking at their phones. I didn’t know what was going on, but they were waiting for the launch of the new Skims collection. It was then that I thought: let’s do something together.”

Jones appeared alongside Kim Kardashian West on the cover of WSJ. Magazine to promote the upcoming launch. They told Christina Brinkley that they started talking about this project back in December 2020; they also revealed that Kardashian West served as the fit model. The publication also revealed some of the pricing: According to WSJ Magazine, Fendi x Skims apparel start at $950 for select tops and dresses, with leggings going for $1,110, a puffer jacket for $2,950 and a leather dress for $4,200.

Then, Donna Trope photographed Kardashian West wearing Fendi x Skims. You can see the images in the gallery, below.