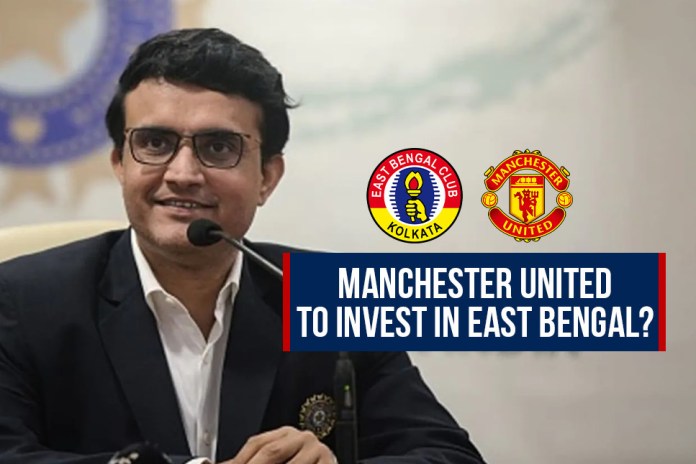 Manchester United East Bengal Deal – Man United to Invest in East Bengal – In one of the exciting news for Indian football, European football giants Manchester United are all set to tie up with Kolkata giants East Bengal for the upcoming season. Reports from Sangbad Pratidin claim that BCCI President Sourav Ganguly is at the center of facilitating this extraordinary move which can change the entire scene of football in India. East Bengal having cut off its ties with Sree Cement last month are devoid of any investors. Follow Indian Football Live Updates on InsideSport.IN

Reports as per various sources claim that many meetings between the two clubs have taken place in the current ongoing month. Though there has been no official statement from East Bengal, reports claim that it is very likely that Manchester United will be investing in the Red and Gold brigade.

Previously the name ‘Manchester United’ was heard before the Indian Premier League when the owners of the English Premier League club, the Glazers Family submitted their bids to buy one of the debutant teams for the IPL 2022 season. However, the Glazers failed to buy a club for IPL after having submitted a substantially reduced bid in comparison to the others.

Following the departure of previous investors Sree Cement, East Bengal has been under a bit of worry in its search for new investors. The Kolkata giants have also ventured into other avenues, and one of the main names that have appeared on the scene is the Bashundhara group from Bangladesh.

🚨 | PL Giants Manchester United are closing in on talks with East Bengal club over a potential investment deal. The EB club officials have met with MUFC more than once this month. Ex EB cricketer Sourav Ganguly is facilitating the talks. [Sangbad Pratidin] #IndianFootball pic.twitter.com/KqjJqHDsgD

Both the officials of East Bengal and Bashundhara groups have traveled to both India and Bangladesh where talks have progressed quite a lot. However, nothing concrete has been agreed and no official confirmation among both the parties has sufficed.

East Bengal shared a troubled relationship with the Sree Cement. The supporters of the Red and Gold brigade

however now will be happy knowing that a deal with one of the biggest clubs in World Football can be possible. And if reports are to be believed then the chance of the deal concluding can be well possible.