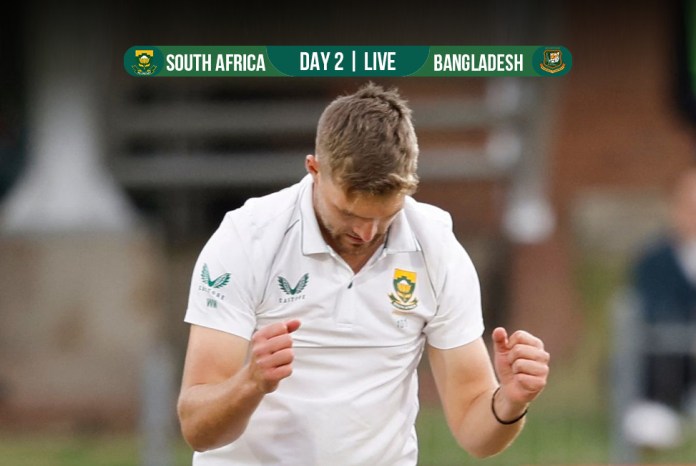 SA vs BAN LIVE Score: South Africa vs Bangladesh Live – Bangladesh left-arm spinner Taijul Islam took 6-135 but the touring side are behind in the game after they limped to 139 for five at the close on day two of the second and final Test against South
Africa on Saturday. Bangladesh are still 314 runs behind their hosts’ total of 453 all out at St George’s Park and their first aim will be to avoid the follow-on when Mushfiqur Rahim (30 not out) and Yasir Ali (8 not out) resume on the third morning. Follow SA vs BAN LIVE Updates on Insidesport. IN.

Seamer Wiaan Mulder (3-15) has been the pick of the home bowlers, removing Tamim Iqbal lbw for a brisk 47. He did likewise to Najmul Hossain Shanto (33) as Bangladesh suffered a double blow following a solid start to their innings.

Mulder bagged his third lbw of the innings when he snared captain Mominul Haque (6) as he bowled a superb tight line with just a hint of swing into the pads. Bangladesh also lost first Test centurion Mahmudul Hasan Joy for a duck as he edged seamer Duanne Olivier (2-17) to Sarel Erwee at first slip, and Olivier bowled the dangerous Litton Das (11) with a superb delivery that knocked over middle stump.

South Africa, who lead 1-0 in the series following a 220-run victory in Durban, had resumed their first innings on 278 for five having won the toss. Captain Dean Elgar spoke before the game of the importance of the batsmen scoring hundreds after a barren run for the side, but the latest to fail was spinning all-rounder Keshav Maharaj, who compiled an excellent 84 from 95 balls before he was bowled following an ugly swipe across the line off the bowling of Taijul.

Elgar (70), Temba Bavuma (67) and Keegan Petersen (64) also passed 50 but failed to bring up three figures. It was, however, the first time in Test history that nine batsmen reached 20 in a completed innings. Taijul brought up 150 Test wickets as he bowled with superb control on his return to the side having replaced injured seamer
Taskin Ahmed in the side.

South Africa: South Africa are going in with the same team. Lutho Sipamla was unavailable for selection due to a hamstring strain.

@17:44 WICKET! Lizaad Williams goes for a slog sweep but misses the delivery from Mehidi Hasan Miraz and the umpire raises his finger.

@17:40 WICKET! Brilliant piece of stumping from Litton Das. He just loses his balance and raises his feet and Litton takes off the bails exactly when the foot was in the air.

@16:45 WICKET! Keshav Maharaj looks to go big over deep midwicket but misses the Taijul Islam delivery completely as it crashes the stumps. His fine knock comes to an end.

Hosts South Africa will look to impose another trial by spin on seething tourists Bangladesh in the second and final Test starting at St George’s Park in Gqeberha, formerly Port Elizabeth, on Thursday.

The home side completed a dominant 220-run victory in the first Test on Monday, bowling Bangladesh out for a paltry 53 in a second innings which lasted only 19 overs.

SA vs BAN LIVE:  The visitors’ management were unhappy with some of the decisions from local umpires Marais Erasmus and Adrian Holdstock in Durban and promised to lodge a formal complaint with the International Cricket Council.

SA vs BAN LIVE:  The pitch is expected to be low and slow at St George’s Park and unlikely to produce the same bounce as Kingsmead, which will be more to the liking of the visitors.

“We played well in four out of five days,” Mominul added. “There are enough positives to suggest to me that we can bounce back easily in the next game.”

South Africa are without six regulars, with five playing in the Indian Premier League, including their entire first choice seam attack. Those absences forced them, in a way, to play two spinners and captain Dean Elgar does not foresee too many changes for the second Test, especially with such a quick turnaround.

“It shows a lot of character with regards to adapting and being put in conditions we are not familiar with,” Elgar said. “It also shows a lot of strength within our group that we have the resources to adapt.

“We play quite a lot of cricket in the sub-continent. It was great to expose our bowling attack to having two spinners operating in tandem. There’s so many positives out of that.”

Where will the SA vs BAN Test Series take place?

The SA vs BAN Test Series will take place in South Africa.

When will the SA vs BAN 2nd Test Start? – Date

What Time does the SA vs BAN 2nd Test begin? – Time

What are the venues for the SA vs BAN Test Series? – Venue

The SA vs BAN 2nd Test will be played at St.George’s Oval.

How to watch SA vs BAN Test Series Live Streaming?

SA vs BAN LIVE Streaming In India: Star Sports will broadcast the live telecast of the Bangladesh vs South Africa Test matches. Disney Hotstar will live stream the matches on its app.

SA vs BAN LIVE Streaming In Bangladesh: In Bangladesh, Star Sports will present the live telecast. The live streaming will be available on Disney Hotstar App. The match will also be shown LIVE on GAZI TV.