The 21-year-old is playing his first full year of NRL footy, having replaced Rabbitohs legend Adam Reynolds in the No.7 jumper following the latter’s departure.

Reynolds and Ilias will face off for the first time tonight when the Bunnies host the Broncos at Accor Stadium.

It hasn’t been an easy task replacing the halfback who won the 2014 NRL premiership with South Sydney, but Johns has been impressed by young Ilias.

Speaking to Wide World of Sports’ Immortal Behaviour, Johns pointed to a try Ilias scored against Manly last week, where he barrelled his way to the line.

“I went ‘now I can see what they’re seeing’,” Johns said.

“Big body. I didn’t realise how big a body he is – he’ll end up 92 or 93kg. Strong defender, his kicking game is really good, his ball-playing.

“But that passage of play where he went to pass then reacted to the defence – he’s got vision, he backs himself to run the ball, he’s tough.

“He is going to get better and better. 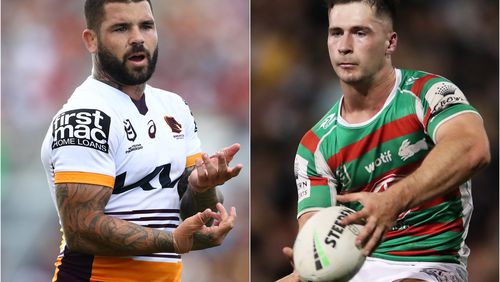 Ilias is still in his first proper season in the NRL but Johns can see representative jumpers in his future.

His main rival for those honours will be Penrith halfback Nathan Cleary, who is the NSW Blues No.7 and is gunning for the Australian jumper currently held by Daly Cherry-Evans.

“I can see (Ilias is) working hard on his game. I think moving forward he’s a potential representative player at halfback,” Johns said.

“I don’t think he will go past Nathan while Nathan is at his best, (but) getting to his late 20s I think he will be playing rep footy for sure.

“I would have loved to see Adam Reynolds play his whole career at Souths, but I think it’s been a win-win-win for everyone.”