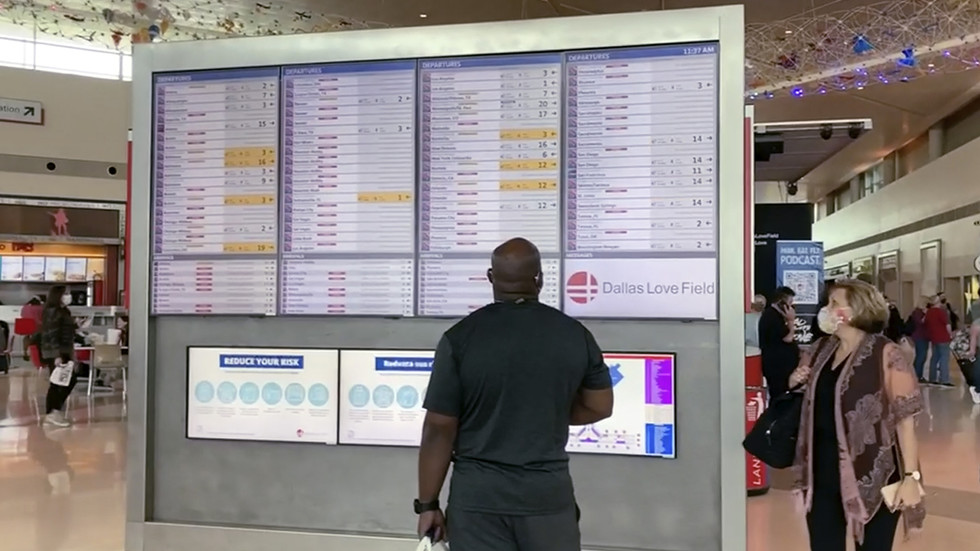 Thousands of passengers that booked Southwest Airlines flights for their weekend travel have been stranded in the US airports after the airline cancelled the flights amid reports of a protest against the vaccine mandate.

SouthWest, known for its relatively low prices, cancelled at least 1,018 flights on Sunday, that is in addition to 808 flights that were cancelled on Saturday, US Today reported, citing flight tracking data.

In a statement on Saturday, SouthWest blamed the abnormal rate of cancellations on air traffic control issues and “disruptive weather,” adding that they were working to “recover” the operation.

ATC issues and disruptive weather have resulted in a high volume of cancellations throughout the weekend while we work to recover our operation. We appreciate your patience as we accommodate affected Customers, and Customer Service wait times are longer than usual. (1/2) pic.twitter.com/o1scQJ5lLb

However, the situation appeared to have only worsened on Sunday, with SouthWest account on Twitter being inundated by complaints from the disgruntled passengers claiming that flights had been cancelled out of the blue and that the airline’s employees were nowhere to be seen.

“Flight cancelled out of nowhere and now NO ONE is seen at the front desks to assist customers,” actor Kevin Michael Martin complained.

. @SouthwestAir update… Flight cancelled out of nowhere and now NO ONE is seen at the front desks to assist customers. This is the worst representation of customer service I’ve ever witnessed in my life. pic.twitter.com/3VUemrW0IW

Another passenger, who has been apparently stranded at a Dallas, Texas, airport, posted a photo of a long line of people, tweeting: “Ticket agent counter before security is a mess,” to which SouthWest responded by insisting that the chaos was merely a result of “ATC issue and disruptive weather.” “Thanks for hanging in there with us today,” SouthWest said.

Southwest Airlines Pilots Association (SWAPA), which represents some 10,000 pilots, also poured cold water on the speculations of an ongoing strike, saying on Sunday that the group was “focused on the safety of our crews, passengers, and overcoming operational challenges, not unofficial job actions.”

SWAPA is aware of operational difficulties that affected SWA yesterday but our Pilots are focused on the safety of our crews, passengers, and overcoming operational challenges, not unofficial job actions. To read our latest statement, click here: https://t.co/YkDim72SMJhttps://t.co/Tx46PQRjZG

Responding to the rumours of a mass walkout on Sunday afternoon, The Federal Aviation Administration (FAA) dismissed the report, insisting that “no FAA air traffic staffing shortages have been reported since Friday.” “Flight delays and cancellations occurred for a few hours Friday afternoon due to widespread severe weather, military training and limited staffing in one area of the Jacksonville Air Route Traffic Control Center,” the agency said.

Jacksonville Aviation Authority Chief Operating Officer Tony Cugno reportedly sent an email to the JAA board of directors, pinning the blame for the havoc on some of the employees taking their “normal approved leaves” and controllers having to stay at home for 48 hours after receiving their Covid-19 vaccine shot.

BREAKING: I have obtained this email sent by Jacksonville Aviation Authority COO Tony Cugno to the JAA board of directors regarding the delays at JIA on Friday that refutes “rumor”of an organized walkout by controllers regarding vaccination mandate @ActionNewsJaxpic.twitter.com/wBSOTacvd2

SouthWest Airlines became one of the last major US air carriers to introduce a vaccine mandate for its employees last Monday after the company was reportedly pressured by White House coronavirus adviser Jeffrey Zients to comply with President Joe Biden’s vaccination order. Some 56,000 SouthWest employees have until December 8 to get vaccinated if they want to keep their jobs.

Biden’s order states that companies with over 100 employees must either require the workers to get the Covid-19 jab or to test weekly for the virus.