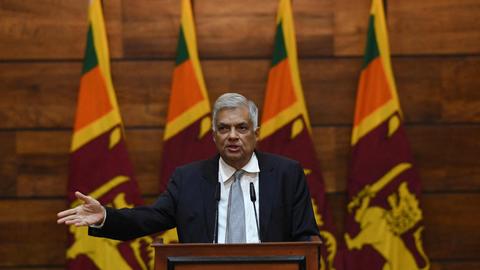 Ranil Wickremesinghe has served in the office five times and will be tasked to address a crippling economic crisis that has sparked deadly protests and stirred the political establishment.

Five-time former Sri Lankan Prime Minister Ranil Wickremesinghe has been reappointed in an effort to bring stability to the island nation that is in the grip of an economic and political crisis.

Wickremesinghe, 73, who has never completed a full term in office, took his oath before President Gotabaya Rajapaksa at a ceremony in the president’s office on Thursday.

His career appeared to be drawing to a close before this week, when he agreed to helm a unity administration and help steer the South Asian nation of 22 million people through a turbulent phase.

Objecting to his appointment for a sixth time, some opposition and religious leaders said citizens wanted sweeping reforms.

Lawmaker Anura Dissananayake said the president’s choice of Wickremesinghe was more about protecting him and his family from public anger over his role in the economic crisis than solving the country’s problems.

When he was foreign minister from 2015 to 2019, Wickremesinghe was accused of protecting the powerful Rajapaksa family from allegations of corruption and other wrongdoing.

For weeks, protesters have been demanding that both Rajapaksas resign over a debt crisis that has nearly bankrupted the country and caused severe shortages of fuel, food and other essentials.

A court has banned the former prime minister, his son and allies from leaving the country, after ordering an investigation into the violence that has left nine people dead over 200 injured.

While President Gotabaya Rajapaksa has stopped short of yielding to demand that he follow in his brother’s footsteps and quit, he has pledged to give up most of his executive powers and set up a new cabinet this week.

The new premier, Wickremesinghe, is the sole parliamentary representative of the United National Party, a once-powerful political force that was nearly wiped out in Sri Lanka’s last elections.

The former lawyer, who has been in Parliament for 45 years, hails from a political family and his uncle Junius Jayewardene served as president for more than a decade.

The new prime minister will likely present a Cabinet list to the president for appointment, a power vested in him by the constitution.

If there are any objections to the prime minister or the new Cabinet, lawmakers can submit a no-confidence motion to the house speaker when the body reconvenes on Tuesday. The motion would then be debated and voted on.

Wickremesinghe’s reputation was damaged during his previous term as prime minister, when he was in a difficult power-sharing arrangement with then President Maithripala Sirisena.

He was also accused of shielding a friend he appointed as head of the Central Bank from allegations of insider trading.