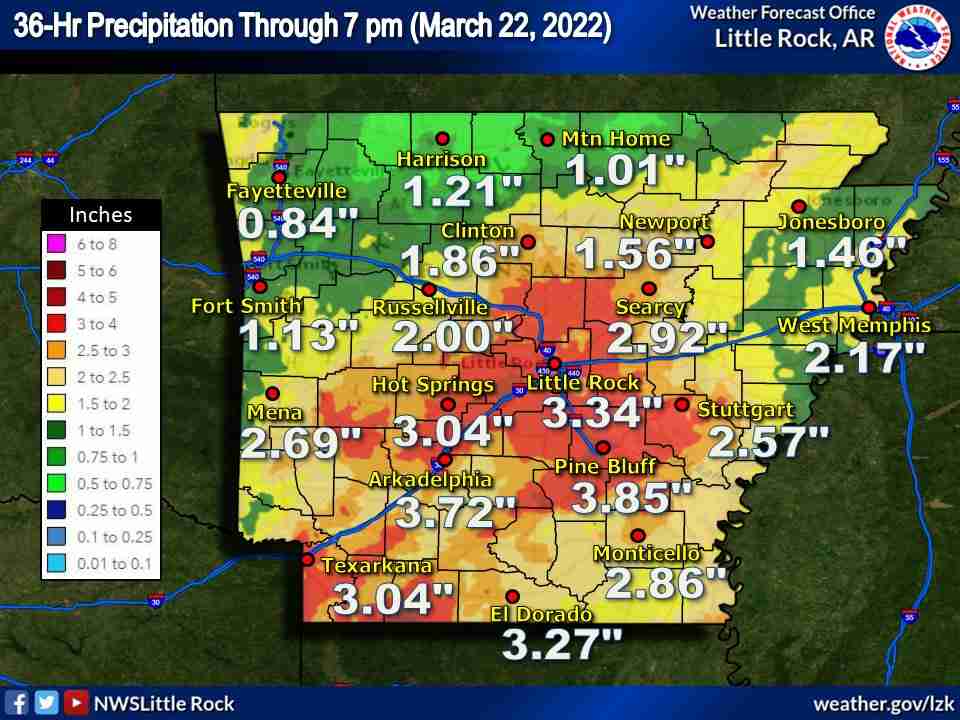 LITTLE ROCK — Despite a daylong deluge that reached almost every corner of the state Tuesday, field preparation efforts, particularly those in the Delta region of Arkansas, will likely be unaffected, for better or worse.

Kevin Norton, a Cooperative Extension Service agent currently serving as staff chair for both Ashley and Chicot counties in southeastern Arkansas, said that fieldwork was already at a standstill for many growers in the area, even before Tuesday’s rainfall.

“We’re in drought conditions as far as the map goes, but our topsoil was still a little wet for field prep this week,” Norton said. “We’re still waiting for it to dry out enough to get in there — hopefully we can be planting corn by the end of this week.”

Heather Reed, Desha County staff chair, said her area was in a similar state of affairs: The county had been in drought conditions for several weeks before receiving about three inches of total rain Monday and Tuesday.

“There have been farmers in the field, but nothing planted yet,” Reed said.

According to the National Weather Service at Little Rock, the March 21-22 pattern produced between 0.84 inches at Fayetteville up to 3.85 inches of rain at Stuttgart. The heaviest rain fell in an area roughly bounded by Texarkana to the southwest, Searcy to the northeast, Pine Bluff to the southeast, and Cleburne County to the north.

Last year, it was a different story. During one 48-hour period in the first week of June 2021, the National Weather Service recorded a historic 19 inches of rainfall at Dumas, as well as substantial amounts throughout the larger Delta region, incurring more than $200 million in crop loss for Arkansas growers.

Despite the recurring rains that have kept growers out of the field, many are in better shape this year than others, with most of the necessary work having already been done earlier in the year. The fall and winter of 2018-2019, by comparison, were dominated by six months of near-weekly rains, delaying even preliminary field preparations for some growers until the last week of March.

Jeremy Ross, extension soybean agronomist for the University of Arkansas System Division of Agriculture, said this year’s conditions represent a significant improvement over the recent past.

“I’ve talked to several farmers, and they all are chomping at the bit to get fieldwork started,” Ross said. “There was more fieldwork done this past fall than the previous two years. I’ve seen a few tractors moving through fields over the past two weeks, but the frequent rainfalls have prevented may from getting started. If we can get a break in the rainfall, most will be in the fields.”

Scott Hayes, extension agent for Drew County, said many of constituents are ahead of the game overall and are happy the move into the planting phase as weather allows.

“A lot of fieldwork was done in fall 2021 for Drew County,” Hayes said. “There were a few dry days in January and February that farmers were able to work in the field, either spraying burndown herbicide or doing light tillage to fill in late-season harvest ruts.

“It seems the past few years have been the ‘same song, second verse’ as far as weather,” he said. “We stay wet in the early spring, hit a dry spell and plant everything we can until the next rain.”