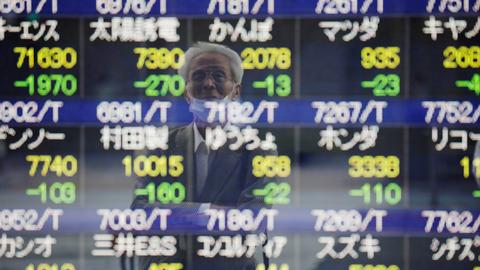 Covid-19 has infected more than 260M people and killed over 5.1M. Here are the latest developments related to the global Covid-19 crisis.

Stocks have seen their
largest weekly drop in nearly two months, while safe
haven assets such as bonds and the yen rallied as a new virus
variant added to swirling concerns about future growth and
higher US interest rates.

The variant, detected by scientists in South Africa, may be
able to evade immune responses and has prompted Britain to
hurriedly introduce travel restrictions on South Africa.

South Africa’s rand fell 1 percent in early trade on Friday, as did
US crude futures.

“The trigger was news of this Covid variant…and the
uncertainty as to what this means,” said Ray Attrill, head of FX
strategy at National Australia Bank in Sydney.

“You shoot first
and ask questions later when this sort of news erupts.”

Japan’s Nikkei was down 1.7 percent in early trade and
Australian shares fell 0.6%.

Little is known about the new variant. However, scientists
told reporters it has a “very unusual constellation” of mutations,
concerning because they could help it evade the body’s immune
response and make it more transmissible.

Brazil registered 303 deaths and 12,126 additional cases, according to data released by the nation’s Health Ministry.

The South American country has now registered a total of 613,642 coronavirus deaths and 22,055,238 total confirmed cases.

Authorities on the Caribbean island of Martinique have ordered a curfew after protesters looted shops and set up burning barricades as demonstrations against Covid protocols spread across France’s overseas’ territories.

Martinique and neighbouring Guadeloupe have been hit by violent unrest over the last week after the government imposed tougher measures to curb the spread of the pandemic.

Compulsory vaccination for health workers, a measure already introduced in the rest of France, has added to a sentiment among the majority Black population of being excluded and marginalized from the mainland.

Some have called the mandate a throwback to the slavery era, insisting they should be allowed to make their own choices about health treatment.

Morocco to suspend flights with France

Morocco has decided to push back its decision to suspend flight with France into Sunday instead of Friday as originally announced, the state news agency reported.

The agency quoted the Inter-ministerial Committee in charge of coordinating international travel during the pandemic as saying that the decision is aimed at facilitating the return of citizens and residents.

Morocco has imposed a vaccine pass for access to public places after it vaccinated over 50 percent of its population.

Morocco had previously canceled flights with Russia, the UK, and the Netherlands over Covid-19 concerns.