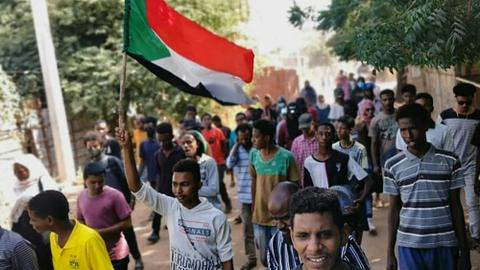 The anti-coup movement rejected power-sharing with the army and called for the establishment of a civilian government to lead a transition to democracy.

The movement called for the establishment of a civilian government to lead a transition to democracy.

The call came as a leader of the country’s main political party accused the military leadership of negotiating in bad faith.

The Sudanese Professionals’ Association, which led the uprising against al Bashir, said late Friday that mediation initiatives which “seek a new settlement” between the military and civilian leaders would “reproduce and worsen” the country’s crisis.

The association vowed to continue protesting until a full civilian government is established to lead the transition.

Under the slogan of: “No negotiations, no compromise, no power-sharing,” the association, which has a presence across the country, called for strikes and civil disobedience Sunday and Monday.

The Sudanese military seized power on October 25, dissolving the transitional administration and arresting dozens of government officials and politicians.

The coup has been met with international outcry and massive protests in the streets of Khartoum and elsewhere in the country.

The takeover has upended the country’s fragile planned transition to democratic rule, more than two years after a popular uprising forced the removal of longtime autocrat Omar al-Bashir and his Islamist government.

Since the coup, the international community has accelerated mediation efforts to find a way out of the crisis, which threatens to further destabilize the already restive Horn of Africa region.

On Thursday, the top US diplomat spoke separately by phone with the military leader, Gen. Abdel-Fattah Burhan, and Abdalla Hamdok, the deposed prime minister who was put under house arrest during the coup.

Secretary of State Antony Blinken urged for an immediate return to a civilian-led government and for the release of those detained in connection with the coup.

READ MORE: Q&A: Why is there a standoff in the Sudan coup?