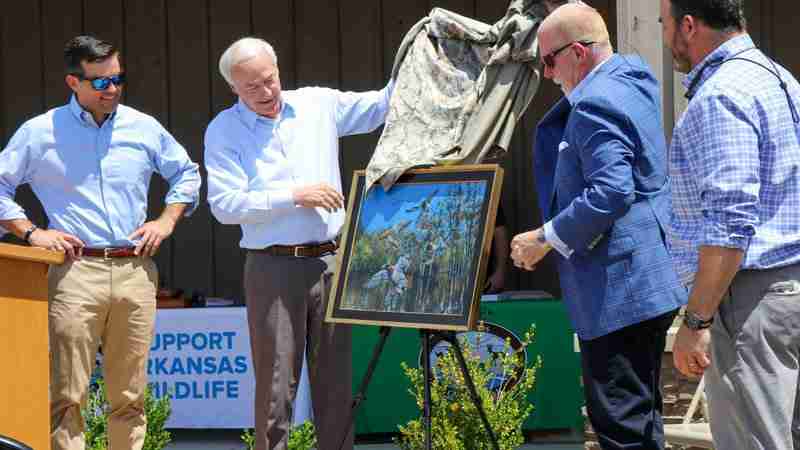 STUTTGART — Set among a backdrop filled with the sounds of soft greeting calls and the smells of a duck blind breakfast, Arkansas Gov. Asa Hutchinson joined the Arkansas Game and Fish Foundation and Arkansas Game and Fish Commission to unveil the 41st annual state duck stamp in front of the crowd gathered in Stuttgart for Callapalooza 2022 Saturday morning.

Artist Clay Connor created the artwork for this year’s Arkansas state duck stamp, one of many honors he has accomplished in his career through both camera and brush. The piece, “Sunlit Mallards at Slick’s”, depicts that moment of decision for hunters when the ducks are filtering through the flooded timber, illustrating Connor’s favorite term from his friend Jim Ronquest of Rich-N-Tone Calls, “Boots down.”

The artwork was presented briefly the previous evening at a closed showing among Connor’s friends at Slick’s Stuttgart Hunting Club, where the scene had been set.

“When we talk about a duck stamp, it would be just as easy to convey that legal privilege as a license you could print out on your printer at home, so why do we go through the trouble of creating this stamp?” AGFC Director Austin Booth said. “To remind people that the real privilege is that we are Arkansans who enjoy not only the perfect waterfowl habitat but also the knowledge that we live in a state where this resource is treasured. The real privilege that we celebrate is that connection we enjoy between Arkansans and ducks, and this is exactly what the duck stamp celebrates.”

Hutchinson echoed Booth’s sentiment, adding that waterfowl hunting not only is vital to Arkansas’s economy but to its place in the outdoor world.

“Of all the things and all the money that [Arkansas] brings in outdoor sports, nothing tops the cultural importance of our duck-hunting history,” Hutchinson said. “Thank all of you for being a part of this important part of Arkansas’s economy and our culture.”

Arkansas’s annual waterfowl stamp costs $7 for residents and $35 for non-residents. Hunters must carry proof of purchasing this stamp on their person in addition to a valid hunting license, Harvest Information Program registration, and a Federal Migratory Bird Hunting and Conservation Stamp to hunt waterfowl in Arkansas.