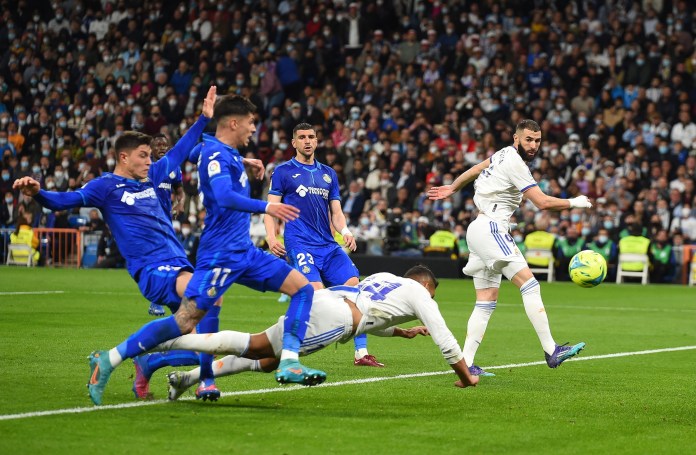 Real Madrid vs Getafe LIVE: Real Madrid Latest Team News – Real Madrid come into this game having thrashed Chelsea 3-1 in the Champions League and have a comfortable 9 point gap in the La Liga table. The last time these two sides met Getafe ended Real Madrid’s 15 games unbeaten run. Los Blancos will look for revenge but even a draw would suit them as they look to rest a few players for the UCL 2nd Leg. Follow InsideSport.IN for more updates

Real Madrid defender Eder Militao has been cleared to play despite suffering a knock against Chelsea, but the Brazilian is suspended for the second leg against the Blues next week, so Ancelotti could decide to select Nacho here, as the Spaniard is likely to be required for the quarter-final second leg.

Eden Hazard, Isco and Luka Jovic remain on the sidelines through injury, but the league leaders have no other concerns heading into the contest with Getafe.

Ancelotti is expected to resist the temptation to make wholesale changes from Wednesday night, but Lucas Vazquez, Nacho, Eduardo Camavinga and Marco Asensio could all come into the side, with Luka Modric and Toni Kroos potentially being rested ahead of the second leg with Chelsea.

Sabit Abdulai remains out with a knee injury, while Mauro Arambarri will be unavailable for selection this weekend due to a suspension. Jaime Mata could potentially recover from injury and Jorge Cuenca and Jakub Jankto are both available following suspensions.

Sandro Ramirez and Enes Unal are likely to feature as the front two in a 3-5-2 formation, and Arambarri’s absence could open the door for Gonzalo Villar to start in central midfield.

Real Madrid vs Getafe LIVE: When, Where, How to watch the live streaming of La Liga matches?

When will Real Madrid vs Getafe be played? – Date

Real Madrid vs Getafe will be played on 10th April 2022

What time will Real Madrid vs Getafe be played? Time
RMA vs GET match will kick-off at 12:30 AM IST

Where will Real Madrid vs Getafe be played? – Venue
RMA vs GET will be played at Estadio Santiago Bernabeu

Who will be the Match Official for Real Madrid vs Getafe? Referee

Cesar Soto will be the referee for the game

Where will the La Liga matches be broadcasted in India?
For Indian fans, the new season of La Liga will be broadcasted on Viacom18’s flagship youth brand channel MTV and OTT platform, Voot Select. The three-year partnership with India’s youngest and leading media conglomerate, which was announced a few months earlier, will bring the premier Spanish football league to fans in the country with a fresh and exciting feel.

MTV relaunched LaLiga on Indian television with a quirky campaign that promised Zero Masala, Pure Football. The innovative campaign, which includes quirky films and engagement with Football fan groups across India, is making an enormous impact on social media. The campaign has delivered a whopping 38M Reach & 50M Impressions while drawing in passionate responses on social media too.