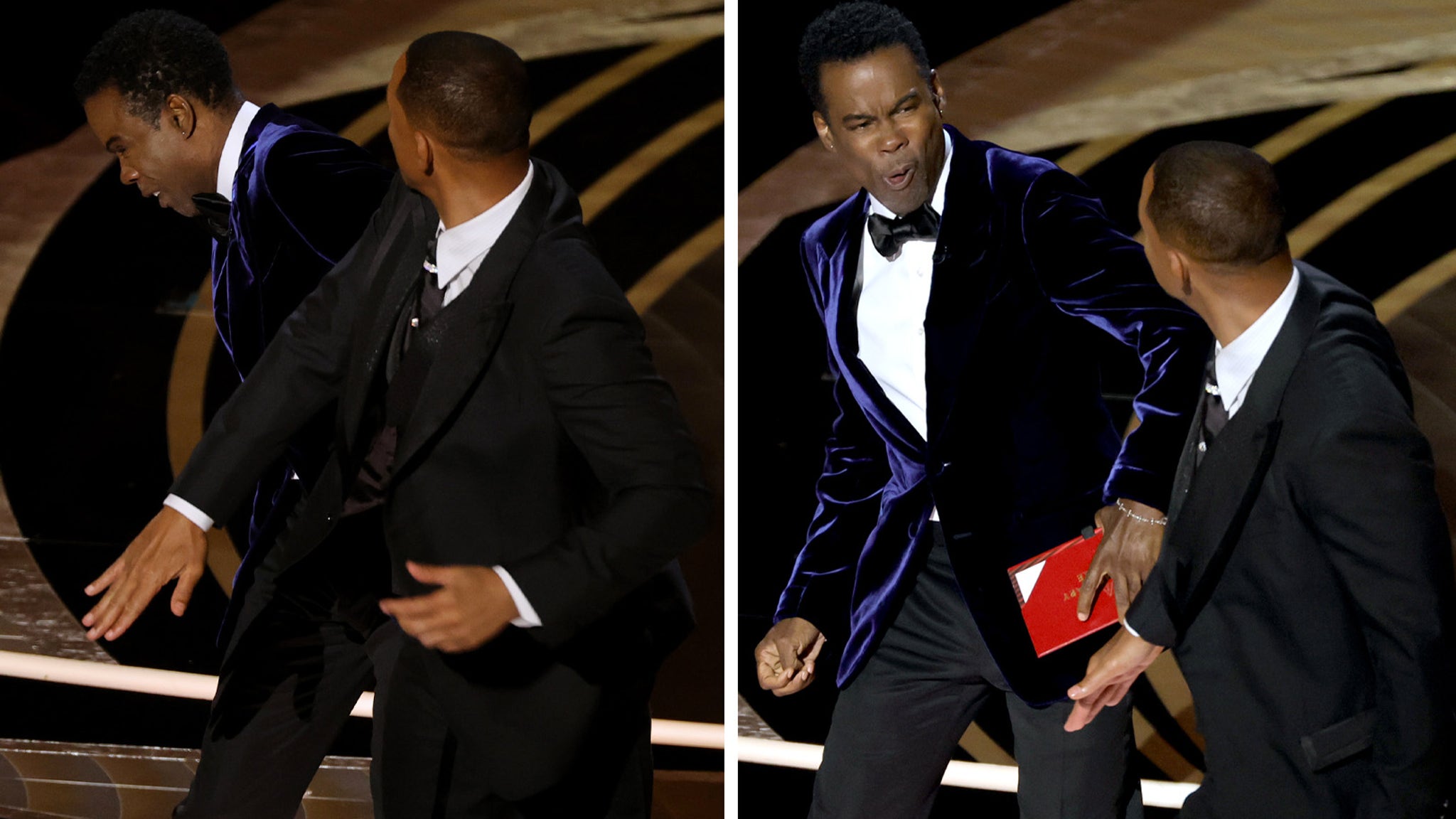 “I knew nothing about it. I was like, ‘What the f— is happening right now?'”

As awards show season comes to an end, there have been some pretty memorable moments — from unexpected wins to incredible performances to that infamous slap delivered by Will Smith at the Oscars. And while Will’s on-stage altercation definitely created headlines surrounding the usually prim and proper award show, it’s certainly not the first time something dramatic has happened at the Academy Awards.

In fact, throughout the years, there’s been some pretty chaotic moments at the annual ceremony including an award that was handed out by mistake, a shocking on-stage makeout session and a totally improvised finale!

In one of the most shocking moments in recent Oscars history, Will Smith slapped Chris Rock while the comedian was speaking on stage. Will decided to approach the stage after Chris made a joke about his wife Jada and her shaved head — which is a result of her battle with alopecia. While viewers were initially unsure if the physical altercation was part of a skit, it became clear it wasn’t when Will returned to his seat and screamed “Keep my wife’s name out of your f—ing mouth.” Will later issued an apology and condemned his own use of violence to handle the situation.

“Violence in all of its forms is poisonous and destructive. My behavior at last night’s Academy Awards was unacceptable and inexcusable. Jokes at my expense are a part of the job, but a joke about Jada’s medical condition was too much for me to bear and I reacted emotionally. I would like to publicly apologize to you, Chris. I was out of line and I was wrong. I am embarrassed and my actions were not indicative of the man I want to be. There is no place for violence in a world of love and kindness,” Will wrote on Instagram.

On April 1, the actor resigned from the Academy, calling his actions “shocking, painful, and inexcusable.”

Following an investigation, the Academy of Motion Picture Arts and Sciences revealed Will’s punishment in a statement on April 8, announcing that the “King Richard” star is banned from attending all Oscars events for 10 years. However, Will can still be nominated and win — but wouldn’t be able to accept either in-person or via video.

During the final moments of the 2017 Oscars ceremony, a dramatic moment unfolded when the wrong name was read out loud for the winner of the Best Picture category. Presenters Warren Beatty and Faye Dunaway were given the wrong envelope and accidentally named “La La Land” the winner — and the cast was almost halfway through their speeches when the mistake was realized. After some confusion on stage, “Moonlight” was announced as the real winner.

When Halle Berry presented Adrien Brody with the Oscar for Best Actor, she was in for a shock. As the actor joined Halle on stage, he grabbed her and surprisingly gave her a massive kiss. Looking back, Halle says she doesn’t even know if it was a good kiss or not because she was so confused about what was going on.

“No, that was not planned. I knew nothing about it. I was like, ‘What the f— is happening right now?’ That is what was going through my mind. And because I was there the year before and I know the feeling of being out of your body, I just f—ing went with it,” Halle later said on “Watch What Happens Live.”

4. Cuba Gooding Jr. Does a Backflip

In 1997, Cuba Gooding Jr. was awarded the Oscar for Best Actor in a Supporting Role for his role in “Jerry Maguire,” but his acceptance speech ended up being a little over the top. While it wasn’t the longest speech of all time, he did make the most of air time while the show’s exit music was playing. And on top of his very loved-filled speech, Cuba actually did a backflip on stage that was only partially captured by cameras.

5. A Streaker Crashes the Stage

Back in 1974, David Niven was in the middle of introducing Elizabeth Taylor when he was surprised by gay rights activist Robert Opel streaking across the stage. David took it in stride, jokingly commenting on the moment by saying, “Isn’t it fascinating to think that probably the only laugh that man will ever get in his life is by stripping off and showing his shortcomings?”

Although Marlon Brando won many Oscars throughout his career, in 1973 he decided to make a statement by choosing to not accept his award for Best Actor. He refused to take the stage in protest of Hollywood’s often derogatory and racist portrayal of Native Americans in film. Instead, he sent Native American actress Sacheen Littlefeather to attend the ceremony in his place. On stage, she read a lengthy statement from Marlon, condemning the entertainment industry for their mockery of Native Americans.

Marlon’s decision led the Academy to create a rule stating no future winners could send a proxy to accept their awards.

In a surprising decision at the 1969 Oscars, Barbra Streisand and Katharine Hepburn were in a tie for their win for Best Actress. As Ingrid Bergman presented the award, an audible gasp echoed through the audience when she announced it was a tie. While Barbra took the stage to accept the award, Katherine was unable to attend and had Anthony Harvey accept the award on her behalf. Prior to that evening, a tie had only occurred twice and since then, it has only happened on three other occasions.

In a moment that made headlines, Angelina Jolie raised some eyebrows when she professed her love for her brother James Haven while on stage to accept Best Supporting Actress for “Girl, Interrupted.” In addition to saying, “I’m so in love with my brother right now,” the siblings were later photographed in a too-close-for-comfort lip-lock. She later denied that anything had been more than “brotherly” love and has no regrets about the moment.

“My parents really loved that moment, and that’s what will always matter,” Angelina told EW.

In 2014, John Travolta’s hilarious mistake at the Oscars helped create a long-lasting series of memes. While introducing Idina Menzel, he tripped over his words and ended up mispronouncing her name as Adele Dazeem. John later explained that there had been some chaos behind-the-scenes moments before he went on stage and he was a little bit confused.

“A page grabbed me out of my seat and said, ‘You’re on in a minute and 15 seconds.’ And I said, ‘Really? What happened to 15 minutes?’ They didn’t explain…They said, ‘You’re on…Oh by the way, we’ve changed Idina’s name to phonetic spelling! Okay go!’ I go out there and I get to her thing and I thought, ‘Hmm?’ In my mind, I’m going, ‘What is that name? I don’t know that name!’ And it was just phonetic but I didn’t rehearse it that way,” John said on “Jimmy Kimmel Live.”

10. Cher Wears a Showgirl Dress to the Ceremony

Cher shocked Oscar viewers when she showed up to the 1986 ceremony in a full showgirl attire. While Cher did look stunning, the over-the-top outfit was not in line with what the Academy expected people to wear to the event. Cher later admitted the outfit was an act of rebellion since she knew the Academy didn’t really like her anyway.

“I had the idea mostly because the Academy didn’t really like me. They hated the way I dressed, and I had young boyfriends, so they thought I wasn’t serious. So I came out and said, ‘As you can see, I got my handbook on how to dress like a serious actress,'” Cher told Vogue.

Award shows tend to go over the time that they’re typically allotted but back in 1959, the show ended up wrapping up 20 minutes early. Since the program was supposed to be on the air for the remaining time, host Jerry Lewis improvised the rest of the show. He filled the time by making jokes and encouraging the orchestra to continue to play. At one point, all the winners were on stage and paired off to dance with one another. Jerry even attempted to play the trumpet for a few minutes before NBC finally cut things off and started broadcasting a short film.