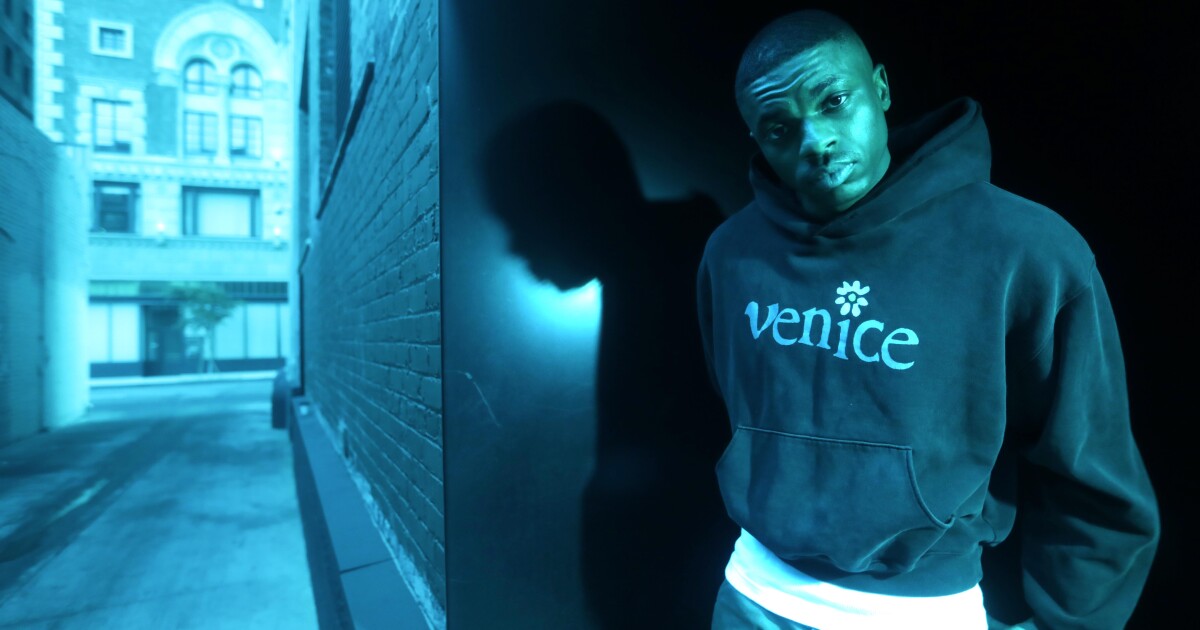 Vince Staples understands that listeners occasionally want more — and sometimes, something different — from him.

“No matter what level you reach, I don’t know an artist who puts something out and people are just like: ‘OK, we’re done. Thank you,” Staples, ever rational, says. His allure is a mixture of defiance in the face of expectations and distance kept from the public.

Since the mid-2010s, Staples has carved out a career by making vivid, hard-to-define hip-hop that’s perpetually been on the verge of finding a larger audience. He’s a nimble rapper, deftly maneuvering through verses depicting the street politics of his native Long Beach that exhibit his shrewd sense of humor (“Everybody tough, ‘til they gotta go and see the judge,” he quips on 2021’s “Are You With That?”) and forthrightness (“I ain’t never ran from nothin’ but the police,” he says on his 2015 single, “Norf Norf”). He’s worked with Kendrick Lamar, arguably the most lauded rapper of his generation, as well as pop star Billie Eilish, and has amassed over a million Twitter followers via wry observations such as: “Tour just jail wit a talent show.”

In conversation, Staples, 28, is notoriously resistant to explaining the meaning behind his work, holding firm to his belief that art is open for interpretation. “I’m not here to try and figure things out,” he says during a Zoom call between stops as a support act on friend and fellow iconoclast Tyler, the Creator’s tour. “I’m not here to try and dissect every lyric or sound.”

A little over a decade ago, Staples was a relative unknown in the orbit of Odd Future, the since-dissolved collective of brash misfits led by Tyler. Now, both have performances at the Coachella Valley Music and Arts Festival on their resume, with Staples making his second appearance on Sunday, April 17.

Staples’ catalog showcases his taste for the abstract. No two albums sound alike. On his debut, 2015’s “Summertime ‘06,” the gloom of No I.D.’s production matched the tone of Staples’ indirect references to innocence lost amid gang culture. 2017’s “Big Fish Theory,” perhaps his most ambitious record, assessed the dangers of flying too close to the sun on the wings of celebrity over the metallic clang of backdrops from dance music pillars such as Flume and Sophie. 2018’s “FM!” traversed the California hip-hop scene (with narration from legendary radio host Big Boy) to emphasize that summertime in the LBC isn’t as carefree as it may seem — and that the threat of violence is a year-round theme. Last year’s “Vince Staples,” produced by Kenny Beats, is his simplest and most direct album to date (“War time, I was in the back seat / I was on the frontlines,” he says on “Lil Fade”) yet stillproved to be polarizing.

For all of Staples’ willingness to experiment sonically, his music tends to focus on similar themes. It offers glimpses of the bleak realities he’s endured, the choices made by young people who were led astray, and their cascading effects. It neither glorifies nor moralizes. And it often addresses specific people, moments and locations, particularly Ramona Park, the North Long Beach neighborhood where he grew up.

His new album, “Ramona Park Broke My Heart,” finds Staples once again reflecting on the idea of home and the lasting impact of his experiences there, but with the perspective of someone who’s staring down 30 and has had time to consider his past. “I’m not 17, 18, 19 or however old I was when I started putting out music,” Staples says. “Life is different. I know more and I appreciate more, so I think it just comes with time. We have to have patience with ourselves.”

Ramona Park is the setting for much of Staples’ music, a location marked by intense gang violence and police surveillance, but where he and his friends had fun growing up in spite of that. Staples insists the new album’s title, and the spirit around it, is more exultant than it implies. “Sometimes, heartbreak is a good thing,” he says. “You can believe in something and then realize that you were wrong. You can believe this is the way to live life. Or you can believe that this is all that you’re worth or have. And then you can grow past that and realize that you are worth more than the hand that you were dealt.”

A variety of producers worked on the album including Mustard (who collaborated on the buoyant lead single, “Magic”) and the esteemed DJ Quik (who contributed scratches to the song named after him, which also samples his 1995 song, “Dollaz + Sense’’), connecting West Coast hip-hop’s past and present.

“Ramona Park Broke My Heart” is nearly twice the duration of his previous two albums, both of which clocked in at a brisk 22 minutes. Staples maintains that lyrically, he was even more succinct than usual this time around. “I actually had less to say,” he admits.

“Vince is a savant when it comes to writing,” says producer Michael Uzowuru, a longtime friend and collaborator who executive produced “Ramona Park Broke My Heart” with Beats. “His flows, his understanding of how to piece it all together. If this was Tetris, he could see 30 moves ahead.”

“When Sparks Fly,” a heart-rending, nuanced tale about a relationship with a gun that’s laid out like a doomed romance, demonstrates Staples’ flair for storytelling. “The Blues,” “Ramona Park‘s” pensive closer, offers a contemplative look behind the veil. “What’s success but guilt and stress? Ain’t too many n— had to live with that / Moving on from what you love, knowing you won’t ever get them feelings back,” Staples acknowledges over subtle guitar twangs and the calming sounds of ocean waves. The feelings he expresses on record have been described as survivor’s guilt, which he rejects. “I hear that a lot and I’ve never understood the concept of survivor’s remorse or survivor’s guilt,” Staples says. “It’s almost as if people don’t think we’re supposed to become anything. I’ll never feel guilty for making something out of myself.”

In recent years, Staples has taken a more active interest in endeavors beyond music. Last year, he wrote the graphic novel “Limbo Beach,” which concentrates on a familiar theme: Kids trying to reclaim their stolen youth. In 2019, he started a web series, “The Vince Staples Show,” an irreverent blend of comedy and music, only to have it derailed by the COVID-19 pandemic. It has since moved to Netflix, where it’s still in the early stages of production. “We’re working on it,” he says. “Hopefully we can make something great, then put it out when the time is right.”

The dissonance between the public perception of Staples and his reality is one of the defining themes of his career. His indifference about whether anyone gets him is another.

“From my point of view, people aren’t meant to be understood,” he says. “They’re meant to be accepted.”