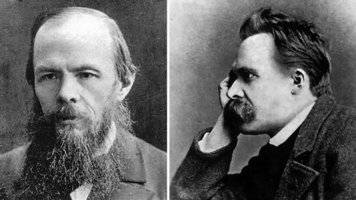 Literary historians frequently mention the German influence on Russian Literature of the 19th century. Indeed, a case can be made that early Russian romantic writers borrowed heavily from German writers such as Heine, ETA Hoffman, Novalis and Goethe. Little has been written about how Russian writers influenced German thinking and consciousness, however.

The Russian-German connection – from a political perspective – dates back to the great peasant rebellions of 1848-49. Richard Wagner – the extremely talented classical composer and German nationalist – actually fought on the barricades alongside the Russian anarchist Mikhail Bakunin during the Dresden uprising of 1849. The young Wagner had dreams of a new form of society and a new form of art. Russian radicals were of the same mind.

But of far greater consequence were the Russian writers, in particular, Tolstoy and Turgenev. The writings of these two Russians had a powerful influence on German intellectuals. The former in the area of spirituality and the latter in the sphere of politics. Turgenev’s novels “A Hunter’s Sketches” and “Fathers and Sons” inspired thousands of German intellectuals to dream of social change and political progress. Turgenev would even take up residence in Baden-Baden. To the Russian writer Goncharov, however, it was the German man who should serve as model for the “future man”. In his novel Oblomov, a lazy and passive Russian aristocrat (a superfluous man who likes nothing better than sleep) is juxtaposed with the lively, active and practical half- German character Stoltz. The idea being that Russians should become “men of action” and not waste their lives in a dream world.

More than anyone, though, it was the Russian writer Dostoevsky who would influence the philosopher Nietzsche who subsequently impacted German (and Western) thinking for more than a hundred years.

Calling Dostoevsky a “Master Psychologist”, Nietzsche read the Russian writer’s novels with great interest. He was not alone. In late 19th century Germany there was an outbreak of what was termed “the Raskolnikov effect” hereby disillusioned young men who identified with the hero committed a murder (usually a lover) and then attempted suicide.

Raskolnikov is the protagonist of the very philosophical novel “Crime and Punishment” by Dostoevsky. The hero is certain of his superiority and greatness and will prove it by murdering without pity. To his surprise – when Nietzsche was having difficulty publishing his works – he discovered that the Russian reading public was already familiar with him and loved his writings! (Incidentally the love of Nietzsche’s life was a German-Russian intellectual and feminist by the name of Lou Andreas Salome).

So affected was Nietzsche by the writings of Dostoevsky that his final act of sanity – or perhaps first act of insanity – came directly from a scene out of “Crime and Punishment”. While in Turin, Italy (1889) Nietzsche left his hotel and witnessed an old mare – barely able to move -being whipped by a driver. Just as Raskolnikov dreamt of protecting an old mare being beaten by throwing his arms around her, Nietzsche ran to the poor suffering animal and flung his arms around the mare while crying hysterically.

The German philosopher who railed against “pity” as a form of slave morality that should be overcome could not follow his own teaching at this point. It is a cruel trick of history that Nietzsche’s thoughts were adopted – and altered- by the Nazis who would – with Wagnerian bravado – invade Dostoevsky’s home country. Nietzsche – the man – would have been appalled by this savage act by German Raskolnikovs.

Anyone is free to republish, copy, and redistribute the text in this content (but not the images or videos) in any medium or format, with the right to remix, transform, and build upon it, even commercially, as long as they provide a backlink and credit to Russia Insider. It is not necessary to notify Russia Insider. Licensed Creative Commons