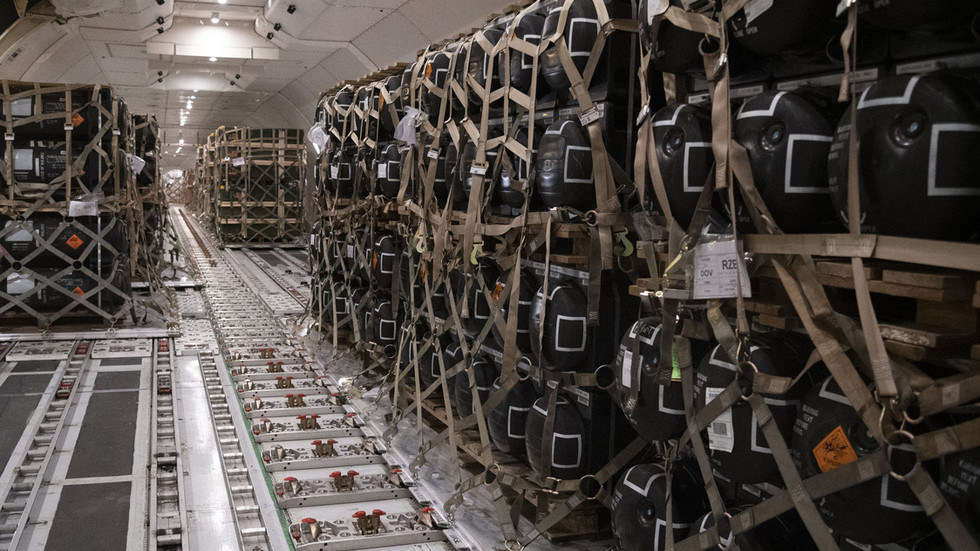 Rather than pursuing peace, the US and allies are doing all they can to turn the Ukraine conflict into a proxy war against Russia

By Timur Fomenko, a political analyst

Late Thursday, the Russian Ministry of Defence confirmed that the Russian Black Sea flagship the Moskva had sunk after a fire was triggered by an unconfirmed cause. There is no independent confirmation of what happened amidst the sea of Ukrainian propaganda, which was quick to claim Kiev’s forces had struck the vessel with a Neptune missile. Meanwhile, the United States had also confirmed a new $800 million package of military aid to Kiev, including new heavier weapons, while EU foreign policy chief Josep Borrell had recently affirmed a commitment for Kiev to win on the ‘battlefield’. As Moscow gears up for a new offensive to secure the Donbass region, it should be abundantly clear that the Western powers are not seeking to resolve the conflict or secure peace, but to escalate it and transform it into a fully-fledged proxy war against Russia.

Apart from its own invasions, bombings, coups, and regime change attempts imposed on countries around the world, one of America’s preferred methods of confronting its adversaries is to ‘wage war by proxy’ against them, that is, to support the war of a group or country against them without militarily engaging themselves. The history of the Cold War is littered with such examples, such as America’s backing of the Mujahideen against the Soviets in Afghanistan, its backing of Saddam Hussein against Iran in the Iran-Iraq War, or, on a more contemporary note, its failed attempt to overthrow Syrian President Bashar Assad via the local rebels. Proxy wars allow the US to minimize its own losses by having someone else die for them while also procuring geopolitical gain for themselves by undermining rival states, at the same time maximizing profits for the military-industrial complex by keeping the arms flowing.


After spending the first month of the Russia-Ukraine conflict calling for Russia to withdraw, it is now increasingly apparent that the US and its allies have changed course and are set on an ambition to drag out the conflict to impose as much damage on Russia as possible, in particular by intensifying weapon supplies, and providing training and intelligence for the Ukrainian Army. Although it was, of course, Moscow that made the choice to initiate the conflict in the first place, it has always been abundantly clear that the US viewed the situation in absolutist terms. Washington opposed any kind of prior compromise between Russia and Ukraine that may have helped avoid hostilities, which encouraged Zelensky’s overconfidence in refusing to negotiate. The same situation is panning out now. Washington does not want the war to end in a swift settlement whereby Ukraine makes concessions to Russia, because the ideal outcome is to ensure Moscow takes as much damage as possible, which means that a war of increasing escalation is in fact in the US’ interests.

There are several reasons for this. First of all, Russia’s tactical withdrawal from the north of Ukraine and a renewed focus on Donbass appears to give confidence to the West they can succeed in undermining Putin’s ‘core war goals’. Secondly, intensifying the conflict and escalation gives the West the political space to continue to impose more sanctions on Moscow and allows the US to impose more ‘unity’ on its European allies. Washington has also calculated that the broader context of this conflict will allow it to push harder for China’s isolation, force countries to take sides and expand military blocs. It has been reported recently that the US is seeking for Japan to join the AUKUS alliance and to expand the military containment of China. Recent comments by Janet Yellen also demanded Beijing oppose the Russian offensive in Ukraine or risk “losing standing” in the world. In other words, the more the US can prolong this, the more geopolitical outcomes it can get in its favour.


This escalation scenario for Russia, however, risks turning the Ukraine crisis into a new ‘great patriotic war’ – that is, a conflict in which the survival of the nation itself is at stake. Why so? The United States and its allies have made it no secret that they want the war to end in failure for Russia. Some of them would like nothing more than for a military failure to precipitate the downfall of President Putin and the government – even if the only straight-up regime change call was ostensibly a slip of the tongue by US President Joe Biden. This confirms the Kremlin’s long-held suspicions about the true intentions of the West and the goals behind the expansion of NATO.

In conclusion, this means we’re now going into very dangerous territory. The US and its allies could not be clearer that they never wanted peace or compromise and are escalating the situation in Ukraine as a bid to affirm their own geopolitical hegemony over the world, be it against Russia, India, or China. For Russia, this becomes an ever-growing struggle against the Western bid to dominate, coerce, and subjugate their country, with Ukraine as the sacrificial pawn.