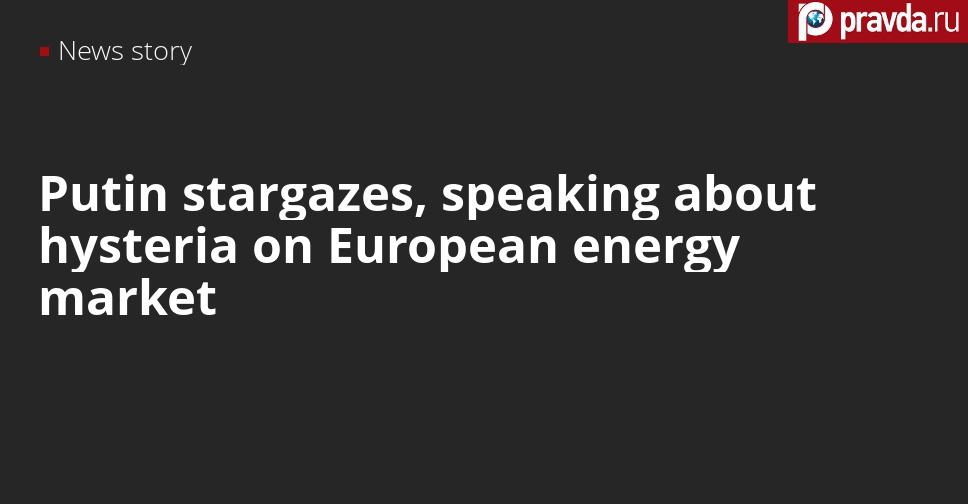 Russian President Vladimir Putin said that there was “hysteria and confusion” in the European energy market. According to him, unlike Europe, Russia will be able to switch to alternative energy smoothly.


You see what is happening in Europe: there is hysteria and confusion in the markets there. Why? Because no one takes it seriously. Some speculate on climate change problems, others underestimate something, someone else starts cutting investments in extractive industries,” Putin said.


“The transition should be smooth transition, smooth, and our country absolutely has every opportunity to avoid such mistakes,” Putin said at a meeting with the government.


According to Vladimir Putin, the maximum rate of economic growth should be ensured while achieving carbon neutrality at the same time.


“We set an ambitious task: to make greenhouse gas emissions even lower than in the European Union. On the way to this goal, we must solve yet another problem. By reducing the negative impact of the Russian economy on global climate, we must ensure the maximum rates of its growth,” the head of state said.


Putin also asked the government to step up work on projects for the electrification of gas and oil transportation infrastructure in Russia.


“We must competently and fully take advantage of the opportunities that open up current and future changes in the global economy, especially the projects that bring direct benefits to economy and at the same time provide a noticeable reduction in greenhouse gas emissions,” Putin said.


“In the oil industry, this is, for example, utilization of associated gas. This means that there is another issue coming up — the electrification of gas transportation and oil transportation infrastructure, investments in petro- and gas chemistry, … I ask the government to intensify this work,” Putin said.


Meanwhile, the demand for oil continues to recover, oil prices on the world market have skyrocketed. Brent oil was traded at $82 per barrel, Urals — above $80 per barrel. The rise in oil prices has had a positive effect on the Russian stock market, which is based on commodity companies.