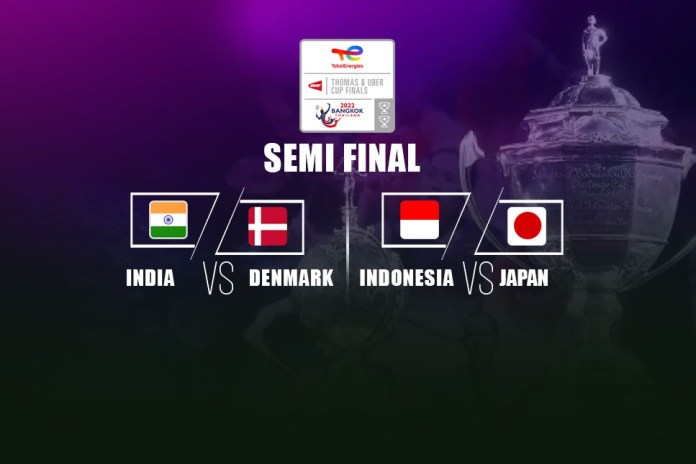 Thomas Uber Cup Semifinals LIVE – India vs Denmark LIVE (2-2): The Semifinal tie has gone into decider after Denmark fought back by winning the 2nd Doubles. All eyes are on HS Prannoy now. Prannoy takes on Remus Gemke in DECIDING match of the tie. Can India make it to the FINALS? Follow Thomas Uber Cup 2022 LIVE Updates with InsideSport.IN

Before this Satwiksairaj Reddy and Chirag Shetty won the crucial doubles tie against the Danish pair of Astrup & Christiansen in 3 sets.

While India clinched a 3-2 victory over five-time champions Malaysia, Denmark enters the contest after defeating Korea 3-2.

After historic performance against Malayasia in the quarterfinal, India takes on a strong Denmark side in the semifinals at the Thomas Cup on Friday. The Lakshya Sen led-side is up against a team that has World No.1 Viktor Axelsen in its ranks. While India clinched a 3-2 victory over five-time champions Malaysia, Denmark enters the contest after defeating Korea 3-2.

It’s a win for @PRANNOYHSPRI & #TeamIndia secured the 1️⃣st ever medal at #ThomasCup (New format) and have booked a spot in the semis after 4️⃣3️⃣ years beating 5️⃣ times champion #TeamMalaysia 💪#TUC2022#Bangkok2022#ThomasCup2022#IndiaontheRise#Badminton pic.twitter.com/30nJfAn22c

Lakshya Sen will be up against World No.1 Viktor Axelsen in the first match of the contest. Both the players met earlier this year at the German Open semifinals, where 20-year old Lakshya defeated the Danish in three sets with a 21-13, 12-21, 22-20 victory. They met again in the final of All England Championships where Axelsen avenged his German Open defeat with a 21-10, 21-15 victory.

While Lakshya enters the contest after facing two consecutive defeats in the tournament, Axelsen has won all his four games and enters the upcoming contest as the favourite.

Kidambi Srikanth will face World No.3 Anders Antonsen in aother blockbuster clash on the day. Both the players met earlier this year at the quarterfinals of Swiss Open and Srikanth won the game in three sets. Srikanth will look to put up another good show against the Danish. Srikanth is yet to be defeated in this tournament as he has won all his four games and is in terrific form at the moment. Andersen meanwhile, lost against China’s Li Shi Feng in three sets, which is his only defeat this year. Both the players are expected to give a tough fight in the upcoming contest.

HS Prannoy, is expected to face World No.13 Rasmus Gemke in the third men’s singles contest. Prannoy is in a very good form at the moment as he is yet to face a single defeat in the tournament. He was the one who clicnhed the last game for India to help his team defeat Malaysia and enter the semifinals. Meanwhile, Gemke has played two matches in the tournament and won both the games in straight sets.

Chirah Shetty and Satwiksairaj Rankireddy, who won the Indian Open title this year are likely to face Kim Astrup and Mathias Christiansen in the first men’s singles. The Indian pair has lost just one match against Chinese Tiapei, but have been in good form in the tournament. Astrup and Christiansen too faced a straight set defeat against China in the group stage. The Indian duo enters the contets as the favourite.

It remains to be seen whether India plays with MR Arjun or Dhruv Kapila or Krishnaprasad Garaga or Vishnuvardhan Goud Pinjala. However either of the pair willlikely meet Anders Rasmussen and Sogaard.

The match is scheduled to begin at 4.30 pm IST

Fans in India can watch the Thomas Uber Cup 2022 LIVE Broadcast on Sports18. The LIVE Streaming of the world’s biggest badminton team championship will be LIVE Streamed on Voot Select.