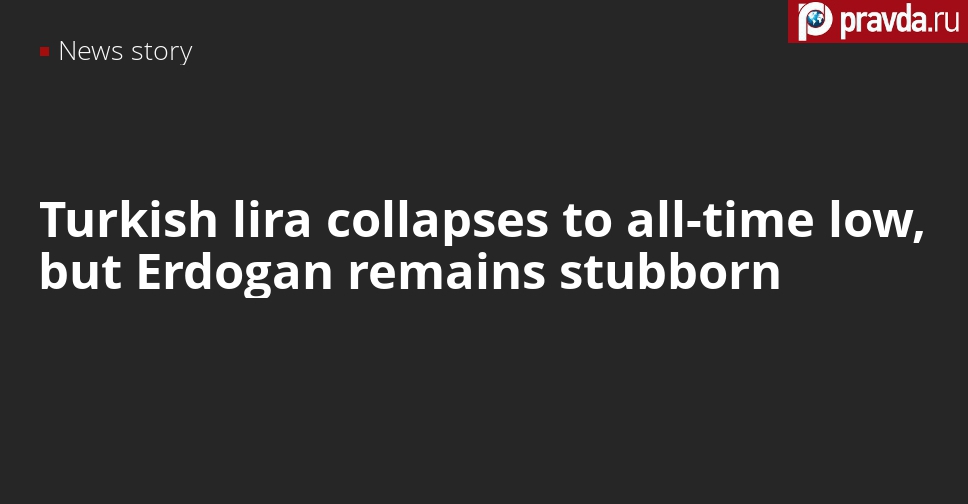 The Turkish lira exchange rate against the US dollar has collapsed to an all-time low on Friday, December 10. The Turkish currency is currently traded at 13.94 lira per one US dollar.

The value of the Turkish lira has been declining since early 2021 against the backdrop of the policies conducted by Turkish President Recep Tayyip Erdogan. In February, the dollar was worth 6.9 lira, and since then the Turkish currency has depreciated by almost 120 percent.

Despite the high inflation in the country that reached 21.3 percent in the first eleven months of 2021, Erdogan remains strongly opposed to the idea of ​​raising the key rate. The Turkish president thereby stands up against the generally accepted macroeconomic theory about the need to limit money circulation in order to combat price increases. A move to raise the key interest rate performs this function: the Central Bank gives more expensive loans to banks, and the latter, in turn, raise the rate for their clients, making the use of borrowed funds less profitable.


Turkey has not changed its key interest rate from March to August, keeping it on the level of 19 percent. The rate was subsequently reduced to 15 percent. The Central Bank of Turkey will hold its last meeting in 2021 on December 16.


During his speech in Izmir at the end of November, the Turkish president announced that the key rate would fall again. Over the past five years, Erdogan has replaced four heads of the Central Bank of Turkey. The current head of the regulator, Şahap Kavcıoğlu, took office in March 2021.