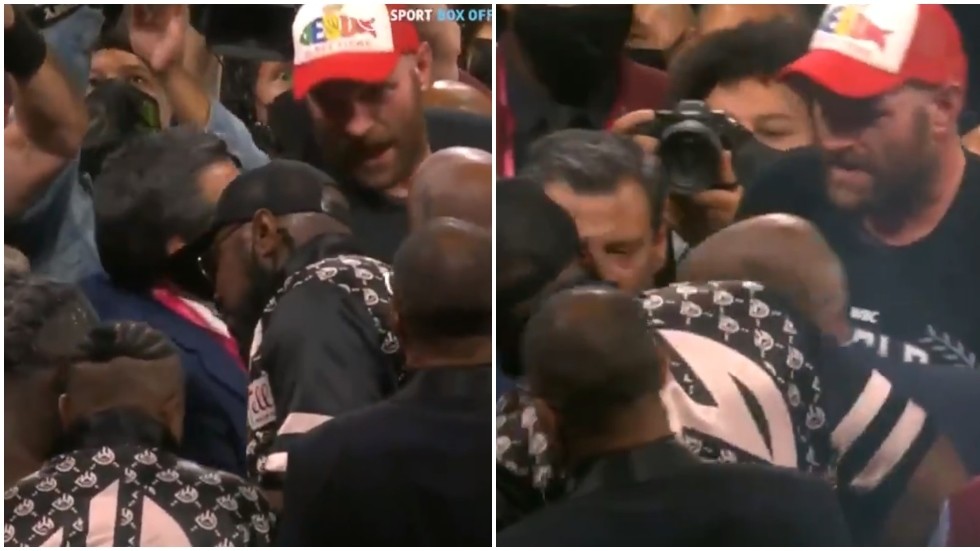 Tyson Fury said the defeated Deontay Wilder failed to show respect after the British boxer attended the American’s corner after knocking him out in round 11 of their heavyweight world title fight in Las Vegas.

In a third meeting between the pair, Fury and Wilder put on an instant classic as both took trips to the canvas at the T-Mobile Arena before the Gypsy King exerted his authority to finish his American rival with a brutal late onslaught.

Fury retained the WBC title he won from Wilder in their previous fight 20 months ago, and Saturday night in Vegas will be seen as capping one of the most beguiling rivalries of the recent heavyweight era.

The build-up to the fight had seen bitter words exchanged between both camps, with Wilder continuing to insist that Fury had cheated in their last fight by tampering with his gloves while the 6ft 9in Brit had vowed to send the Bronze Bomber into retirement by “butchering” him.

Also on rt.com
‘His pretty wife won’t recognize him’: Fury vows to ‘butcher’ Wilder as both men at career-high weights ahead of trilogy (VIDEO)

It was Fury who had his arms raised at the end of the night as Wilder sat on his stool, bruised, battered and despondent.

Despite the simmering bad blood between the pair, Fury appeared to extend an olive branch to the 35-year-old Alabama fighter approaching his corner and exchanging words.

However, the Brit claimed in his post-fight interview that his peace offerings had been dismissed by Wilder.

“I said ‘well done,’ and he said ‘I don’t want to show any sportsmanship or respect.’ I said ‘No problem.’ I was very surprised. Sore loser. An idiot,” Fury revealed to BT Sport.

“To be a top fighting man you have to show guts and respect, and he couldn’t do it tonight.”

Fury continued the theme at a post-fight press conference, dragging up Wilder’s repeated allegations that the undefeated lineal world heavyweight king had tampered with his gloves in their last fight.

“How can you say I’ve cheated when you know in your own heart and your whole team knows you got beat fair and square?” said the 33-year-old.

“It’s a sore loser in boxing. He’s not the first one and he won’t be the last one. But I’ve acted like a gentleman throughout my career and that’s all I can do as a man.”

Fury is the only man to beat Wilder in the American’s 45-fight professional career, and at the age of 35 the Bronze Bomber will now surely face questions over his possible retirement – something Fury had vowed to facilitate before Saturday night began.

Fury, meanwhile, will look towards a possible title unification fight with the winner of the Oleksandr Usyk versus Anthony Joshua rematch set to take place next spring, after the Ukrainian took Joshua’s titles in an upset in London last month.