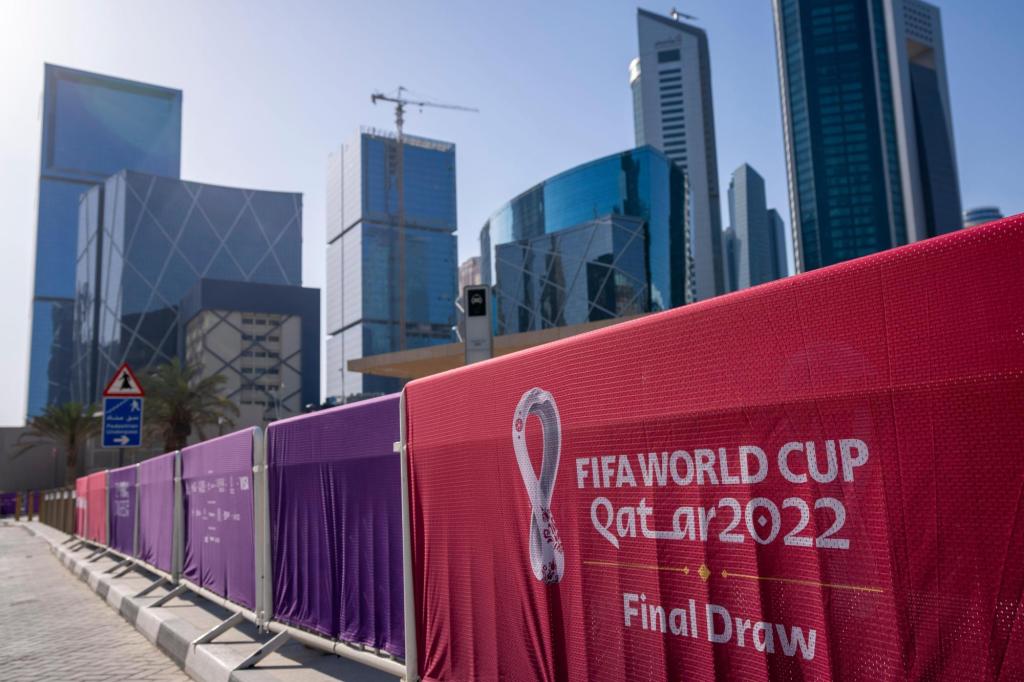 DOHA, Qatar (AP) — The most controversial World Cup ever will feature in Qatar the most politically charged matchups.

Just like in 1998, the United States will play Iran with diplomatic relations yet to be restored between the nations. Throw into the mix in Group B, England, whose government has endured tense relations with Tehran.

The group could yet be completed by Ukraine, whose ability to qualify for the World Cup has been postponed by being invaded by Russia. The Ukrainians will have to overcome Scotland and then Wales in the playoffs to make the tournament in November.

What is known is that Qatar will open its first World Cup against Ecuador on Nov. 18 after qualifying for the first time as host.

The draw in Doha on Friday delivered a thrilling matchup in Group E between Spain and Germany. Group C could see a meeting of the most recent FIFA Best winners with Lionel Messi’s Argentina drawn to play Robert Lewandowski’s Poland.

The world champion will be crowned in December for the first time due to the final being moved from its usual July slot to avoid Qatar’s fierce summer heat.

Qatar has spent 12 years, since winning the World Cup bid, fighting to protect the hosting rights amid corruption investigations and regional disharmony.

The implausibility of Qatar staging such a mammoth event within the congested confines of Doha was clear in the desert imagery that flashed on the screens around the draw venue. Images of skyscrapers growing from the sand served as a reminder of the vast projects required to develop this gas-rich nation in recent decades.

“The world can see Qatar as promised,” the Emir of Qatar, Sheikh Tamim bin Hamad Al Thani, told the audience.

There was an oblique reference before the draw by FIFA President Gianni Infantino to the war on Ukraine launched in February by 2018 host Russia.

“Our world is divided, our world is aggressive,” Infantino said, “and we need occasions to bring people together.”

There was a plea for peace.

The day began with a protest outside FIFA headquarters in Zurich. German artist Volker-Johannes Trieb used balls filled with sand to protest against the suffering of migrant workers in Qatar who have worked on the infrastructure related to the World Cup.

Here is where the teams landed for the Nov. 21-Dec. 18 tournament:

Host Qatar will make its World Cup debut against Ecuador on Nov. 21.

England will open against Iran in a first ever World Cup game between the countries. England and the U.S. will play each other in their second game. The drew 1-1 in their 2010 group when both advanced.

England’s final game could be a derby against either of its neighbors, Wales or Scotland, or Ukraine — those three teams are in a playoff bracket in June.

Group B teams should also start play on Nov. 21. That gives those teams fewer days to prepare for the World Cup but builds in more rest days if they go deep into the tournament.

Lionel Messi and Robert Lewandowski — the holders of the Ballon d’Or and FIFA Best player in the world awards, respectively — are on track to meet when Argentina plays Poland in the last round of group games.

Argentina opens against Saudi Arabia, and Poland starts against Mexico.

Defending champion France and Denmark were in the same group four years ago and both advanced to the knockout stage. In 2018, they also faced Peru and Australia in their group so a three-team reunion is also possible depending on the outcome of an intercontinental playoff bracket in June.

2010 champion Spain will face 2014 winner Germany in a tough group for Japan.

Costa Rica was a quarterfinalist in 2014, going deeper then than Spain, but must first get past New Zealand in a playoff in June.

Belgium was a semifinalist four years ago and Croatia was the beaten finalist. Canada is an intriguing and difficult option from the lowest-ranked teams after topping its qualifying group ahead of Mexico and the U.S.

Morocco gets a group with two tough Europeans for back-to-back tournaments. Last time, it was Spain and Portugal.

Brazil, Switzerland and Serbia are quickly reunited after all were in the same group in 2018. Brazil will open against Serbia, which it beat 2-0 four years ago.

Brazil should be among the last teams to start play on Nov. 24 — more time for the squad to prepare but a more congested 25-day program if it is to win a record sixth title.

Cristiano Ronaldo is on track to open his fifth straight World Cup finals by facing Ghana.

The group reunites Luis Suarez and Uruguay with Ghana for the first time since their infamous quarterfinals game at the 2010 World Cup. Suarez was sent off for punching away an almost certain winning goal for Ghana deep in extra time. The penalty was missed and Uruguay went on to win the shootout.