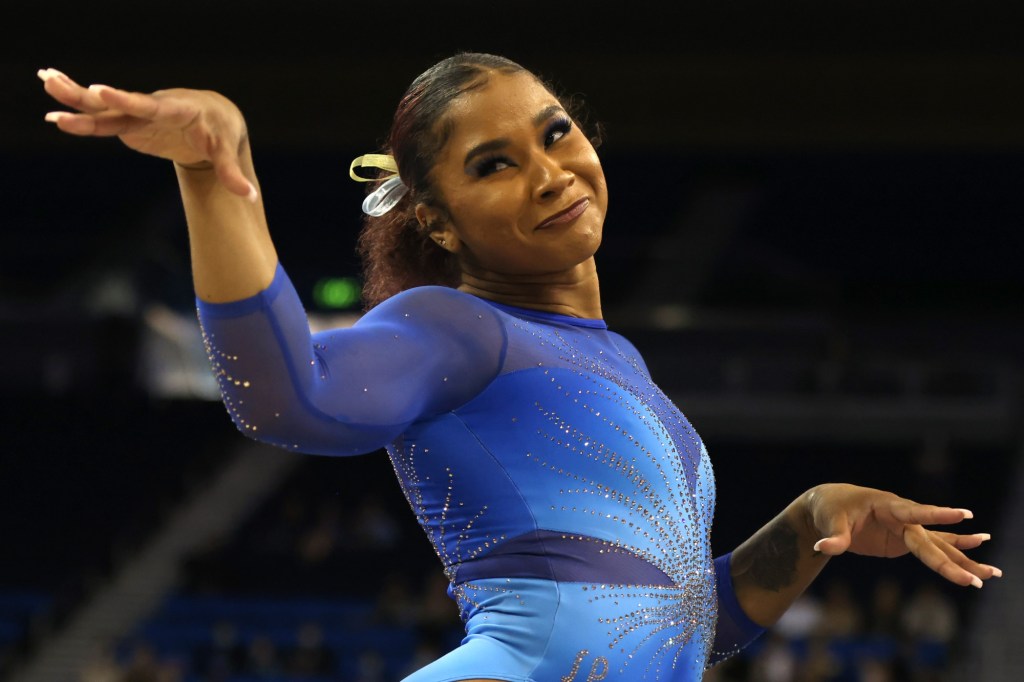 RALEIGH, N.C. — UCLA placed first in the second session of its NCAA Regional on Thursday, recording a season-high away score of 197.800 to beat second-place Michigan by four-tenths of a point.

In addition to UCLA and Michigan, Missouri and Iowa also advanced to the regional final, knocking out No. 6 LSU with the top scores from the first session. The four teams will compete for two spots in the NCAA Championships, which are scheduled for April 14-16 in Fort Worth, Texas.

Bruins senior Norah Flatley won the all-around with a score of 39.575. Freshman Jordan Chiles tied for first on uneven bars with a 9.950 and tied with sophomore Chae Campbell for first on floor exercise, also scoring 9.950.

The Bruins finished the regular season with three consecutive dual meet wins at home, but they finished fourth at the Pac-12 Championships. That neutral site event was still UCLA’s best showing outside of Westwood this season, but the Bruins bettered themselves on Thursday thousands of miles from Pauley Pavilion.

The Bruins led from start to finish, grabbing the first rotation lead after scoring 49.400 on vault. A season-high-tying 49.475 on uneven bars kept the momentum going, and UCLA maintained the lead after scoring 49.300 on the balance beam and counteracted Michigan’s final rotation score of 49.550 on beam with a dazzling 49.625 on floor exercise.

Chiles stuck a big Kazamatsu full and scored a career-high 9.925, and Campbell closed with a huge stuck Yurchenko full that earned her the same score.

UCLA tied its season-high on uneven bars (49.475) with a rotation filled with stuck landings, as four Bruins counted scores of 9.9 or higher. After Campbell’s leadoff 9.800, Frida Esparza and Ana Padurariu hit back-to-back 9.900s. Chiles performed the most difficult routine of the competition, with four release moves, and stuck her full-twisting double layout dismount for her 9.950. Flatley closed the rotation with a stuck double layout of her own and scored 9.925.

After Padurariu led off on the beam with a 9.875, the Bruins had their first bout of adversity after Chiles fell on her side somi, but her teammates picked her up, with Flatley following with a 9.900, Campbell a 9.850, and Samantha Sakti a 9.900. In the anchor spot, Emma Malabuyo had a big break in her routine after her front aerial but managed to stay on the beam to avoid a fall and then stuck her dismount to score a 9.775 to keep the Bruins ahead of Michigan, 148.175-147.950.

The lead increased as the Bruins wrapped up on their best event, with all five of their scores going for 9.900 or better to secure their first-place finish. Flatley started with a 9.900, then Brooklyn Moors recorded a career-best 9.925. Malabuyo scored 9.900, and Pauline Tratz scored 9.750 after just going out of bounds on her final tumbling pass. Chiles earned a 10 from one judge on her way to her final score of 9.950, and Campbell stuck her opening and final tumbling passes cold and also earned a 10 from one judge to earn her 9.950 score.

This is the hardest uneven bars routine in the NCAA. 😎 @ChilesJordan https://t.co/zZ5ooH1KLa