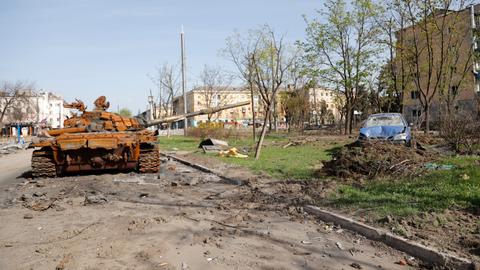 Ukraine’s General Staff says the country’s forces have made some gains on the border of the southern regions of Kherson and Mykolaiv and repelled multiple Russian attacks in the east.

In its daily morning update, the General Staff said that the Russians “lost control over several settlements on the border of Mykolayiv and Kherson regions.” Ukrainian forces also repelled 11 attacks in the Donetsk and Luhansk regions, the update said.

At the same time, fighting over the Azovstal plant in Mariupol continued, the General Staff said. “With the support of aircraft, the enemy resumed the offensive in order to take control of the plant,” the update said, adding that the Russian troops were “trying to destroy Ukrainians units” at this last remaining pocket of Ukrainian resistance in the ravaged port city.

Five civilians have been killed by shelling from Russian forces in Ukraine’s Luhansk region in the past 24 hours, governor Serhiy Gaidai has said.

Gaidai said the shelling focused on Sievierodonetsk and Popasna, Hirske and Lysychansk.

A Russian-announced ceasefire is due to begin at the besieged steel plant in the devastated Ukrainian city of Mariupol, to allow civilians to flee even as its defenders vowed to fight to the end.

“The Russian armed forces will open a humanitarian corridor from 0500 to 1500 GMT (08:00 to 18:00 Moscow time) on May 5, 6 and 7 from the site of the Azovstal metallurgical plant to evacuate civilians,” the ministry said.

Japan will face “difficulty” to immediately follow a move to cut off Russian oil imports over the Ukraine conflict, its minister of economy, trade, and industry Koichi Hagiuda has said.

Hagiuda made the remark during a visit to Washington, after the European Union’s executive proposed the toughest package of sanctions yet against Moscow, including the embargo on crude oil.

“Given Japan has its limit on resources, we would face some difficulty to keep in step immediately” with other countries, Hagiuda told reporters.

‘They were constantly shelling us’

Ukrainians who were trapped in the Azovstal steel plant in Mariupol recount their horror stories pic.twitter.com/zivE9fwtMU