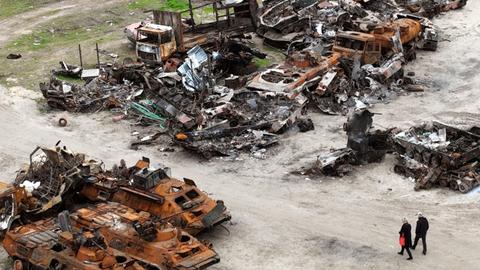 Fierce fighting between Russian and Ukrainian troops continues along the long front in the Donbass as Ukrainian fighters under siege in a Mariupol plant plead for help in the conflict that enters its 80th day.

The conflict in Ukraine could reach a “breaking point” by August and end in defeat for Russia before the end of the year, Kiev’s head of military intelligence tells the UK’s Sky News.

Major General Kyrylo Budanov told the news network that he was “optimistic” about the current trajectory of the conflict. “The breaking point will be in the second part of August,” he said. “Most of the active combat actions will have finished by the end of this year.

“As a result, we will renew Ukrainian power in all our territories that we have lost including Donbass and the Crimea,” he said. Budanov said that Ukraine knows “everything about our enemy. We know about their plans almost as they’re being made.”

G7 ‘will never recognise’ borders changed by force by Russia

The Group of Seven industrialised nations has said they will never recognise the borders Russia is trying to shift in its war against Ukraine.

“We will never recognise borders Russia has attempted to change by military aggression, and will uphold our engagement in the support of the sovereignty and territorial integrity of Ukraine, including Crimea, and all states,” the G7 foreign ministers said in a statement after three days of talks in northern Germany.

The UN has described the conflict in Ukraine as the worst refugee crisis in Europe since WWII. Equally alarming are reports that Moscow is actively hampering civilian evacuations… and sending some people to Russia against their will pic.twitter.com/8ieNoBvWYP

Russia has suspended electricity supplies to Finland overnight after its energy firm RAO Nordic threatened to cut off supplies over payment arrears, an official for Finland’s grid operator says.

The supplies “are zero since midnight,” Timo Kaukonen said.

RAO Nordic had said it would suspend supplies, citing problems with payments, as Helsinki prepares to announce its application for NATO membership in the wake of Moscow’s offensive in Ukraine.

Some 27,200 Russian soldiers have so far been killed during the war in Ukraine, the Ukrainian military claims.

At least 300 more Russian troops were killed over the past day, according to the Ukrainian General Staff.

Ukraine appears to “have won the Battle of Kharkiv” after its forces prevented Russian troops from encircling, let alone seizing the city, the US-based Institute for the Study of War says.

“The Russian military has likely decided to withdraw fully from its positions around Kharkiv City in the face of Ukrainian counteroffensives and the limited availability of reinforcements”, according to the latest assessment from the US-based Institute for the Study of War.

“Reports from Western officials indicate that Moscow is focused on conducting an orderly withdrawal and prioritising getting Russians back home before allowing proxy forces to enter Russia rather than trying to hold its positions near the city”, it said.

Moscow has no hostile intentions towards Finland and Sweden and does not see “real” reasons for those two countries to be joining the NATO alliance, Grushko added.

Pro-Kremlin authorities in Ukraine’s Kherson to ask to be included in Russia: UK

The Russian-imposed military-civilian administration in Ukraine’s Kherson region will ask Russia to include it in the Russian federation, British defence ministry says.

“A central part of Russia’s original invasion plan was highly likely to use rigged referendums to place the majority of Ukraine’s regions under long-term pro-Russian authority”, the ministry said.

If Russia carries out an accession referendum in Kherson, it will almost certainly manipulate the results to show a clear majority in favour of leaving Ukraine, Britain said in a regular Twitter bulletin.

Find out more about the UK government’s response: https://t.co/tAa8K8A12w

Senior Russian lawmaker Anna Kuznetsova has visited the Russian-occupied region of Kherson in Ukraine to discuss social and healthcare needs of the local population, the state RIA news agency reported.

Kuznetsova, deputy head of Russia’s Duma or lower house of parliament, discussed the supply of foodstuffs as well as medical and other products needed for children, RIA reported. “We are here ready to provide all kinds of assistance,” Kuznetsova, the wife of an Orthodox priest and mother of seven was quoted saying.

Kherson is the first region set to be annexed after Moscow said in April it had gained full control of the region, which has seen sporadic anti-Russian protests.

Over 700,000 refugees from Ukraine registered in Germany -Welt

Since the start of the Russian offensive on February 24 until May 11, 727,205 people have registered in Germany’s Central Register of Foreigners (AZR), of which 93 percent hold Ukrainian citizenship, Welt reported.

A significant number may have travelled on to other European Union countries or returned to Ukraine, it said. Around 40 percent of Ukrainian refugees were minors and women make 81 percent of the adult refugees registered, Welt added.

Leaders of the United States and the 10-country Association of Southeast Asian Nations (ASEAN) committed at a summit in Washington on Friday to raise their relationship to a “comprehensive strategic partnership” in November this year.

In a joint “vision statement” after a two-day summit, the leaders also said in reference to Ukraine that they reaffirm “respect for sovereignty, political independence, and territorial integrity.”

Russian forces suffered heavy losses in a Ukrainian attack that destroyed a pontoon bridge they were using to try to cross a river in the east, Ukrainian and British officials said in another sign of Moscow’s struggle to salvage an attack gone awry.

Ukraine’s airborne command released photos and video of what it said was a damaged Russian pontoon bridge over the Siversky Donets River in Bilohorivka and several destroyed or damaged Russian military vehicles nearby — the Ukrainians said they destroyed at least 73 tanks and other military equipment during the two-day battle earlier this week. The command said its troops “drowned the Russian occupiers.”

“Conducting river crossings in a contested environment is a highly risky maneuver and speaks to the pressure the Russian commanders are under to make progress in their operations in eastern Ukraine,” the British Defence Ministry said in its daily intelligence update.

In its official statement at the time, the association said the move was due to a “new regulation enforced by the Russian government which is heavily restricting media freedom.”

“The Board of EANA considers that TASS finds itself in violation of the purpose of EANA … not being able to provide unbiased news, which stand at the core of EANA’s mission statement.”