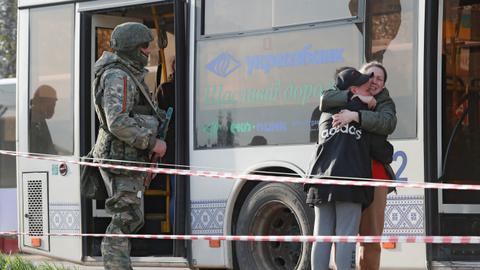 US pledges continued support for Ukraine as fighting – now in its 68th day – stretches along a broad front in southern and eastern Ukraine’s Donbass region.

The plant has endured a Russian blockade since Moscow’s assault on February 24, with stories of the harsh conditions in besieged Mariupol horrifying the world as an offensive which has seen thousands killed and millions displaced entered its third month.

The head of the Donetsk Regional Military Administration has said the evacuation would begin at 7:00 am local time (0400 GMT). One Russian news report put the number of civilians still in the steel plant at more than 500.

Ukraine’s president has described his hours-long weekend meeting with US House Speaker Nancy Pelosi in Kiev as a “powerful” signal of support in a difficult time.

Zelenskyy said his meeting with Pelosi included discussions of defence supplies to Ukraine, financial support and sanctions against Russia.

Zelenskyy said Ukrainians “are grateful to all partners who send such important and powerful signals of support by visiting our capital at such a difficult time.”

A Ukrainian military officer has said that Russian forces have resumed their shelling of a steel plant in the port city Mariupol immediately after the partial evacuation of civilians.

Shlega said that at least one more round of evacuations is needed to clear civilians from the plant. He said dozens of small children remain in bunkers below the industrial facilities.

Two explosions have taken place in the early hours on Monday in Belgorod, the southern Russian region bordering Ukraine, Vyacheslav Gladkov, the region’s governor wrote in a social media post.

“There were no casualties or damage,” Gladkov wrote.

Sviastoslav Palamar, deputy commander of the Azov Regiment, which is helping defend the last section of Mariupol not occupied by the Russians, said he was glad evacuations had begun.

Palamar hoped the evacuations from the Azovstal steel mill continue until everyone in the plant, civilians and soldiers, had gotten out. It’s been difficult even to reach some of the wounded inside the plant, he told The Associated Press in an interview from Mariupol.

“There’s rubble. We have no special equipment. It’s hard for soldiers to pick up slabs weighing tons only with their arms,” he said. The Azovstal plant is strewn with mines, rockets, artillery shells and unexploded cluster ordnance, he said.