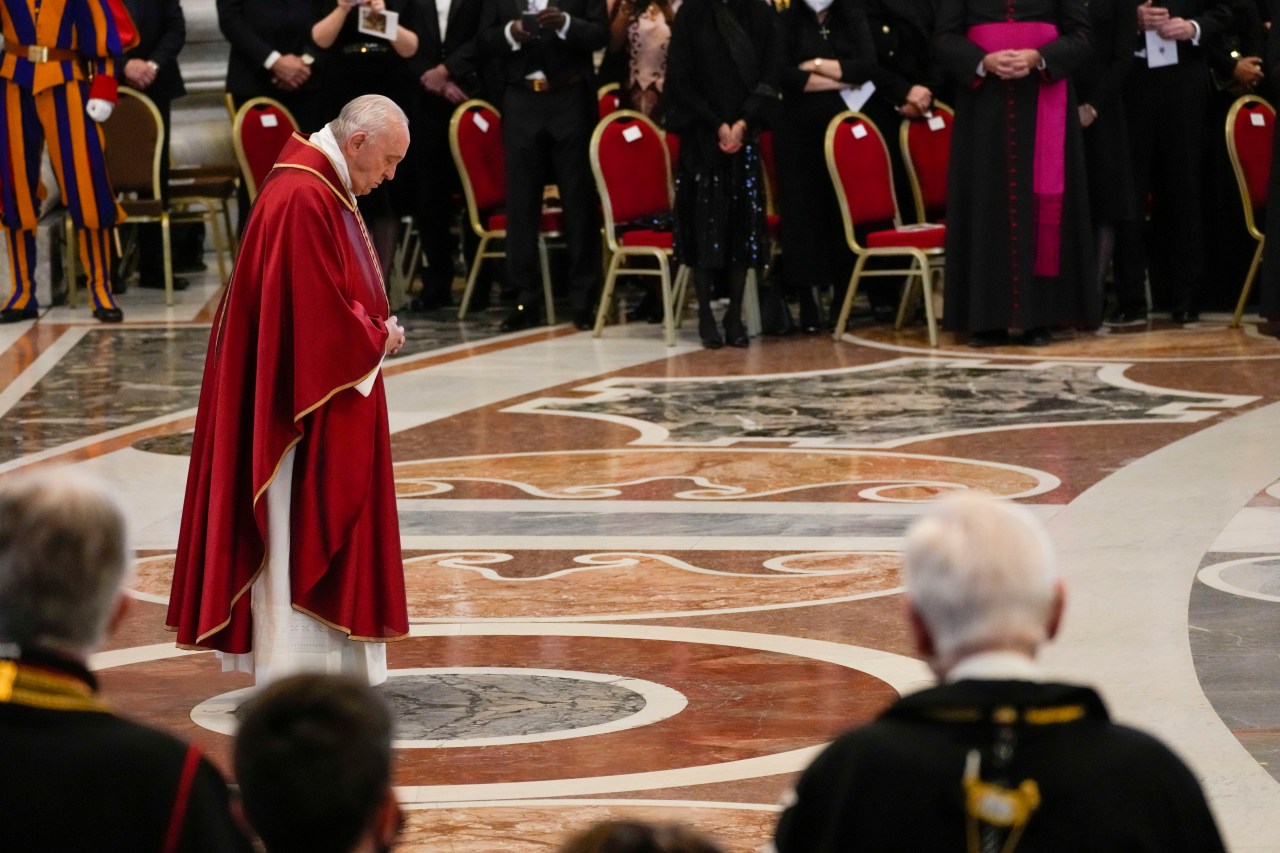 ROME (AP) — The war in Ukraine loomed over the traditional Good Friday Colosseum procession in Rome, after the Vatican’s choice of a Russian woman to be among the cross-bearers angered Ukrainians.

For the first time since before the pandemic, the solemn torchlit procession at the ancient arena in Rome was to resume on Friday night. Thousands of pilgrims and tourists flocked to the site hours earlier, in hope of catching a glimpse of Pope Francis, who presides over the service from an elevated point near the Roman Forum.

Earlier this week, Ukraine’s ambassador to the Holy See and the archbishop of Kyiv denounced the Vatican’s plan to have a Ukrainian woman and a Russian woman carry the cross together during the procession. They objected to projecting what they saw as the idea of reconciliation while Ukraine is ravaged by war unleashed by Russia.

The Vatican didn’t respond to the protests or announce any program changes.

While Francis has denounced the Feb. 24 invasion and attacks on Ukraine as a “sacrilege,” he has refrained from naming Russia as the aggressor, although his references to Russian Vladimir Putin have been clear. The pope is pressing for negotiations to cease the fighting and bring peace, and has offered to go to Ukraine if his presence could further the cause of peace.

But other faithful in the world applauded the decision to pair the two women, who work together at a Rome hospital and are friends, to carry the cross during part of the procession, which recalls Jesus’ suffering as he was being brought to his crucifixion and death.

In Paris, hundreds of Catholics gathered for Good Friday prayers on the forecourt of Notre Dame cathedral, and followed its rector on a procession around the island on the Seine River that houses the medieval landmark.

“Well, you know today the pope has a woman from Ukraine and a woman from Russia holding the cross together at one of the Stations of the Cross,” Jennifer Kilgore-Caradec told The AP at Notre Dame. She called that a “very moving and meaningful symbol.” She added: “I think that real people in the real world are concerned about peace. We want peace, we don’t want war,” which brings suffering and pain. That is “not the message of the Christ on the cross.”

The faithful were not allowed inside the Paris cathedral, since it is still under reconstruction after a 2019 blaze collapsed its spire and destroyed its roof. French President Emmanuel Macron was visiting the cathedral Friday to mark the third anniversary of the fire.

In St. Peter’s Basilica, hours ahead of the Colosseum event, Pope Francis, wearing red vestments to symbolize the blood of Jesus, limped up the central aisle to take his place for an early evening prayer service. Francis, 85, has been suffering from a knee ligament problem.

Usually at the Good Friday basilica service at the Vatican, the pontiff would prostrate himself in prayer. But this time Francis, hobbled by pain for weeks, didn’t do so.

Francis dispatched his official almsgiver, Polish Cardinal Konrad Krajewski, to Kyiv to lead a Good Friday procession in the capital city of war-ravaged Ukraine. Italian Rai state TV said Krajewski on Friday visited two of Ukraine’s hardest-hit locations, Bucha and Borodyanka, both in ruins. At one point, Krajewski prayed over some of the bodies and leaned over to touch one, partially covered, body.

Throughout his papacy, Francis has repeatedly denounced armaments accumulated by nations as unjustified. In an interview broadcast on Italian state TV on Friday, the pope elaborated on his view.

Good Friday is one of the main days for Christians during Holy Week, which culminates in Easter, on Sunday.

In Jerusalem, where tens of thousands of faithful traditionally converge on the Israeli city’s Old City to visit sacred sites during Holy Week, Palestinians on Friday clashed with Israeli police at the Al-Aqsa mosque. The site is sacred to Jews and Muslims. This year, Ramadan coincides with Passover, as well as Holy Week.

Medics in Jerusalem said that more than 150 Palestinians were injured, in the most serious violence at the site in nearly a year.