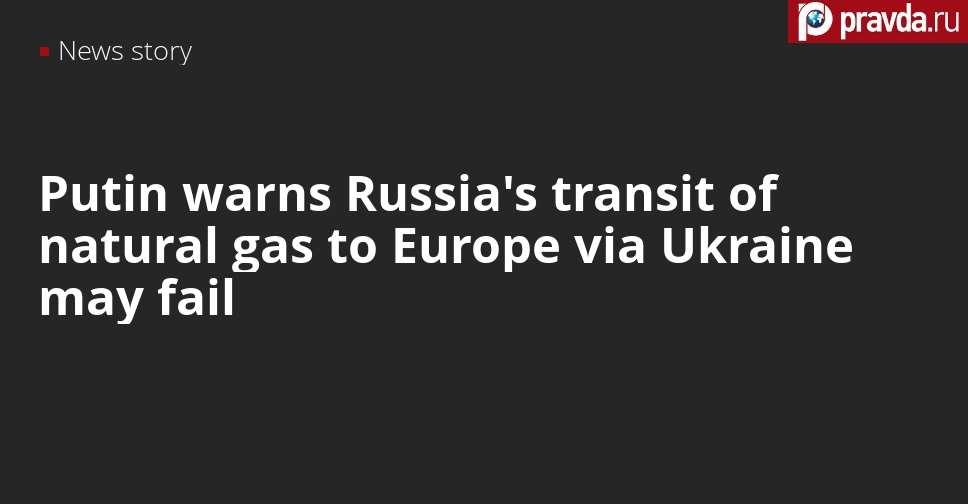 Russian President Vladimir Putin warned that the transit of natural gas to Europe through the territory of Ukraine may eventually stop. In his opinion, the Ukrainian gas pipeline system may simply burst if the transit increases.


“Some irresponsible politicians in Ukraine call for the nationalisation of gas, and as a result, they started draining out gas there,” Putin said.


According to Putin, Russia has increased supplies through the gas transportation system of Ukraine by over ten percent this year.


“One can’t increase it there anymore. Everyone is telling us to increase gas supplies through Ukraine, but it is dangerous to increase. The GTS has not been repaired there for decades, and if the pressure goes up, the system will burst, and Europe will lose this route completely,” President Putin said.


At the same time, Putin pointed out that even during most difficult periods of the Cold War, Russia fulfilled its contractual obligations and supplied natural gas to Europe.


“Even during most difficult periods of the Cold War, Russia, on an ongoing basis, was fully fulfilling its contractual obligations to supply gas to Europe,” he recalled.


Earlier, Putin named the reason for the rise in gas prices in Europe. According to him, prices on natural gas in Europe increased due to the shortage of electricity, but not vice versa. Putin also promised that Russia would reach the level of record-breaking gas supplies to the world market by the end of the year.

Putin’s official spokesman Dmitry Peskov, in turn, said that Russia had increased gas supplies to Europe under existing contracts to the maximum and would not be able to increase fuel exports further.