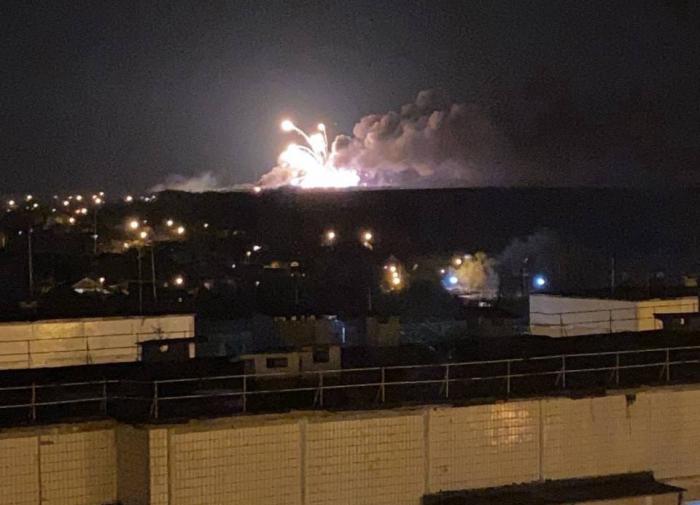 The fire at the oil depot in the city of Belgorod, Russia, occurred as a result of an air strike, which was conducted by two helicopters of Ukrainian Air Force, Belgorod region Governor Vyacheslav Gladkov wrote on his Telegram channel.

The Ukrainian helicopters, the governor said, entered Russia’s airspace while flying at a low altitude.

The head of the region assured that the population was out of danger. The region has all resources to liquidate the fire, he added.

Gladkov reported the fire at Belgorod oil depot earlier on April 1. It was said that two people were hurt in the incident. Those people residing on Pochtovaya, Makarenko and Konstantin Zaslonov streets were evacuated to safety.

Eight fuel tanks with a capacity of 2,000 cubic meters each are on fire in Belgorod as a result of the attack, RIA Novosti reports.

The video shows two combat helicopters firing what appears to be free-flight rockets. Having conducted the attack, the helicopters fly away at high speed and low altitude.

The Constanta print shop was fired upon in the village of Severny near Belgorod, its director Konstantin Lakhnov told Belgorod Media.

According to him, the attack occurred at around 5:30 in the morning. The heating of the print shop was damaged, there is no electricity.

Officers of the Investigative Committee are working on the scene, the information is to be specified, Belgorod Media reports.

Security services in the Kursk region of Russia, Belgorod region’s neighbouring territory, were put on high alert against the background of the attacks, Kursk region Governor Roman Starovoit said.