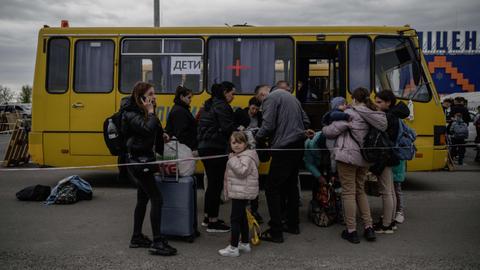 Russian forces are now largely in control of the key eastern Ukrainian city of Sievierodonetsk amid fierce fighting, now in its 106th day, as UN warns that the global impact of the Russian offensive is worsening.

Nearly five million Ukrainians have been registered as refugees across Europe since Russia launched its offensive less than four months ago. “The Ukraine war has caused one of the largest human displacement crises in the world,” said UNHCR, the UN refugee agency.

An update of the agency’s data portal on the Ukraine situation showed that a total of 4,816,923 Ukrainians had been registered as refugees across 44 European countries since February 24.

Far more will have actually left, with data showing more than 7.3 million border crossings out of Ukraine by June 7. Another 2.3 million crossings had been registered back into the country. The UN says women and children account for 90 percent of those who have fled abroad.

Ukrainian President Volodymyr Zelenskyy has said Russia’s offensive against his country posed a huge threat of pollution to water basins, including the Sea of Azov.

In an address to a ministerial meeting of the Organisation for Economic Co-operation and Development (OECD), he also underlined the need for green energy to replace Russian natural gas supplies following Russia’s military campaign that started on February 24.

Ukrainian forces still hold the industrial zone and adjacent areas in the city of Sievierodonetsk, and the situation is “difficult but manageable”, Mayor Oleksandr Stryuk has said.

He said defence lines were holding despite intense Russian artillery fire but that it was now impossible to evacuate people from Sievierodonetsk. He said about 10,000 civilians remained in the city, which is now the main focus of Russia’s offensive in Ukraine.

Western long-range artillery would enable Ukraine to beat back Russian forces and capture Sievierodonetsk within days, a regional Ukrainian official has said.

“As soon as we have long-range artillery to be able to conduct duels with Russian artillery, our special forces can clean up the city in two to three days,” Luhansk regional governor Sergiy Gaiday said in an interview distributed on his official social media channels.

Ukrainian President Volodymyr Zelenskyy has described the battle as “one of the most difficult” since the start of the conflict. Gaiday said on Thursday that Ukrainian forces in the city remained “highly motivated” and “everyone is holding their positions”.

Global efforts to avoid a food crisis start at Ukraine’s Black Sea ports and Kiev needs assurances that they will not be attacked to resume grain shipments, Italian Prime Minister Mario Draghi has said.

Grain shipments from Ukraine, a major exporter, have fallen sharply since Russia’s operation, sparking fears of food shortages in the most vulnerable countries.

“We need to unblock the millions of tonnes of cereals that are stuck there because of the conflict. The United Nations’ and Türkiye’s mediation efforts are significant steps,” Draghi said in a speech at an OECD ministerial meeting in Paris.

Zelenskyy: Millions could starve because Russia is blockading ports

Millions of people could starve because of Russia’s blockade of Ukraine’s Black Sea ports, President Volodymyr Zelenskyy has said. Warning that the world was on the brink of a “terrible food crisis”, he said in a televised statement that Ukraine was unable to export wheat, corn, oil and other products.

He has earlier said Moscow’s aggression was responsible for a global grain crisis, dismissing Russian claims that Western sanctions on Moscow had sent prices soaring.

Russia also blames Ukraine for the situation over grain exports and cites sea mines planted by Kiev’s forces. On Wednesday, Russian Foreign Minister Sergey Lavrov said Moscow was ready to ensure the safe passage of vessels from Ukraine, amid concerns over grain stuck in Ukrainian ports.

Russian forces have increased their efforts to advance to the south of the town of Izium in eastern Ukraine, likely wanting to secure further options in the region, a British military update has said.

“Russia’s progress on the Izium axis had remained stalled since April, after Ukrainian forces made good use of the terrain to slow Russia’s advance,” Britain’s Ministry of Defence said.

“Russia likely seeks to regain momentum in this area in order to put further pressure on Sieverodonetsk, and to give it the option of advancing deeper into the Donetsk Oblast.”

Fighting is raging on the streets of Sievierodonetsk in eastern Ukraine and Russian forces are destroying “everything that can be used for defence”, the regional governor has said.

Luhansk Governor Serhiy Gaidai said Russia was shelling areas of the city that are still controlled by Ukraine but that Ukrainian forces would be able to “clean up” in the city once they received long-range artillery.

Despite the EU, the UK and the US ramping up sanctions, the Russian economy has shown surprising resilience, and defied predictions of a collapse pic.twitter.com/gHyk5KHa5o

Ukrainian fighters were holding out in the eastern city of Sievierodonetsk despite relentless Russian shelling, the regional governor said, as Moscow presses an assault that both sides believe could help shape the course of the offensive.

Russia has concentrated its troops and firepower on the small industrial city to secure the surrounding province on behalf of Moscow-backed separatists.

Ukraine’s forces pulled back to the city’s outskirts on Wednesday but have vowed to fight there for as long as possible. Artillery shelling has turned the city in Ukraine’s Luhansk province into a bombed-out wasteland.