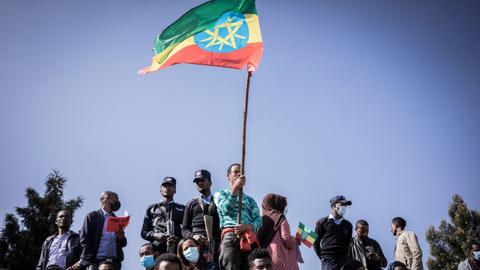 UN chief has called for an “unconditional and immediate” ceasefire in Ethiopia, where government forces are battling rebels from the northern Tigray region.

“The peace process in Colombia inspires me to make an urgent appeal today to the protagonists of the conflict in Ethiopia for an unconditional and immediate ceasefire to save the country,” Antonio Guterres said on Wednesday in Bogota during a visit to the South American country marking five years since a peace deal was signed.

“I would very much like Colombia to be the example followed by the leaders in Ethiopia,” Guterres added.

International alarm has mounted over the escalating year-long conflict in Ethiopia, prompting foreign governments to tell their citizens to leave amid fears the Tigrayan rebels could march on the capital Addis Ababa.

Guterres said a ceasefire should “allow for an inter-Ethiopian dialogue to resolve the crisis and allow Ethiopia to contribute again to the stability of the region.”

Abiy, winner of the 2019 Nobel Peace Prize, “is now leading the counter-offensive” and “has been giving leadership from the battlefield as of yesterday,” state-affiliated Fana Broadcasting Corporate reported.

It was not clear where exactly Abiy, a former radio operator in the military who rose to lieutenant-colonel, had deployed, and state media did not broadcast images of him in the field.

Officials have not responded to requests for details about his mission and whereabouts.

The fighting in the north of Africa’s second-most populous country has killed thousands of people and forced hundreds of thousands into famine-like conditions, according to UN estimates.

Foreign envoys have been frantically pushing for a ceasefire, though there have been few signs a breakthrough is coming.