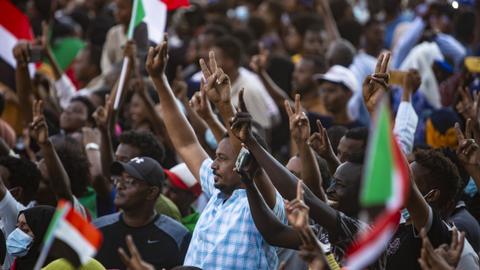 UN head Antonio Guterres says the “reports of violence are alarming and perpetrators must be brought to justice.”

UN Secretary General Antonio Guterres has urged Sudan’s generals to reverse their takeover of the country.

The appeal made by the UN chief came a day after tens of thousands of people took to the streets in the largest pro-democracy protest since last week’s coup.

Antonio Guterres said on Sunday that the generals should “take heed” of Saturday’s protests.

“Time to go back to the legitimate constitutional arrangements,” he said in a tweet.

We witnessed in #Sudan on Saturday the courage of so many people who peacefully protested military rule. The military should take heed. Time to go back to the legitimate constitutional arrangements. Reports of violence are alarming & perpetrators must be brought to justice.

He was referring to a power-sharing deal that established joint military-civilian rule following the ouster of longtime autocrat Omar al Bashir and his government in April 2019.

The UN envoy for Sudan, Volker Perthes, said meanwhile that he met with Abdalla Hamdok on Sunday, the deposed prime minister who remained under house arrest in the capital Khartoum.

“We discussed options for mediation and the way forward for Sudan. I will continue these efforts with other Sudanese stakeholders,” he said.

READ MORE:
What are the main political dynamics behind Sudan’s latest military coup?

Tens of thousands have turned out across the country for Saturday’s demonstrations, marching against the army’s October 25 power grab, when top General Abdel Fattah al Burhan dissolved the government, declared a state of emergency and detained Sudan’s civilian leadership.

At least three people were shot dead and more than 100 people wounded during Saturday’s demonstration, the independent Central Committee of Sudan’s Doctors said.

It takes the death toll since protests began to at least 11.

READ MORE: A military coup: What is happening in Sudan?