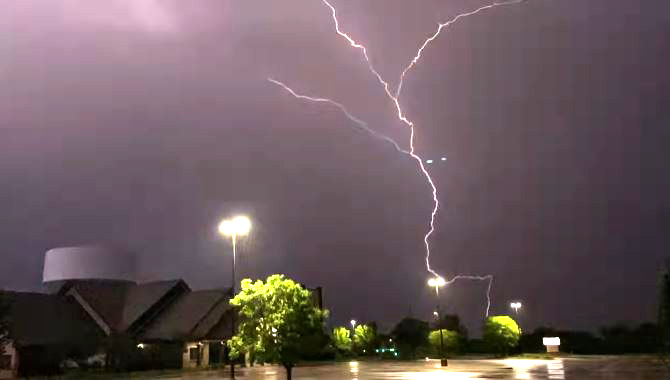 LAWRENCE (KSNT) — A spectacular show of upward-moving lightning was caught on camera as it lit up the sky Tuesday night amid storms that swept through northeast Kansas.

The large swath of storms affected 13 counties and lasted until 4 a.m. Wednesday morning.

“This reversal, of the more standard cloud-to-ground lightning, likely has to do with the fact that the nearby electric field had been disrupted due to prior bolts,” Matoush said.


Did you see the sundog in the Topeka sky?

According to the National Oceanic and Atmospheric Administration, there are two ways that lightning flashes can hit the ground: naturally downward, and artificially triggered upward. Downward lightning occurs during normal environmental “electrification.” Upward lightning can be “artificially initiated” by such things as tall structures or towers, and usually occurs in response to natural lightning.

Upward triggered lightning, like that captured in Kansas, typically follows a natural lightning flash, but it can be “self-triggered” on rare occasions, usually during winter storms accompanied by strong winds.