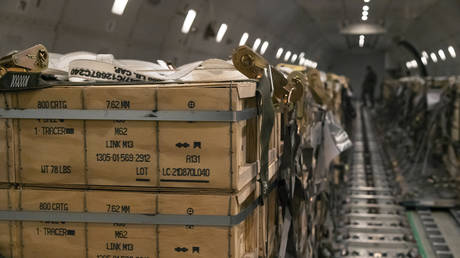 American aid to Kiev goes to NGOs run by “friends and families” of US politicians, Representative Marjorie Taylor Greene claims

The financial support America provides to Ukraine looks very much “like money laundering schemes,” Representative Marjorie Taylor Greene (R-GA) has told ‘The Truth With Lisa Boothe’ podcast on Monday. The money supposedly destined for Ukrainians ends up in the pockets of “non-profits and NGOs” that are often run by people close to the politicians in Washington, Greene has claimed.

“They want to get $40 billion to Ukraine and you have these $40 billion on top of the money that have already been given. That brings it to $53 billion. That is over two thirds of the State Department’s entire budget for the year,” the congresswoman said, referring to the latest aid package that is currently going through the US Senate.

According to Greene, the US officials are doing this to eventually fund the NGOs operated by “their families and friends.” “It is basically like money laundering schemes,” she has said.

.@RepMTG: “Because our government is completely corrupt, and I don’t say that lightly. It is a serious problem, and my eyes have been open to it actually, serving in Congress.”

The congresswoman believes these funds should be spent to deal with issues inside the US instead, including homelessness or human trafficking, which, according to Greene, have reached “record-high” levels.

Our tax dollars are just like one big slush fund for criminal operations and it needs to end.

Of the upcoming $40 billion aid package, $900 million is to be given to “qualified” organizations and NGOs for wraparound services, housing and medical services, the congresswoman said, adding that these organizations will be “eligible for any help the US government can give them.”

Washington also plans to provide $150 million for global agriculture and food programs at a time when US farmers are “on the verge of going out of business,” Greene said, adding that she has talked to the farmers in her district over the past week and found out they had been “hurt so badly by inflation and high fuel costs, chemicals and fertilizer costs… they are not breaking even.”

The congresswoman has also accused the US of being hypocritical about its alleged desire to “help the Ukrainian people.” Washington is being pouring money into Ukraine but is “totally ignoring” other conflicts around the world, she said, adding that “Ethiopia has a civil war right now, with thousands of people killed and millions displaced,” but the US pays little attention to this fact.

It is such a hypocrisy. It is not about saving lives but it certainly is about Ukraine.

Greene is not the only one concerned about the transparency of the US spending when it comes to aid for Ukraine. Last week, a quick vote on the $40 billion Ukraine aid package bill was blocked by Republican Senator Rand Paul from Kentucky. He demanded a special inspector general be appointed to monitor how the massive aid package is spent.

Paul insisted that his proposal be added to the bill, which would require that the revised legislation go back to the House for another vote after Senate approval. He noted that the latest package would bring total US aid to Ukraine to $60 billion since the conflict began in February, nearly as much as Russia earmarks annually for its entire defense budget. The Senator also argued that America would have to increase its debt and worsen its inflation crisis to make the aid available to Kiev.

Greene herself was among the 57 Republican representatives who voted twice against sending financial aid to Ukraine during its conflict. Both aid packages, however, received overwhelming support in the House and were passed 368-57.

On Saturday, US Senate Minority Leader Mitch McConnell (R-KY) also assured Ukrainian President Volodymyr Zelensky of the US support during his visit to Kiev. He also vowed to “get the job done” by passing the aid package bill.