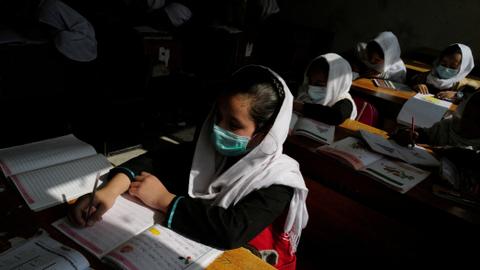 he US has confirmed that it has cancelled talks in Doha with the Taliban over the hardline groups’ decision to cancel secondary education for Afghan girls.

State Department spokeswoman Jalina Porter told reporters on Friday that the Taliban’s decision is a “potential turning point in our engagement” with Afghanistan’s de facto rulers.

“For the sake of Afghanistan’s future, and the Taliban’s relations with the international community, we urge the Taliban to live up to their commitments and to their people,” she said on a conference call.

“We also stand with Afghan girls and their families who see education as a path to realising their full potential,” she added.

The diplomatic row comes after Afghanistan’s educational institutions re-opened on Wednesday with girls who were to begin education beyond the sixth grade told by the Taliban to remain home.

The Taliban returned to power after 20 years of war, ultimately ousting by force the internationally-recognised government as NATO-led forces that supported it withdrew.

The decision to curtail girls’ education comes a little more than one week before a major international donor conference, which the UN had hoped would lead to hundreds of millions of dollars in humanitarian aid being pledged.

“The de facto authorities’ failure to reopen schools for girls above the sixth grade, despite repeated commitments, is a profound disappointment and deeply damaging for Afghanistan,” Guterres said.

“The denial of education not only violates the equal rights of women and girls to education, it also jeopardises the country’s future in view of the tremendous contributions by Afghan women and girls,” he added.

When the Taliban returned to power, they promised a softer rule compared with their first regime from 1996 to 2001, which became notorious for human rights abuses.

They claimed to respect women’s rights, and girls would be allowed to study through to university.

But the Taliban have imposed a slew of restrictions on women, effectively banning them from many government jobs, policing what they wear and preventing them from travelling outside of their cities alone.

In a joint statement on Thursday the foreign ministers of Britain, Canada, France, Italy, Norway and the United States, plus the high representative of the European Union, said the Taliban’s decision will harm the group’s prospects for legitimacy.

The signatories to the statement notably included Norway, which hosted landmark talks between the Taliban and several Western diplomats in January.

READ MORE:
How the Taliban elicits praise from the communities it has deprived of aid