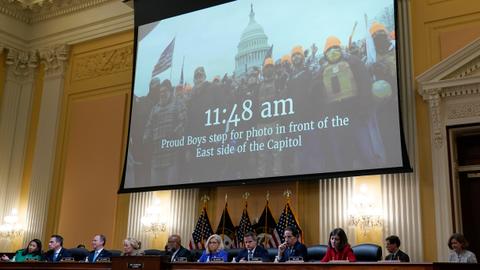 With a never-before-seen 12-minute video of the deadly violence and testimony from Donald Trump’s inner circle, the committee contended that the ex-president’s claims about election fraud led to the attack.

A congressional panel investigating the January 6 insurrection at the US Capitol last year has laid the blame firmly on Donald Trump.

The assault was hardly spontaneous but an “attempted coup”, and a direct result of the defeated president’s effort to overturn the 2020 election, it said on Thursday night.

“Jan. 6 was the culmination of an attempted coup, a brazen attempt, as one rioter put it shortly after Jan. 6, to overthrow the government,” Democratic committee chief Bennie Thompson said during the hearing.

In her opening remarks, Liz Cheney, the Republican vice chairwoman of the panel, said: “President Trump summoned the mob, assembled the mob and lit the flame of this attack.”

The first session — timed for prime time to reach as many Americans as possible — and five subsequent hearings will focus on Trump’s role in the effort to return him to the Oval Office by disenfranchising millions of voters.

The panel aims to demonstrate that the violence was part of a broader — and ongoing — drive by Trump and his inner circle to illegitimately cling to power.

Thompson warned that democracy “remains in danger” from a “conspiracy” that fueled the riot. pic.twitter.com/cExbSTN9qc

Ahead of this fall’s midterm elections, and with Trump considering another White House run, the committee’s final report aims to account for the most violent attack on the Capitol since 1814.

In a previously unseen video clip, the panel played a quip from former Attorney General Bill Barr, who testified that he told Trump the claims of a rigged election were completely wrong.

In another, the former president’s daughter, Ivanka Trump, testified to the committee that she respected Barr’s view that there was no election fraud. “I accepted what he said.”

Capitol Police Officer Caroline Edwards, who was present at the breach of the first barricade, described sustaining head injuries in clashes with the Proud Boys, whose leader has been charged with seditious conspiracy.

The riot left more than 100 police officers injured as the crowd of pro-Trump rioters charged into the Capitol. At least nine people who were there died during and after the rioting.

Trump has defiantly dismissed the probe as a baseless “witch hunt”, but the public hearings were uppermost in his mind on Thursday.

He fired off a tirade on his social media platform, defending the insurrection as “the greatest movement in the history of our Country to Make America Great Again”.