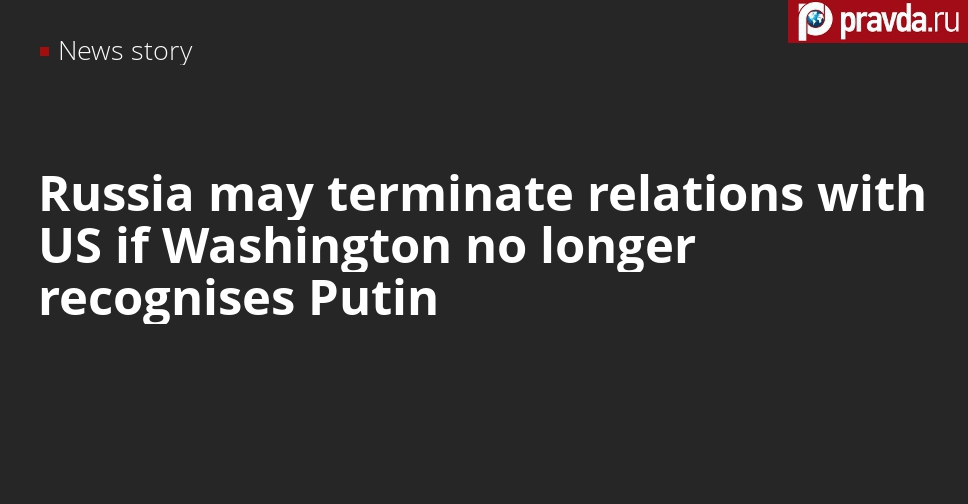 US congressmen put forward a proposal not to recognize Putin as president if he runs in 2024 again. According to the authors of the proposed resolution, Russia’s initiative to zero out Putin’s term in the office as President is illegitimate.

Representatives for Russia’s Federation Council called it interference in the Russian elections.

Two members of the House of Representatives proposed to US Congress not to recognize Vladimir Putin as the President of Russia, if he stands as a candidate for the next presidential election after his current term draws to an end in 2024. They submitted a corresponding draft resolution, and in the event US Congress approves this document, the relationship between Russia and the United States is likely to be terminated, Vladimir Dzhabarov, First Deputy Chairman of the Federation Council Committee on Foreign Affairs said, RIA Novosti reports.


“I am convinced that this document will not go through. However, should the resolution be adopted, it will lead to the termination of relations between Russia and the United States,” said Dzhabarov.


In his opinion, the draft resolution is cynical and devoid of any common sense.

In turn, the vice-speaker of the Federation Council, Konstantin Kosachev, called the congressmen’s proposal an act of interference in the Russian presidential election.


“The Americans have started to interfere in the presidential elections in Russia too early this time. Otherwise, there is nothing new. This is explicit interference in our internal affairs. It is also a provocation aimed at disrupting the emerging normalization of bilateral relations,” he wrote on Facebook.


The draft resolution was proposed by Tennessee Democrat Steve Cohen and South Carolina Republican Joe Wilson. The congressmen wrote that the amendments to the Constitution, which reset Putin’s presidential terms to zero and gave him an opportunity to run in the future, were adopted in violation of the laws and international obligations of Russia and were therefore illegal. The congressmen believe that the United States should not recognize Putin as president if he continues staying in power as President of Russia after 2024.

It should be noted that if the resolution is approved, it will be recommendatory in nature.

The voting to introduce amendments to the Constitution of Russia was conducted from June 25 to July 1, 2020. It was possible to vote either for all the amendments at once, or against them. According to the official data of the Central Electoral Commission of the Russian Federation, as many as 77.9 percent of electors supported the amendment to the Constitution, while 21.2 percent were against.

One of the amendments stipulated zeroing out Putin’s presidential terms. By law, the President of Russia cannot hold this post for more than two terms. The amendment lifted this restriction for those who took office as president prior to its entry into force.

Even before the vote on the amendments, Putin said that he did not rule out a possibility of running for president again, but added that he had not yet made a decision. In October, responding to a question about his plans for re-election, Putin said that discussions on this topic destabilize the situation. “The situation should remain calm and stable, so that all government bodies, all state structures could work confidently, calmly looking into the future,” he said.