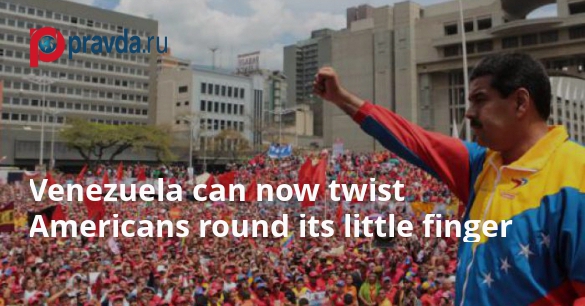 The US is making a new attempt to receive oil from Venezuela — now without conditions. Nicolas Maduro may safely raise the stakes.

Maduro may boldly raise stakes at oil talks with USA

USA is critically dependent on oil supplies from Venezuela. The US urgently needs reliable heavy crude oil suppliers after Washington embargoed Russian oil and petroleum products imports. Fuel prices started rising at once and exceeded the mark of $4 per gallon for the first time in all American states. The summer season is approaching, and prices are expected to rise to as much as $10 per gallon.

This prompted US President Joe Biden to lift a few sanctions from Venezuela (the Latin American country also lives under an oil embargo). In particular, Biden allowed Chevron to start negotiations with the government of President Nicolas Maduro on future activities in the country. This may come as USA’s de facto recognition of Maduro’s legitimacy.

Washington raised the topic of the need to restore relations with Caracas back in March. However, the United States then failed to agree on anything because of the request to Caracas not to approach Russian President Vladimir Putin against the backdrop of the crisis in Ukraine.

The Biden administration is not putting forward any conditions now. Instead, the Americans now say that this is a step of good will to facilitate negotiations with the opposition.

The Biden administration was not even embarrassed by the fact that ex-ambassador to Russia Carlos Faria had just been appointed Venezuelan foreign minister. Moreover, Faria immediately held a telephone conversation with his Russian counterpart Sergey Lavrov, in which they confirmed their readiness to deepen bilateral cooperation.

Venezuelan dissidents hiding in the United States, mainly in the state of Florida, who voted for the Republicans in the last elections, predictably expressed a negative reaction to such a move, but it did not stop the Biden administration either.

Venezuela has been deprived of an opportunity to legally sell oil to its traditional American market for three consecutive years now. Oil exports accounted for as much as 96% of income that the budget of Venezuela received in 2019.

Noteworthy, Biden only considers negotiations. Chevron will not drill or export oil. This does not look like a promising prospect — against the backdrop of rising oil prices, Maduro does not have a deadline factor. If Maduro takes up an option to negotiate, he better set forth a package of counter-claims.

In March, the President of Venezuela demanded all sanctions should be lifted. He can raise the stakes now and demand Washington recognizes him as the legitimate president and withdraws the recognition of Juan Guaido, the puppet. Maduro should also require the USA should not interfere in Venezuela’s internal affairs.

In the United States, Maduro was charged with conspiracy to “inundate the United States with cocaine” and use the drug trade as a “weapon against America.” One could take serious offence indeed.

Venezuela has no reason to surrender to USA’s mercy

In early May, Iranian Oil Minister Javad Ovuji paid a visit to Caracas. The parties discussed ways to overcome the consequences of US economic sanctions against both countries. In other words, Venezuela does not even think of surrendering to the mercy of the United States.

Caracas has never been against oil trade with the United States. At the same time, Venezuelans realise that Washington’s goal is to contain all possible allies of the Russian Federation in the Western Hemisphere.

Maduro may take advantage of the current situation for momentary benefits. Sooner or later, the Americans will toughen pressure on him and ask him to leave. The United States will not give Maduro security guarantees now, so it is unlikely that Biden’s search for an alternative to Russian oil in Venezuela will be successful.