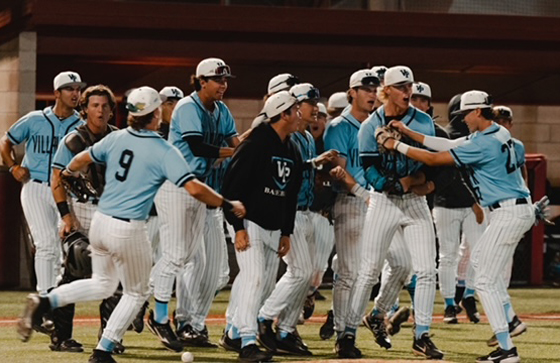 SANTA ANA >> Zach Brown had already helped the Villa Park baseball team win a game in the Boras Classic South with his bat.

In the semifinal Thursday between Villa Park and Notre Dame of Sherman Oaks, Brown got the job done with his arm

Brown pitched a complete-game in a 2-1 victory at Mater Dei High School that put the Spartans in the championship game.

The Spartans (23-2), who are ranked No. 4 in Division 1 of the CIF Southern Section, will play for the championship against JSerra at 6 p.m. Friday.

“He had that competitive fire out there tonight,” Villa Park coach Burt Call said of Brown. “He stepped up and did a great job for us.”

After giving up a one-out double to Max Aude in the seventh, Brown retired the next two batters on a strikeout and groundout to help extend the Spartans’ winning streak to 11 games.

“Coming into this game, I was kind of ready for whatever moments were going to happen,” said Brown, who allowed six hits, no walks and struck out five. “I knew anytime I threw a pitch I had confidence that someone was going to make a play.”

Brown was the hero in Villa Park’s first game of the tournament, hitting a walk-off home run Tuesday in the Spartans’ 5-4 victory over Servite.

Notre Dame’s Madden Ocko tripled to lead off the second and later scored on a groundout to give the Knights a 1-0 lead.

Knights junior right-hander Oliver Boone shut the Spartans down over the first three innings and it appeared as though the Spartans’ winning streak could be in jeopardy.

But back-to-back RBI singles from Gavin Grabovac and Tyler Gordon in the bottom of the fourth gave the Spartans a one-run lead, which is how it stayed.

“I think our team is so confident that we can make some things happen and score some runs, so if even if we get down by a run or two, we have the confidence that we’re going to come back and battle and compete,” Call said. “We’ve done that all season where we’ve been able to manufacture runs and come up with clutch hits.”

The night before, Grabovac hit a grand slam in the fourth to help the Spartans defeat Huntington Beach, 7-2.

Pitchers Diego Herrera, Zack Romero and Justin Lee combined for a 5-0 victory over Point Loma on Tuesday and Coe Clark threw complete game in the Knights’ 5-0 victory over Corona on Wednesday.