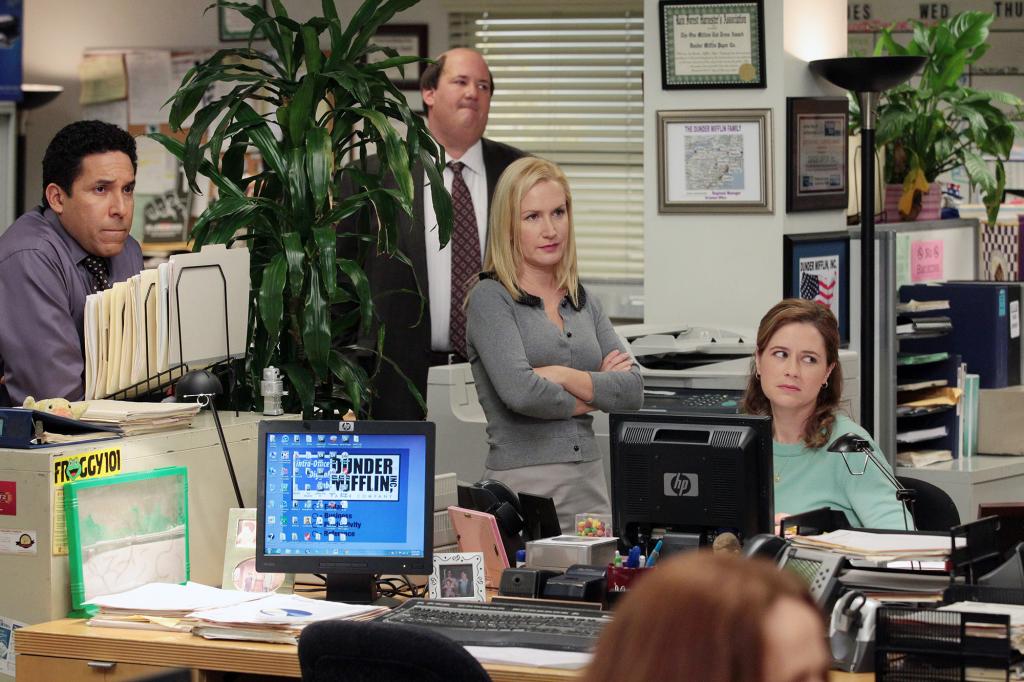 “The Office” almost put several members of the cast and crew permanently out of work.

Two stars from the comedy series recently revealed that they almost died twice while filming a certain episode.

Jenna Fischer, who starred as Pam on the hit NBC show, and Angela Kinsey, who played Angela, shared all the behind the scenes drama in their new book “The Office BFFs: Tales of The Office from Two Best Friends Who Were There.”

In excerpts from the book, released by Mashable, the two former co-stars reveal that actor Bryan Cranston, 66, stepped in to direct season 9 episode 4, titled “Work Bus.”

In the episode, the co-workers are forced out of their office building and into a “mobile work station” for the day.

Fischer, 48, noted that the “small airport shuttle” was crammed with 14 actors, four crew members, several desks, chairs, lamps, printers, a water cooler, a microwave, a giant-screen TV, and a coffeemaker.

“What could go wrong? Who could have predicted that Ellie Kemper would pee her pants, or that the entire cast would almost be killed — twice?” she wrote.

“It was a very hot day and whenever we started filming, the air-conditioning on the bus had to be turned off because it was too noisy. We were basically in a moving hot tin can with no air. I thought Brian [Baumgartner] and Creed [Bratton] were going to melt. Oscar [Nunez] looked dead inside. Plus, it was a very curvy road. Jenna was getting a little carsick even though she had a forward-facing chair,” Kinsey wrote.

“At that point, the heat and the nausea seemed like our worst obstacles.”

Once out on the open road, the script called for a scene of “Dwight driving like a maniac.” The bus was hooked up to a rig when recording Rainn Wilson at the wheel. But the reactions didn’t look real enough as the cast members pretended to be thrown around so a stunt driver was called in.

“There were no stunt actors, however. We stayed on and were told to keep doing what we’d been doing. And off we went,” Fischer wrote.

“We were all bouncing down the road, blissfully unaware of what was about to happen. We were saying our lines and everything was going smoothly when all of a sudden, we heard the assistant director yell, ‘Swerve!’” Kinsey explained.

The stunt driver swerved “HARD” and the cast and all of their office furniture, props, and set decorations went flying around the bus.

“We were all smushed up against the side of the bus. Ellie’s chair crashed into Jake [Lacy]’s. Jake’s crashed into mine, and I was shoved against the glass window. Papers were everywhere. I caught our desk lamp as it slid into my lap. A few people fell on the bus floor, and we could barely see them because so many things had fallen on top of them,” Kinsey explained.

The cast was let go for lunch after being boxed into the crammed sweltering set and were happy to learn that the crew had acquired a portable air-conditioning unit that would blow air in through the sunroof.

“Off we went. No more laughing fits. No more peeing. We were nailing our shots. That’s when I noticed a funny smell,” Fischer said she continued to raise the concern but was ignored, until others began to agree. “We began debating whether the bus smelled funny. Then our camera operator spoke up. She didn’t feel well. She stumbled and set down her camera.”

“Guess what?” Fischer wrote. “The portable air-conditioning unit’s INTAKE hose was right next to the EXHAUST pipe on the bus. So that hose was sucking in exhaust and blowing it straight into the sunroof of the bus. We were all being slowly poisoned. Or not so slowly, actually.”

The cast and crew survived the harrowing day of shooting and continued on wrapping up the final season of the beloved sitcom.  The ninth and final season concluded on May 16, 2013,