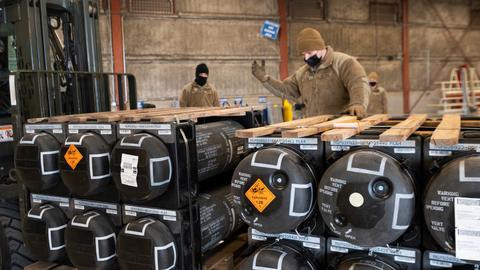 The Kremlin has accused the West of preventing a “quick” end to Russia’s military campaign in Ukraine by supplying weapons to the pro-Western country.

“Coupled with the flow of weapons that these countries are sending to Ukraine, these are all actions that do not contribute to the quick completion of the operation,” Kremlin spokesman Dmitry Peskov told reporters.

Peskov also said that humanitarian corridors to get civilians out of Mariupol’s Azovstal steel plant were functioning, after the Russian army announced a three-day ceasefire at the site.

Russian negotiator accuses Kiev of ‘rolling back’ on agreements -TASS

A Russian lawmaker taking part in talks with Ukraine said negotiations are difficult and accuses representatives from Kiev of “rolling back” on existing agreements, TASS news agency has reported.

“I am one of the four negotiators from the Russian side, however, it is difficult to negotiate. Ukrainian counterparts come to an agreement, and then roll back”, TASS cited negotiator Leonid Slutsky as saying.

Ukraine has said Russia is “trying to destroy” its remaining soldiers holed up in Mariupol’s Azovstal steel plant, with Kiev’s last defenders in the battered city saying Moscow forces have broken into the giant factory.

“Russian occupiers are focusing on blocking and trying to destroy Ukrainian units in the Azovstal area,” Kiev’s army said in a statement.

“With the support of aircraft, Russia resumed the offensive in order to take control of the plant.”

Poland and Sweden are co-hosting an international donors’ conference in Warsaw to raise funds for humanitarian efforts to help Ukraine, where thousands have been killed, cities devastated and millions of people displaced by Russia’s attack.

The High-Level International Donors’ Conference for Ukraine is jointly organised by the Polish and Swedish prime ministers in collaboration with the European Commission and European Council presidents.

The aims are to allow the international community to announce new pledges to meet the immediate humanitarian needs of Ukrainian society and to create a forum to discuss how to support Ukrainian society over the longer term.

UK strips Moscow stock exchange of a status that enables investors to access UK tax benefits when trading securities on the bourse, further reducing the amount of money channelled into Russian assets pic.twitter.com/C6VN7IvxGa

A Su-24, a Su-25 and a Su-27 were shot down by Russian air defence systems in three different areas of Ukraine, Defence Ministry spokesman Igor Konashenkov said at a press briefing in Moscow.

He said another 14 unmanned aerial vehicles and two rockets of the Smerch multiple rocket launcher were also destroyed.

“With the Moscow stock exchange failing to withdraw their restrictions on foreign investors, the UK had no choice but to remove its recognised status,” said Lucy Frazer, Financial Secretary to the Treasury.

“This will stop further money being channelled into Russian assets and send a clear message that there is no case for new investment in Russia.”

Russia has said that its artillery has struck multiple Ukrainian positions and strongholds overnight, killing over 600 fighters.

“The armed forces of the Russian Federation continue the special military operation in Ukraine”, the defence ministry said. “Over 600 nationalists and 61 units of weapons and military equipment were destroyed”.

The defence ministry also said its missiles destroyed aviation equipment at the Kanatovo airfield in Ukraine’s central Kirovohrad region and a large ammunition depot in the southern city of Mykolaiv.

Two villages in Russia’s Belgorod region bordering Ukraine have been shelled by Ukraine, Governor Vyacheslav Gladkov has said, adding that there are no civilian casualties.

“There is shelling from the Ukrainian side on Zhuravlyovka and Nekhoteevka,” he said.

Ukraine’s General Staff says the country’s forces have made some gains on the border of the southern regions of Kherson and Mykolaiv and repelled multiple Russian attacks in the east.

In its daily morning update, the General Staff said that the Russians “lost control over several settlements on the border of Mykolayiv and Kherson regions.” Ukrainian forces also repelled 11 attacks in the Donetsk and Luhansk regions, the update said.

At the same time, fighting over the Azovstal plant in Mariupol continued, the General Staff said. “With the support of aircraft, the enemy resumed the offensive in order to take control of the plant,” the update said, adding that the Russian troops were “trying to destroy Ukrainians units” at this last remaining pocket of Ukrainian resistance in the ravaged port city.

Five civilians have been killed by shelling from Russian forces in Ukraine’s Luhansk region in the past 24 hours, governor Serhiy Gaidai has said.

Gaidai said the shelling focused on Sievierodonetsk and Popasna, Hirske and Lysychansk.

A Russian-announced ceasefire is due to begin at the besieged steel plant in the devastated Ukrainian city of Mariupol, to allow civilians to flee even as its defenders vowed to fight to the end.

“The Russian armed forces will open a humanitarian corridor from 0500 to 1500 GMT (08:00 to 18:00 Moscow time) on May 5, 6 and 7 from the site of the Azovstal metallurgical plant to evacuate civilians,” the ministry said.

Japan will face “difficulty” to immediately follow a move to cut off Russian oil imports over the Ukraine conflict, its minister of economy, trade, and industry Koichi Hagiuda has said.

Hagiuda made the remark during a visit to Washington, after the European Union’s executive proposed the toughest package of sanctions yet against Moscow, including the embargo on crude oil.

“Given Japan has its limit on resources, we would face some difficulty to keep in step immediately” with other countries, Hagiuda told reporters.

‘They were constantly shelling us’

Ukrainians who were trapped in the Azovstal steel plant in Mariupol recount their horror stories pic.twitter.com/zivE9fwtMU