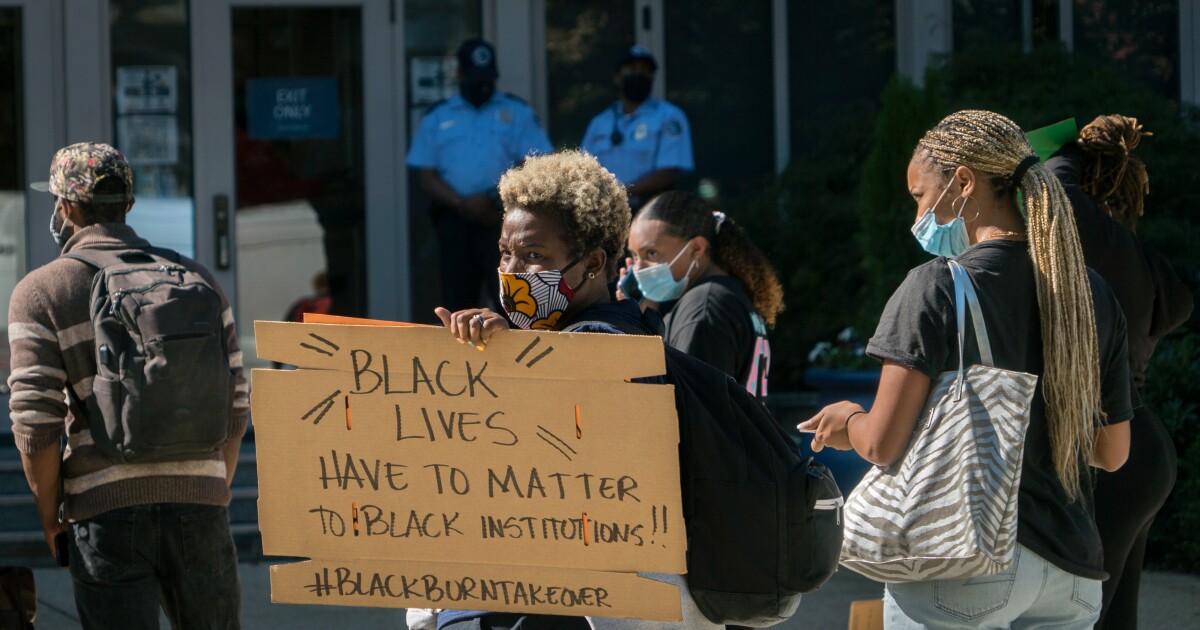 The longest sit-in in Howard University’s history may enter a new phase on Friday, when Wayne A.I. Frederick, the university’s president, is slated to address the community in a virtual town hall — a key demand of the student activists who began their occupation of the student center 24 days ago.

Since October 12, more than 100 students at the historically Black institution in Washington, D.C., have been occupying its Armour J. Blackburn University Center, or camping nearby, to compel leaders to focus on what students are calling poor on-campus housing conditions, low availability of affordable off-campus housing, and a lack of student representation in university decision-making.

Photos of mold in the dorms, complaints of rodent infestations and a shortage of off-campus student housing, and accusations of misappropriated tuition dollars have circulated on social media over the past three weeks, sparking outrage from supporters of the student activists.

They’re not on our side, they’re not working with us. None of our demands have been met.

Meanwhile, the university has maintained that it is committed to keeping housing affordable for students and empowering student leaders. Administrators deny that the dormitories struggle from widespread mold problems. Officials had previously said they would meet with protesters only after they left the Blackburn building, but now Frederick is inviting them to participate in Friday’s town hall.

The trajectory of the occupation is unclear. As the standoff between administrators and students continues, the prospect of an amicable resolution feels increasingly remote. Temperatures are dropping into the 30s overnight, and the tents offer minimal protection against the elements. But the students, fueled by Cup Noodles, gifted with hand warmers, and equipped by a large social-media following, have resolved not to leave until their demands are met.

Recent statements from Howard’s leaders only seem to have angered students more. On Tuesday evening, a tweet from Howard University’s official account caused a firestorm.

“We’re sad to report the occupation of Blackburn has led to an unintended consequence for the HU community,” the tweet read. “Due to the café being closed, some Sodexo workers have been laid off. We are committed to working with our students to avoid more repercussions like this one.”

Some users called out the administration for blaming students for the actions of Sodexo, a $12.4-billion multinational corporation that provides dining staff to hundreds of other colleges. The company remains “committed to providing exceptional service during these difficult times, and we hope that both parties will soon come to a mutually beneficial resolution,” a Sodexo representative said in an email to The Chronicle.

Charles H.F. Davis III, an assistant professor at the University of Michigan at Ann Arbor’s Center for the Study of Higher and Postsecondary Education, said students being responsible for the letting go of Sodexo workers “would make no fiscal or material sense,” but institutions often scapegoat students when they can.

Elishabeth Cunningham, a Howard sophomore and participant in the protest, said the university’s insinuation that the layoffs were students’ faults was “a slap in the face.”

“We’re simply trying to address problems that should have been addressed decades ago,” she said. “And if they would simply meet our demands, we would leave so quick. We don’t want to be here. We have to be.”

The Longest Protest in Howard History

Wearing Army green, camouflage, and Timberland boots, and standing in the vestibule of Howard’s Blackburn Center, Aniyah Vines, a 21-year-old political-science-and-criminology double major, looked the picture of a revolution leader.

She’s the founder of the Live Movement, an organization that advocates for students at historically Black colleges. She’s also leading the takeover of the Blackburn Center, which administrators have shut down. More than 100 students are camped overnight outside in colorful tents.

Vines said she is skeptical of the university’s messaging.

“They’re not on our side, they’re not working with us,” Vines said. “None of our demands have been met.”

The sit-in began on that mid-October Tuesday around 8 p.m., when more than 150 students took over the Blackburn building following a town hall hosted by the Howard University Student Association. The group had invited President Frederick, who did not attend because of a scheduling conflict, according to Frank Tramble, Howard’s chief communications officer.

“I don’t know what scenario, where you can tell an executive what time to be somewhere, and when they tell you that they can’t make it and let’s try for a different date, that you hold the meeting anyway, around it,” he said.

Tramble declined The Chronicle’s request to interview Frederick, whom he said was unavailable before his scheduled address on Friday.

The protesters have no shortage of support. Volunteers have driven from as far as Texas in U-Hauls, and hopped on planes from California to assist them, from providing heated blankets and air mattresses to cases upon cases of bottled water. Local activist organizations like Freedom Fighters DC and Harriet’s Wildest Dreams have helped, too.

“We’re college students, we’re broke. We can’t afford all the stuff that you see, but people are bringing it in for free because they stand in solidarity with us. They support us,” Vines said. “A lot of them are parents, alumni, or just Black people seeing younger Black people being oppressed on a campus. And they say, ‘that’s not right.’”

In solidarity with students at Howard, dozens of students from Clark Atlanta University and Morehouse, Morris Brown, and Spelman Colleges — known as the Atlanta University Center Consortium — protested for better housing conditions on their campuses and increased federal funding for HBCUs, among other things, The Atlanta Journal Constitution reported. After two days, David A. Thomas, the president of Morehouse, met with students to talk about their concerns.

Howard executives, of course, hold no romantic notions about the protests. They counter protesters’ accusations that they’re leaving students out to dry with evidence of the investments they have made in their most vulnerable students, and a reminder that the cost-of-living challenges students face at Howard are fairly typical among peer institutions.

“This is a city that is very expensive to live in,” Tramble said. “We know that, which is why we subsidize housing, which is why we’ve gone out and gotten an additional 700 rooms.”

In 2016, Howard announced a 40-year partnership with Corvias, a property-management company that promised to provide additional housing for students.

Tramble said the university houses about 60 percent of students, with guaranteed housing for freshmen and sophomores.

“We don’t have a housing crisis, and we don’t have individuals who are homeless that we’re not helping,” he said.

As far as housing conditions go, Tramble denied the existence of vermin problems and said there have been 39 reports of mold this year, accounting for only a small percentage of the 2,700 rooms on campus.

“I still have yet to see one bit of proof” of rodents, “as someone who was walking through those dorms, to see that that’s the truth,” Tramble told The Chronicle.

Cunningham, the sophomore protester, views the activists’ course as the better of several options. Living in tents or in the Blackburn Center is disgusting, she says, but so is living in the dorms.

“You can either sleep in this cold … building,” she said, including a more colorful adjective to describe the building, “or you can go home to some mold and some rats and roaches,” she said. “It’s like, pick your poison. And this is the better of the two. So that keeps a lot of people going.”