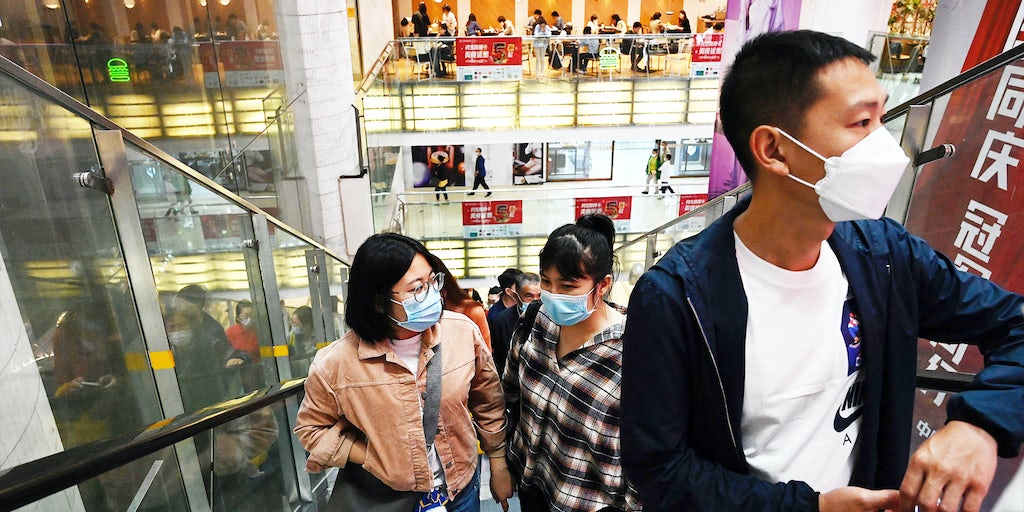 Golden Week, China’s seven-day holiday beginning Oct. 1, has long been a barometer for consumer sentiment. But this year’s holiday is proving to be a break with tradition for a number of reasons, leaving brands and retailers in a race to capture new consumers in an environment of uncertainty.

For weeks, pressure has been intensifying on brands and retailers to make up for ground lost in August, when the traditional sales boost from Qixi, China’s Valentine’s Day at the beginning of the month, failed to materialise. The main culprits: new Covid-19 outbreaks in Fujian and other provinces leading to a retightening of restrictions, exacerbated by Typhoon Lupit.

“No one expected sales in August to suffer like they did… A lot of brands underperformed, so they’ll have to make up for it,” said Pablo Mauron, managing director for China at research and market intelligence firm Digital Luxury Group.

The big challenge is that though holiday travel — and shopping — appear to be resuming after 2020′s decline, the profile of a typical traveller is changing. While the “silver generation” still might be an important part of the Golden Week travel brigade, younger Chinese are increasingly travelling and whatever the age, Mauron expects China’s consumers to be looking for opportunities “to indulge themselves.”

As brands are learning quickly, that indulging will very likely take place closer to home, as domestic travel booms, against a backdrop of new consumer-spending policies from Beijing and a resurgence in national pride, or guochao, in local heritage destinations.

“[The pandemic] has helped a lot of people discover the beauty of travelling in the mainland,” said Martin Moodie, Hong Kong-based founder of travel retail business intelligence publication, The Moodie Davitt Report. “A year ago [celebrating Golden Week locally] was the only alternative,” marking the start of what might be a longer-term trend given that he doesn’t expect outbound China to pick up substantially until after the Beijing Winter Olympics in 2022.

Travel agency platform Ctrip reports that bookings for scenic attractions are up more than 30 percent from last October, leading it to forecast that this year will beat 2020′s figures, when 637 million domestic visits generated 466.6 billion yuan ($72.2 billion) in revenue for the tourism sector.

As for this year’s Golden Week, the cities receiving the highest bookings for the weeklong holiday on Ctrip were Shanghai, Chengdu Sanya and Hainan, while Beijing leads the pack, thanks in part to the recent opening of Universal Studios, the travel site reported on Sept. 21.

The choice of destinations certainly has been influenced by Beijing’s policy initiatives to spur national consumption. This includes 2020′s increase in the annual amount of tax-free shopping for individuals visiting duty-free hub Hainan to 100,000 yuan from 30,000 yuan, the highest allowance in the world.

One destination that is benefiting from the policy change is Hainan. By July 30 this year, the island’s duty-free market reported 226 percent year-on-year growth, to 46.8 billion yuan.

As Moodie puts it, “Hainan is ticking a lot of boxes as a shopping destination,” which now includes the glitzy new duty-free shopping complex from luxury travel retailer DFS Group and Shenzhen Duty Free Group. Located in downtown Haikou Mission Hills resort, the complex will eventually cover 30,000 square metres and is already home to the largest beauty hall in DFS’ global network.

Demographics are also reshaping spending trends during Golden Week and other holiday seasons. According to Ctrip, travellers born after 1990 account for 40 percent of Golden Week bookings while those born after 2000 (an age bracket roughly synonymous with Gen-Z) are catching up, with their bookings up 5 percent year-on-year. Various surveys are showing that these travellers are different from their older counterparts, more swayed by destination recommendations made on social media while opting for more adventure holidays and preferring solo to group travel.

Amid all this, Digital Luxury Group’s Mauron said Golden Week is a time for brands to be more creative than, for example, during Qixi, since the weeklong October holiday does not have any particular narrative or parameters that brands need to work within.

“Tap into travel but give it a much more local flavour,” is the way Mauron puts it.

That is the case with this year’s Golden Week campaign from Foreo. As part of an afternoon tea theme, the Swedish beauty device maker is gifting customers who spend a certain amount on Foreo product tea-for-two at resorts on Hainan island.

As China’s domestic travel retail thrives and travel restrictions continue to keep mainland visitors out of flagships in Europe in the US, Mauron encourages brands to make the most of the situation to build longer-term brand loyalty.

While capturing customers’ digital information after shoppers return to their home countries has long been a challenge for brands, it’s much easier for brands to stay in touch with local shoppers in China by integrating data with apps like WeChat.

Even when global travel retail resumes, maintaining those relationships will give some brands an edge, said Mauron. “Locally, it’s nothing but opportunity.” 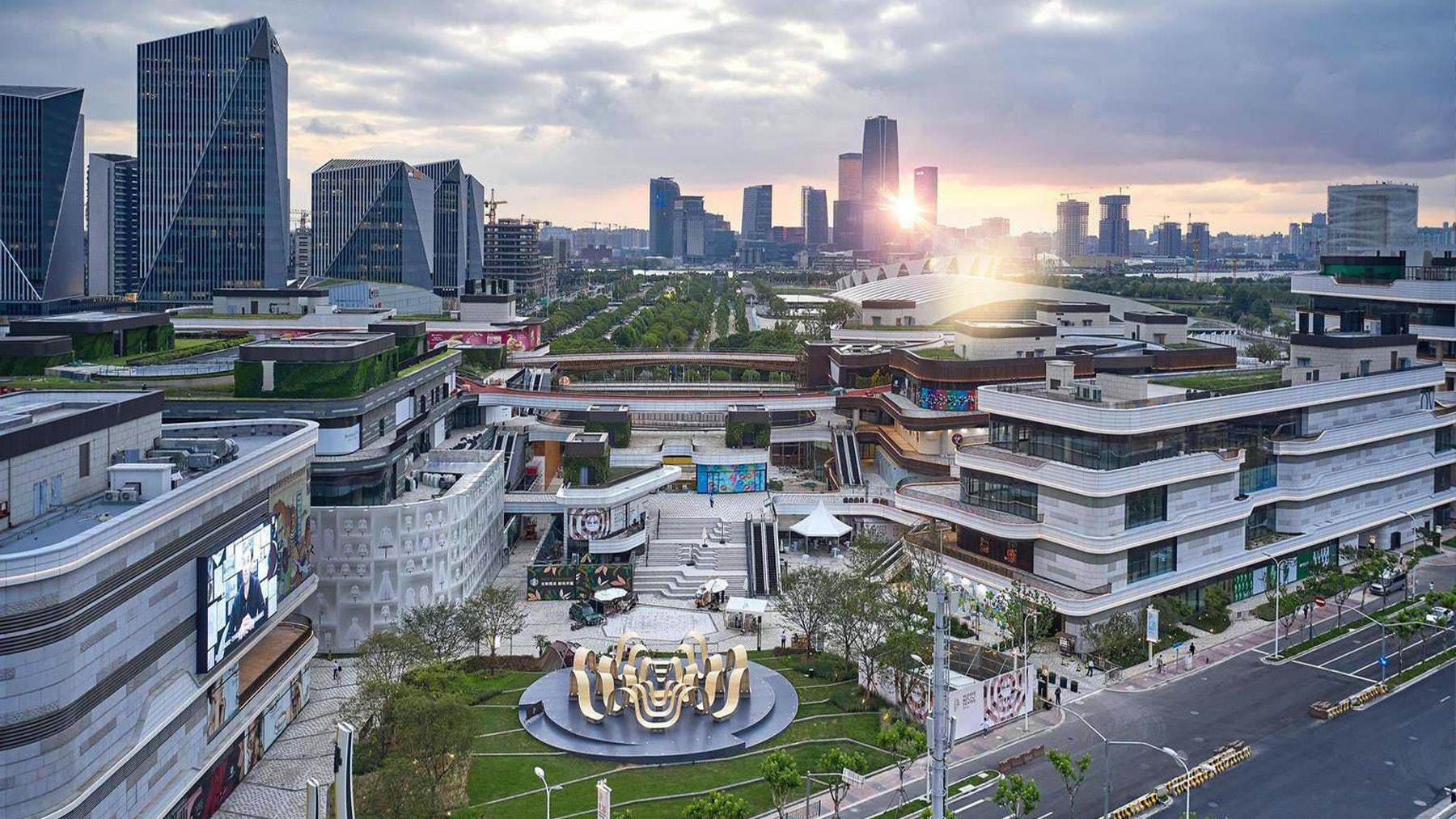 Swire Properties on Sept. 30 opened Taikoo Li Qiantan, an open-plan shopping complex located next to Shanghai’s financial district. Covering around 120,000 square meters, the mixed-use space and boutiques house brands owned by LVMH, Kering and Hermès. Several brands have opened flagships and concept stores in the new development, including Moncler’s largest House of Genius boutique in the country. According to local authorities, it will be the site for 23 office projects, nine large commercial complexes and 20 residential projects, making Qiantan a new fashion and luxury shopping destination in Shanghai’s Pudong New Area. (Queennie Yang for BoF)

Chinese sportswear group Peak Sports completed nearly $300 million of strategic financing, led by China Resources National Xiamen Consumer Fund. The capital will be used for product and sales development as well as brand building. The company is focusing on creating a greater physical presence in China’s first- and second-tier cities, with plans to open between 800 and 1,000 concept stores in the next three years, the company said in 2020. Peak Sports has also disclosed that it has plans to file for a mainland listing next year. (Queennie Yang for BoF) 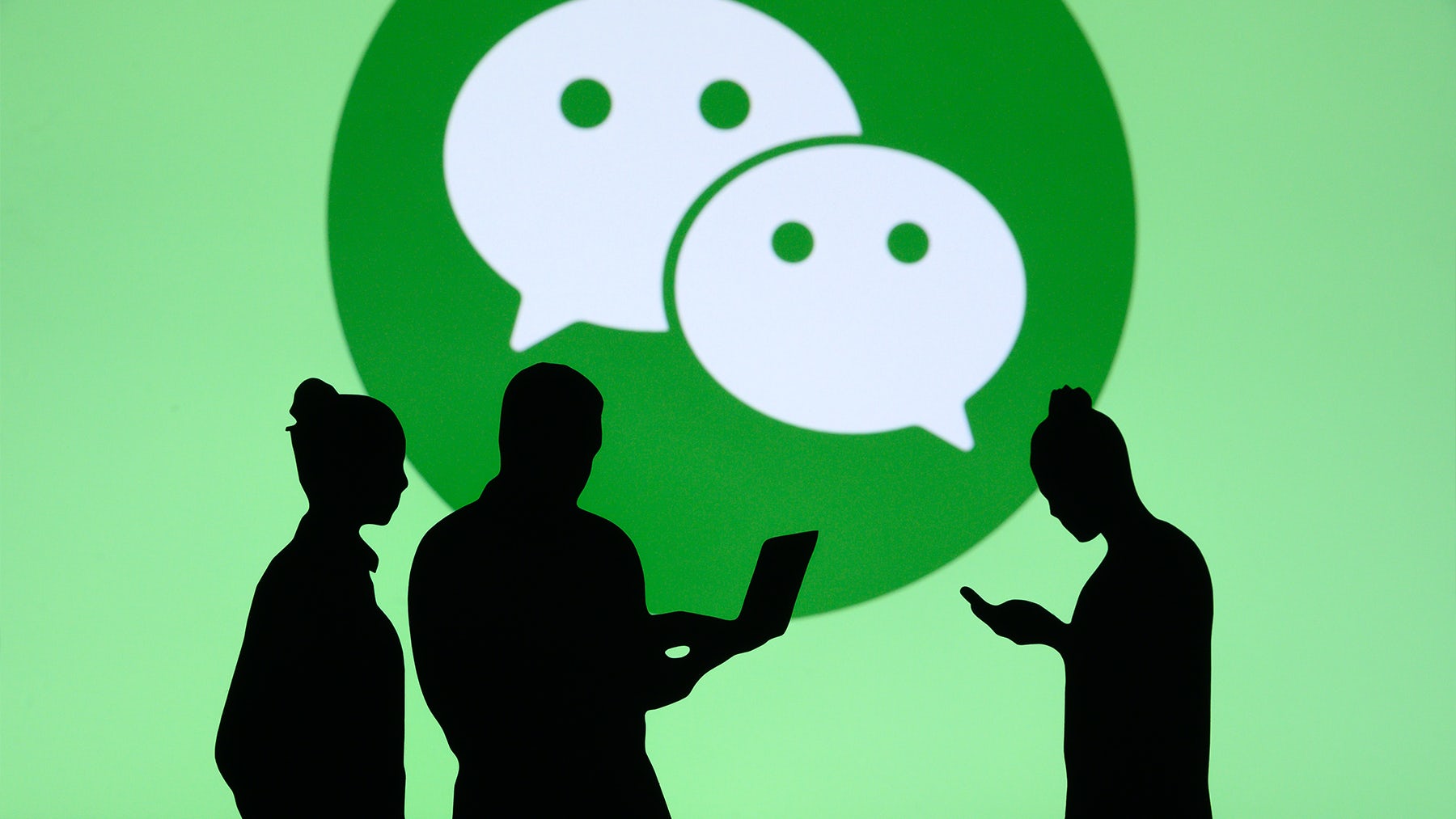 Amid Regulatory Pressure, Alibaba Introduces WeChat Pay on Some Apps

In a sign that Chinese tech’s “walled gardens” may be opening up, Alibaba Group has added archrival Tencent’s payment system to its apps, including food delivery platform Ele.me and cross-border e-commerce platform Kaola. Though WeChat Pay isn’t available on Alibaba’s Taobao app, a representative said the company has plans to introduce multiple payment options. The decision follows Beijing’s move to even out competition within China’s digital ecosystem, where top technology companies have long excluded other apps’ links from their own platforms. Last month, Tencent allowed WeChat users to link to rivals’ apps for the first time in years. (Bloomberg) 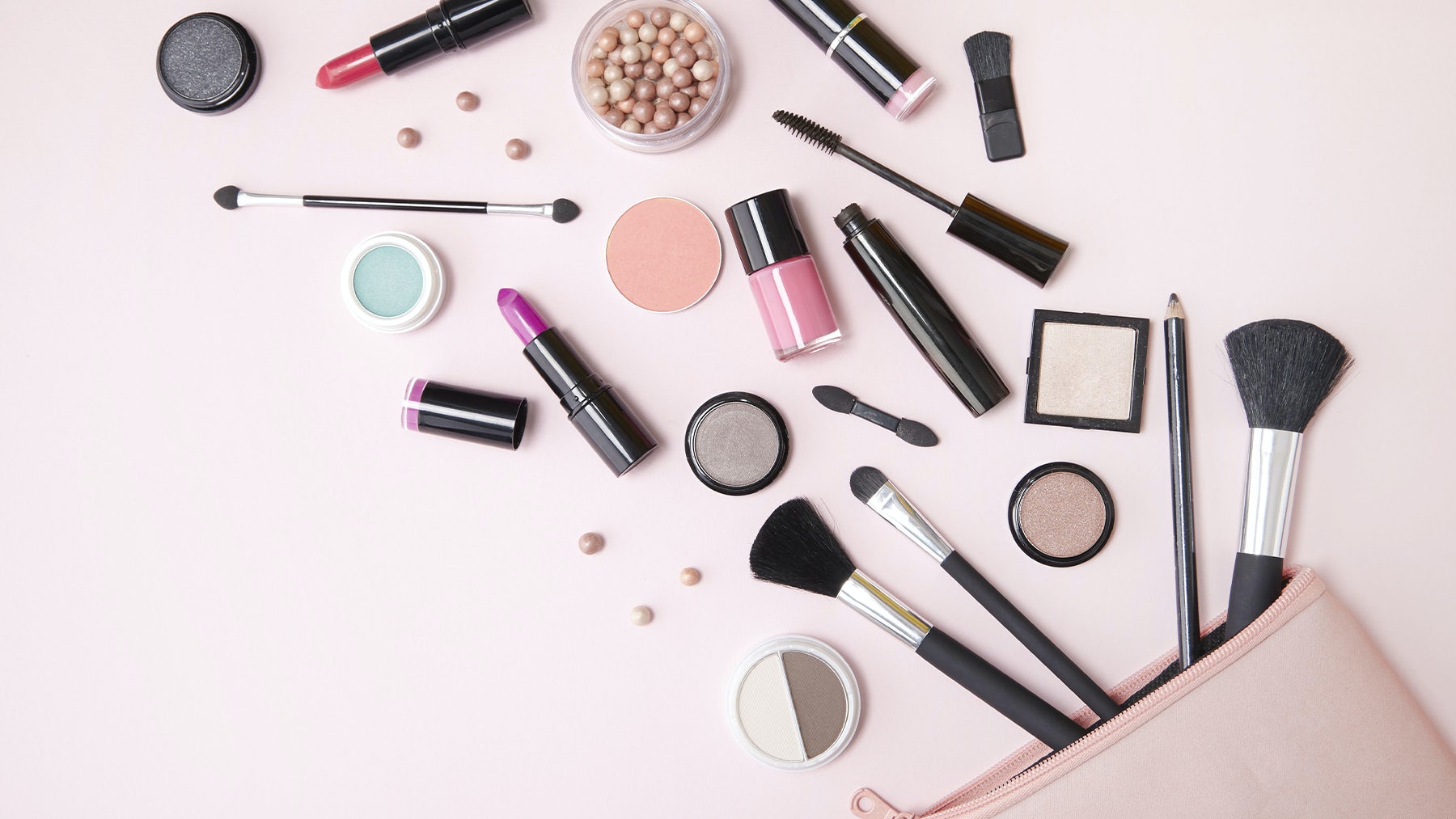 Call for ‘No Heavy Makeup’ on Celebrities Draws Backlash

Chinese state media has begun chastising actors who promote “twisted aesthetic standards” by wearing heavy makeup. An article in state-linked Guangming Daily by Beijing-based professor Zeng Qingrui called for films and TV shows to “say ‘no’ to heavy makeup,” the latest in a series of attempts to monitor how celebrities’ — particularly effeminate male celebrities — look. On social media platform Weibo, a hashtag relating to the article has been viewed more than 110 million times. Many netizens have responded negatively to the viral story. (Sixthtone)

Demand for collectible items, from sculptures to high-end watches, is on the rise among the Chinese, thanks in large part to a younger generation of collectors in the mainland going online to find luxury investments like jewellery, sneakers and handbags, while second-hand platforms like Plum are allowing less affluent shoppers to become first-time vintage collectors. That many of these consumers are searching for specific models rather than brands suggests that they see these items as investments. For luxury brands, the lesson is not to go overboard with limited edition products and focus on maintaining the value of their items. (Jing Daily) 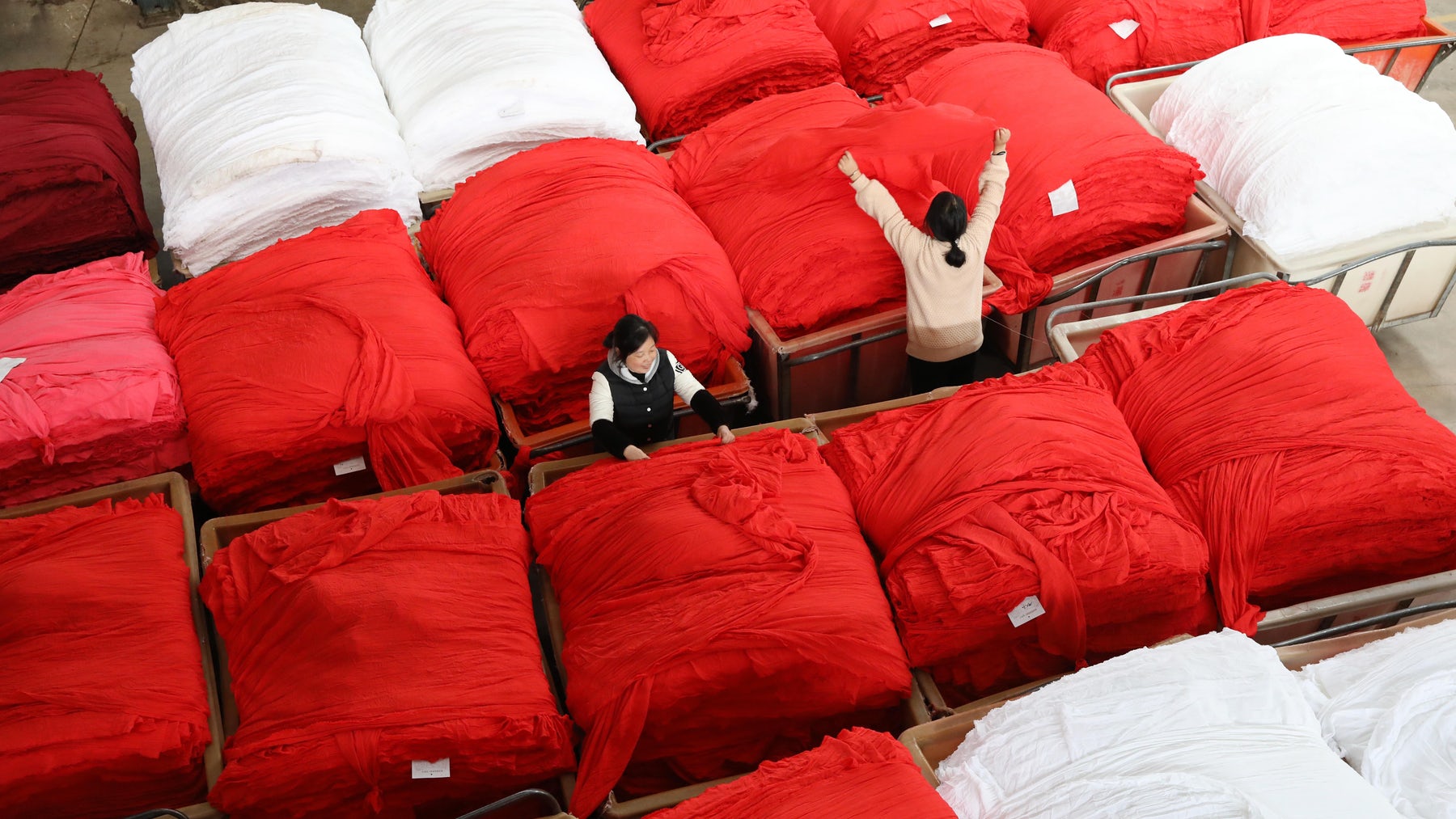 Planned shutdowns in industrial hubs like Jiangsu, Zhejiang and Guangdong could send prices of textiles and garments up in coming weeks. Getty Images.

In part due to severe electricity shortages in the country, planned shutdowns in industrial hubs like Jiangsu, Zhejiang and Guangdong could increase textile and garment prices in coming weeks, Fibre2Fashion reported. A source told Fibre2Fashion that new rules prohibit factories from opening for the full working week, estimating that local prices will rise by 30 to 40 percent as a result. The shutdowns could continue until December, given Beijing’s goals to curb emissions in the lead up to the Winter Olympics in February 2022. (BoF)

The trouble isn’t over for China’s real estate market: mid-sized developer Fantasia Holdings announced in a stock filing on Oct. 4 that it defaulted on a $206 million bond, while struggling property giant Evergrande, which missed an interest payment on a bond due Sept. 23 and triggered a 30-day grace period ahead of a formal default, has yet to make a statement on where it goes from here. Fantasia’s news adds to anxieties that Evergrande’s woes will spread to other firms in China’s real estate market. (FT)

China Decoded wants to hear from you. Send tips, suggestions, complaints and compliments to our Shanghai-based Asia Correspondent [email protected].