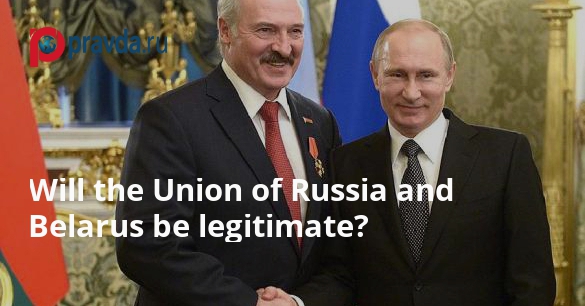 As November 4 approaches (on this day, Russia and Belarus are to sign union programs), disputes between supporters and opponents of the integration become increasingly heated.

Belarusians do not support integration with Russia

Euroradio.by published the result of a closed poll conducted by the All-Russian Public Opinion Research Centre (WCIOM), the representatives of the organisation neither confirmed nor refuted. The poll called into question the success of the scheduled event in particular and cast doubts on the prospects for integration between the two countries in general.

According to the aforementioned poll, only 25 percent of Belarusians support the idea of ​​setting up the unified state, whereas 66 percent of the polled expressed their opposition to such an initiative. Fifty-seven percent of respondents do not want Russia to strengthen its support for Alexander Lukashenko’s presidency (35% set out their support). This is probably the reason why Vladimir Putin has been losing popularity among residents of Belarus.

The poll also shows that three out of five citizens of Belarus want President Lukashenko to be removed from power. Lukashenko’s approval rating is not higher than 30 percent. It just so happens that the integration process carried out under Lukashenko’s aegis is doomed to failure.

We would like to note here that the 30-percent support for Lukashenko seems to be too high, because he treats his own people like dirt, depriving them of the freedom of speech.

Thus, more than 170 social media channels in Belarus (about 100 of them in Telegram) were declared extremist, and their followers may face prison terms of up to seven years just because they are subscribed to those channels.

In addition, people do not understand why Belarus buys natural gas from Russia at $128 per thousand cubic meters, but then sells it domestically with a markup of at least 70-100% (from $200 to $270 to the population and industrial enterprises). This is probably why the Belarusians are not interested in receiving such form of support from Russia as it comes as a support for the regime, rather than the people.

Forty-four of the polled said that they would be ready to take to the streets for protests. Alexander Lukashenko indirectly confirmed such sentiments, when he said that the state of affairs in the republic remains tense, and “opponents can use any pretext to aggravate the situation.”

In Russia, most people are still positive about the idea of the unified state with Belarus, but the number of its supporters continues decreasing. Fifty-six percent of respondents are confident that Russia and Belarus are not going to merge into one state during the upcoming years, a poll by the Public Opinion Foundation said.

According to this study, 58 percent of the Russians have never heard anything about the economic integration programs which are part of the process to unite the economies of the two countries.

Obviously, the Russian authorities do not see any need to advertise the plan – they will announce the creation of the unified state, and the Russians will buy into it. However, many in Russia would not be happy to hear that subsidising Belarus (more than $120 billion for various preferences over 20 years) does not at all make it a loyal Russian ally, and that Lukashenko does not find it necessary to recognise the Crimea as part of Russia. Needless to say that many would assume that such a union would not bring them any economic benefits whatsoever.

In fact, the Russian Federation takes the economy of Belarus on board, thereby postponing the time when Russian citizens could leave their own problems behind.

The union is not legitimate without the approval of the people

Current prices on natural gas in Europe deprive Lukashenko of any manoeuvre in relation to the start of the Russian-Belarusian economic integration. Will it be legitimate if the Belarusians do not support it, and the Russians strive for this opinion?

More than 20 years have passed since the signing of the document on the establishment of the Union State. A lot has changed in the minds of the two peoples. The generation of Soviet people which was nostalgic for the past, is stepping into the background and leaving. Young people are more pragmatic, apolitical and nationalist.