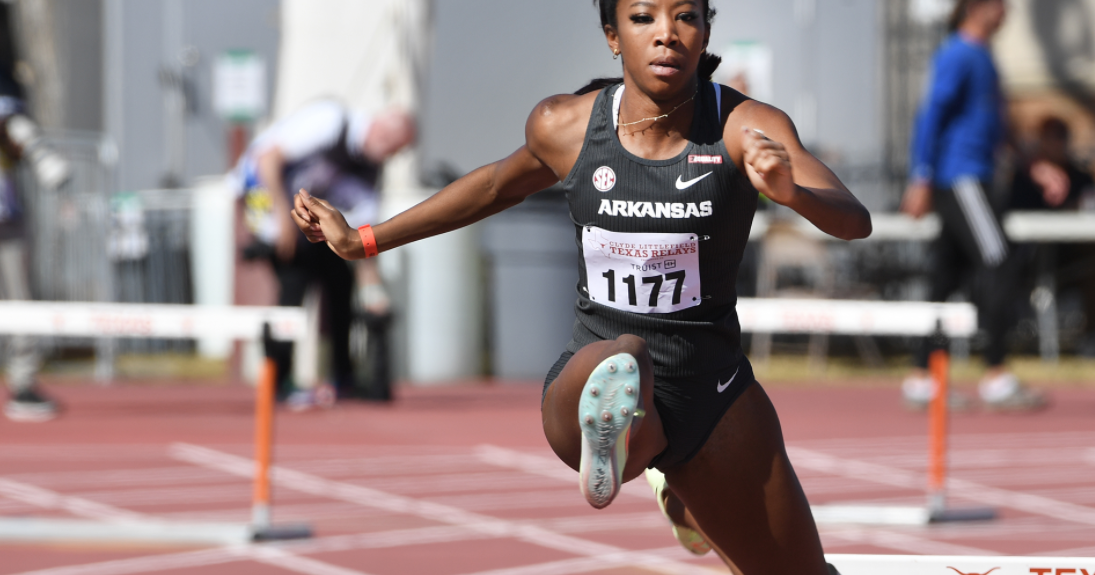 AUSTIN, Texas — In her first 400m hurdle race as a Razorback, Britton Wilson shattered Arkansas’ school record during the prelims of the 94th Texas Relays on Thursday at Mike A. Myers Stadium and produced the fastest time ever in the month of March by an American or collegian.

Racing in lane 7, Wilson cruised to a time of 54.65 seconds to challenge the meet record of 54.60 set in 2003 by Raasin McIntosh of Texas, which was run in April that season. Runner-up to Wilson in the first heat was Duke’s Lauren Hoffman with a 55.98, which was second overall among the 27 entrants racing in the prelims.

“She did a fantastic job,” stated Arkansas women’s associate head coach Chris Johnson said. “She’s run 50.88 indoors in the 400m, so that’s not too far off from our expectation, but maybe we didn’t expect it so early.

“There are still things we can work on to get better. We’re very proud of her and we’re going to celebrate the accomplishments and PRs and enjoy them because they don’t happen all the time. As her PR gets better, the tougher it gets to lower that time. So, it’s enjoyable and now we’ll try to get the win in the final on Friday.”

The previous UA record of 55.17 was established by Sparkle McKnight in 2013. Wilson’s previous collegiate best was 58.58 set at Tennessee while her previous career best of 56.36 was set in high school in 2019.

“It’s really exciting,” Britton noted. “The race went really well. I had a couple of rocky hurdles, but that is something we can work on technique-wise. Everything else went really good.

“It’s definitely different since I haven’t hurdled in so long, but it feels good and I think I’m in a good spot right now. I was actually quite shocked with the time. I felt good going over the hurdles, but I didn’t know if it would be a PR or even close to my PR. I was excited when I saw how fast it was.”

This is the fourth school record Wilson has been part of in her first season with the Razorbacks. Indoors she broke the 400m record with a 50.88 silver medal finish in the SEC Championships. Then she anchored the collegiate record of 3:24.09 Arkansas set in winning the SEC final as Wilson supplied a 49.83 anchor leg, the second fastest ever indoors.

In the 400m hurdles, Wilson is also the world leader in the event for the early 2022 outdoor season, surpassing a 55.36 by Zeney Van Der Walt of South Africa set on March 11.

The 800m Invitational was claimed by Razorback alum Shafiqua Maloney in a time of 2:04.59. Runner-up in 2:04.90 was Brooke Jaworski of Texas. Quinn Owen placed seventh in the heat, and ninth overall, with a 2:08.06, a career best outdoors.