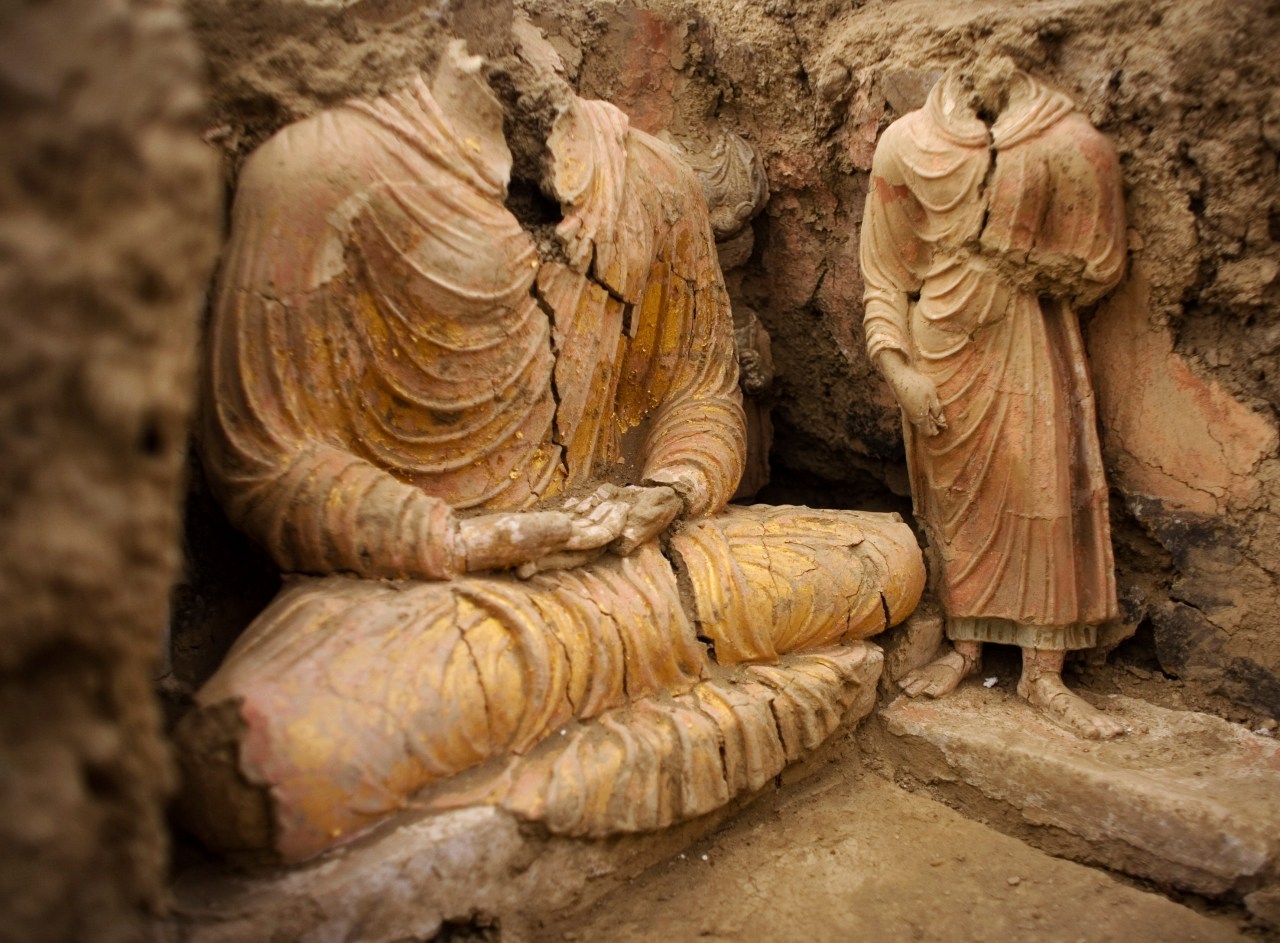 MES AYNAK, Afghanistan (AP) — The ancient Buddha statues sit in serene meditation in the caves carved into the russet cliffs of rural Afghanistan. Hundreds of meters below lies what is believed to be the world’s largest deposit of copper.

Afghanistan’s Taliban rulers are pinning their hopes on Beijing to turn that rich vein into revenue to salvage the cash-starved country amid crippling international sanctions.

The fighters standing guard by the rocky hillside may once have considered destroying the terracotta Buddhas. Two decades ago when the Islamic hard-line Taliban were first in power, they sparked world outrage by blowing up gigantic Buddha statues in another part of the country, calling them pagan symbols that must be purged.

But now they are intent on preserving the relics of the Mes Aynak copper mine. Doing so is key to unlocking billions in Chinese investment, said Hakumullah Mubariz, the Taliban head of security at the site, peering into the remnants of a monastery built by first-century Buddhist monks.

“Protecting them is very important to us and the Chinese,” he said.

Previously, Mubariz commanded a Taliban combat unit in the surrounding mountains battling with U.S.-backed Afghan forces. When those troops capitulated last year, his men rushed to secure the site. “We knew it would be important for the country,” he said.

The Taliban’s spectacular reversal illustrates the powerful allure of Afghanistan’s untapped mining sector. Successive authorities have seen the country’s mineral riches, estimated to be worth $1 trillion, as the key to a prosperous future, but none have been able to develop them amid the continual war and violence. Now, multiple countries, including Iran, Russia and Turkey are looking to invest, filling the vacuum left in the wake of the chaotic U.S. withdrawal.

But Beijing is the most assertive. At Mes Aynak, it could become the first major power to take on a large-scale project in Taliban-controlled Afghanistan, potentially redrawing Asia’s geopolitical map.

In 2008, the administration of Hamid Karzai signed a 30-year contract with a Chinese joint venture called MCC to extract high-grade copper from Mes Aynak. Studies show the site holds up to 12 million tons of the mineral.

But the project got tied up in logistical and contract problems, and it never got past some initial test shafts before it ground to a halt when Chinese staff left in 2014 because of continued violence.

Ziad Rashidi, the ministry’s director of foreign relations, approached the consortium made up by MCC, China Metallurgical Group Corporation and Jiangxi Copper Ltd. Dilawar has had two virtual meetings with MCC in the last six months, according to company and ministry officials. He urged them to return to the mine, terms unchanged from the 2008 contract.

A technical committee from MCC is due in Kabul in the coming weeks to address the remaining obstacles. Relocating the artifacts is key. But MCC is also seeking to renegotiate terms, particularly to reduce taxes and slash the 19.5% royalty rate by nearly half, the percentage owed to the government per ton of copper sold.

“Chinese companies see the current situation as ideal for them. There is a lack of international competitors and a lot of support from the government side,” Rashidi said.

China’s ambassador to Afghanistan has said talks are ongoing, but nothing more.

Acquiring rare minerals is key for Beijing to maintain its standing as a global manufacturing powerhouse. While stopping short of recognizing the Taliban government, China has stood out from the international community by calling for the unfreezing of Afghan assets and has kept its diplomatic mission running in Kabul.

For Afghanistan, the contract at Mes Aynak could bring in $250-300 million per year to state revenues, a 17% increase, as well as $800 million in fees over the contract’s length, according to government and company officials. That’s a significant sum as the country grapples with widespread poverty, exacerbated by financial shortfalls after the Biden administration froze Afghan assets and international organizations halted donor funds. Some has since resumed.

At Mes Aynak, a 2,000-year-old Buddhist city sits uncomfortably alongside a potential economic engine. Afghanistan’s tumultuous modern history has gotten in the way of both exploring the archaeology and developing the mines.

Discovered in the 1960s by French geologists, the site was believed to have been an important stop along the Silk Road from the early centuries AD.

After the Soviet invasion in the late 1970s, Russians dug tunnels to investigate the copper deposit; the cavernous bore holes are still visible. These were later used as an al-Qaida hideout, and at least one was bombed by the U.S. in 2001.

Looters then pillaged many antiquities from the site. Still, archaeologists who came in 2004 managed a partial excavation, uncovering remnants of a vast complex, including four monasteries, ancient copper workshops and a citadel. It became clear the area had been a major Buddhist settlement, a crossroads for traders coming from the west, and pilgrims from afar, even China.

To the shock of the non-Taliban technocrats in his own ministry, Dilawar is committed to saving the site and told MCC’s director in Beijing it was an important part of Afghanistan’s history, according to two officials present in one virtual meeting.

He dismissed open-pit mining schemes that would raze the site entirely. The alternative option of underground mining was judged too pricey by MCC. The Culture Ministry has been tasked with presenting a plan to relocate the relics, most likely to the Kabul Museum.

“We have already transferred some (artifacts) to the capital, and we are working to transfer the rest, so the mining work can begin,” Dilawar told The Associated Press.

While the ministry is optimistic a deal can be reached, MCC officials are cautious and pragmatic.

They did not speak to the AP on record, citing sensitivities around the talks happening while international sanctions still prohibit dealings with the Taliban.

They expressed concerns over the feasibility of other contractual obligations, including building a railway to the Pakistan border at Torkham, a coal-fired power plant, and community amenities such as a hospital and schools.

Another issue is how to compensate residents of three villages near Mes Aynak cleared out a decade ago.

Mullah Mera Jan, a 70-year-old local elder, said he is still waiting for funds promised to him by ministry officials after being forced out of his village of Wali Baba.

Still, he too hopes mining will start soon. Villagers were promised 3,000-4,000 direct and 35,000 indirect jobs. The men from his village are on top of the hiring list.

Knocking on Rashidi’s office door these days are Russians, Iranians, Turks and of course, the Chinese.

All are “in a great hurry to invest,” he said. Chinese interest is “extraordinary,” he said. Rashidi has also reached out to China’s CNPCI to revamp an oil contract to explore blocks in Amu Darya near the Turkmenistan border, terminated in 2018.

Dozens of small-scale contracts have been handed out local investors, many of whom have joint ventures with international companies, mainly Chinese and Iranian.

Ministry revenues have increased exponentially, from 110 million afghanis ($1.2 million) in the year preceding the Taliban takeover, to $6 billion afghanis ($67 million) in the six months since the Taliban assumed power, according to documents seen by the AP. Most of that, however, appears to be from more aggressive taxing, as the Taliban merged their informal tax economy with that of the government. Apart from coal, it not clear if actual mining production has increased.

Ironically, it was the Taliban that hindered work in Mes Aynak for over a decade.

An MCC official recalled how the road leading to the mine was laden with IEDs targeting Afghan forces and NATO allies. An entire Afghan regiment guarded Chinese engineers at the site compound. Mubariz, now the security chief, said he remembered watching them from the mountains where he plotted attacks.

The MCC official said that when his Taliban hosts told him they had restored safety so work could resume, he replied in jest, “Wasn’t it you who was attacking us?”

The men, machine-guns slung around their necks, laughed too.