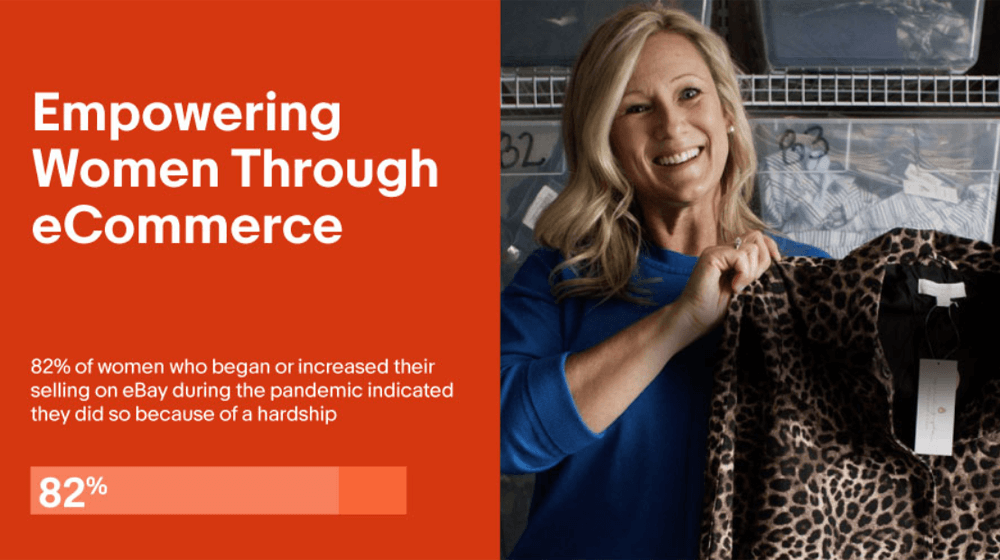 Women have responded to the pandemic and its unprecedented disruption by doing more ecommerce business.

Research finds that eBay has been a primary driver in creating an environment for equitable entrepreneurship for women.

According to the Equitable Entrepreneurship: Empowering Women Through eCommerce report, complied by eBay Main Street, which monitor and participates in a variety of legislative and regulatory issues on behalf of the eBay community, ecommerce opportunities on eBay have helped women deal with the economic and social challenges of the Covid-19 pandemic.

Based on the findings of the research, eBay Main Street composed an infographic, highlighting key takeaways of the report, including the reasons for the surge in eBay selling among women.

Women Took Up or Increased eBay Activity Because of Hardship

82% of women who began or increased selling activity on eBay during the pandemic did so because of hardship. The reasons for the female-centric hardship have been attributed to women being likelier to work in sectors hit hard by the pandemic. These industries include hospitality, foodservice, and in-store retail.

Motivating Factors for Selling on eBay

73% of the women surveyed for the report cited needing to earn an independent income as the top motivating factor for their ecommerce activity. 74% highlighted being able to work from home as the most important benefit of selling on eBay.

The specific reasons women increasingly turned to selling on eBay efforts during the pandemic were also raised in the report. 82% of participants said they either started to sell or increased their selling activities because of losing their jobs, a reduction of income, illness, loss of childcare, or some other hardship.

The report shows the international selling opportunities eBay provides. 97% of the women-owned small businesses on eBay export their products, reaching 16 different countries on average each year.

eBay Main Street’s research demonstrates how having access to ecommerce opportunities has helped women, whether it’s small business owners or entrepreneurial individuals, overcome the immense economic and social challenges the pandemic left in its path.